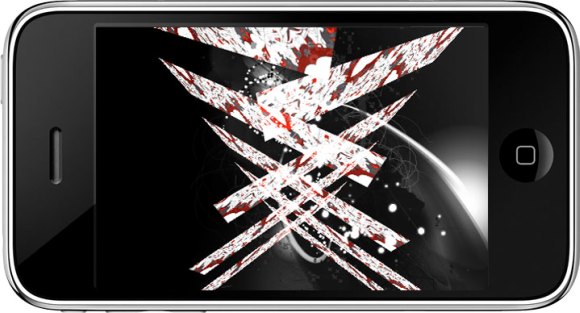 Reflect by Joshua Davis – separate post on this coming, Joshua!

When the iPhone was first unveiled, many of us hoped that was was effectively a palm-sized Mac could be used with some of the same freedom that a computer could, that its screen could be used for pocketable art. That transformation has unquestionably come to pass. The iPhone hardware itself isn’t actually all the different from a lot of other smart phones, but Apple has made access to audio and graphics systems easier than on many other devices. Case in point: the Android platform from Google works with OpenGL ES, but it’s limited in the sound department and is only now beginning to add the ability to incorporate native code libraries – which, in turn, can’t access sound. My sense is that other platforms will get there – in fact, that they need to get there – but then that only underlines the point. The iPhone is a strong vision of how these technologies can come together right now.

With an audience already accustomed to buying media via iTunes, artists are also able to reach out with these mobile creations. From experimental games to interactive toys to generative artwork, those artists have already found a terrific rage of possibilities.

Jonah Brucker-Cohen of coin-operated, a talented artist himself as well as researcher, author, and all-around cool guy, has what I think is the best-yet round-up of visualist-friendly iPhone platform artwork, for Rhizome:

Art In Your Pocket: iPhone and iPod Touch App Art

I suspect we’re about to see a flood of this stuff, as well, especially with resources like Memo’s guide to using OpenFrameworks on the platform:

I’m a huge fan of native apps, and I don’t think everything should live in the browser. But one topic I haven’t seen covered yet that I hope will be is how to leverage the intelligent, faster JavaScript-powered browser and HTML work. With a little effort, it’s even possible to access hardware and pull of other tricks that are usually off-limits, and now Palm Pre, Android, and iPhone all share similar WebKit-based browsers. Thoughts, commenters? (I’ve been having a couple of people bug me about this, as well, and keep running into WebKit contributors.) If nothing else, the above round-up shows that, if a technology is available, someone can make it art.

Making it as a New Artist: Trent Reznor and Techdirt Founder on What to Do Now