Kyle McLean is quick. He’s apparently quick at connecting together visual wonders in the multimedia patching environment vvvv, and he’s now focused on an environment that allows augmented projection to be “sketched” quickly onto surfaces. That speed doesn’t mean laziness, though: it means the ability to be improvisational with creative ideas.

everyoneishappy.com
I developed a very fast and flexible projection mapping system which we were asked to present at Pecha Kucha Brisbane. This was part of that demonstration, however the same setup can very rapidly map out all sorts of shapes.

There are a couple of cuts, but NO post FX at all, I promise. Developed in VVVV.

Check out Kyle’s work previously. This makes me want to have my next audiovisual event out in a public square somewhere. (Why do I have a feeling Chase Manhattan Plaza next to my place would not be so into a nighttime rave? Or maybe we could go in front of Goldman Sachs; I think they owe society.)

vvvv deserves some credit here, too, for supporting an environment that makes dealing with textures, visuals, and 3D uncommonly elegant. I wish there were an equivalent for OpenGL and not just vvvv’s DirectX, but in the meantime, I can stand in awe. It’s not an image from Kyle’s project, but here’s what the vvvv interface looks like: 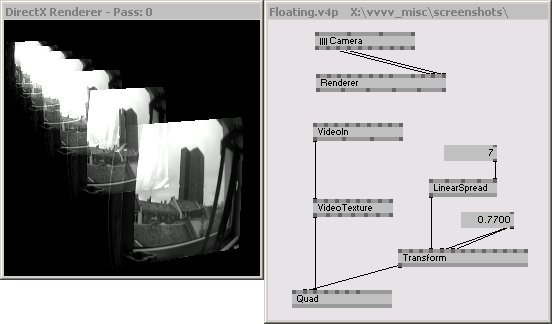