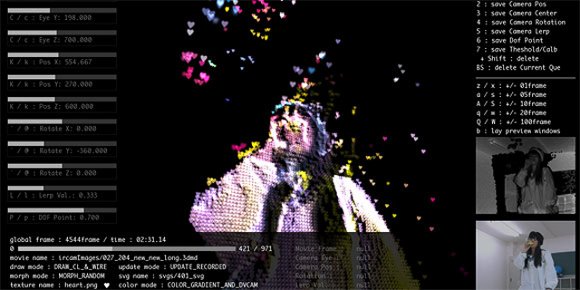 Kyle McDonald’s free 3D scanning techniques are spreading at near-viral rates. As seen here on CDM and in an Instructable, the technique now finds its way into a project for Japanese recording artist Yakushimaru Etsuko on her single “Venus & Jesus.” (I missed this some time ago, but it’s well worth covering, even late.)

What’s especially nice here – aside from the appearance of one of our favorite multimedia developers, Daito Manabe – is the clever way in which the act crosses media. Not only do you get a music video (evidently programmed in OpenFrameworks), but there’s a Flash-based Web interface, too, in which fans can play with the technique and manipulate the data.

Really quite beautiful work, here, I think, not straying far from the basic technique but exquisite to watch, nonetheless.

Check it out:
Flash app
Video on iTunes
http://yakushimaruetsuko.com/

Via Rhizomatiks blog and Creative Applications, both of which deserve a place in your RSS reader.