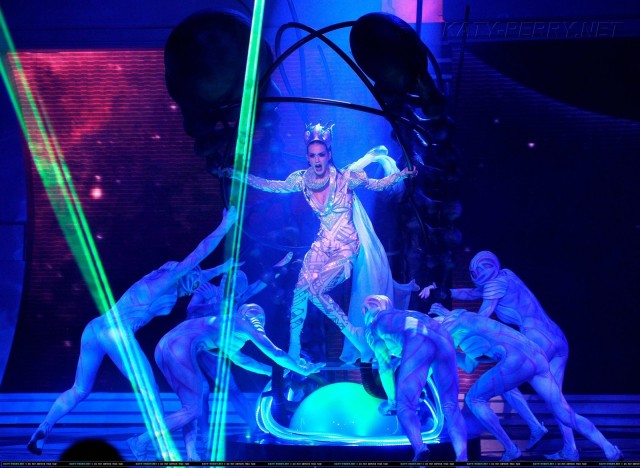 Digital visual effects need not be limited to projection. CuteCircuit have been one of a select handful of designers pushing the envelope with wearables. Here, Katy Perry becomes their celebrity canvas, in what I expect will be one of the only-ever appearances of American Idol on CDM.

The actual costume design, though, is fantastic. Thousands of interactive LEDs are a digital mirror to the countless sparkling Swarovski crystals that festoon the garment, with UK-based sculptor Yasemen Hussein adding her striking Baroque extraterrestrial forms. (She’s not a digital artist, but check out her work.)

I’m struck in a way that there isn’t more of this sort of work – perhaps because the challenges of interactive circuitry atop the challenges of conventional fashion design weed out the pack. The enabling factor may be the growth of LED light sources, which, against all technical odds, humanity is betting can replace incandescent and fluorescent sources in the coming years. Better LED tech can only mean better LED garments, if innovative manufacturers can pull it off.

CuteCircuit have certainly been at the forefront of this nascent field. The co-founders themselves lie at the intersections of disciplines – Francesca Rosella came from fashion design and the likes of Valentino and Esprit; Ryan Genz was a designer, musician, and, yes, “anthropologist.” Together, they formed the smart textile fashion firm in London.

CuteCircuit productize their work, a bit more of which I’ve sampled below.

But what’s significant here is that the interactive quality of the garments make them more than just sparkly effect. They become dynamic, controllable canvases for live visual performers. Just as projection mapping (really, just more creative projection) has expanded the palette of the VJ and visualist, so, too, can garments that themselves become interactive visual surfaces. Watch that result with Katy Perry, and other garments below:

The Kinetic Dress drives the EL wire based on movement, making the person moving in the garment the performer.

And for sheer quantity of LEDs, here’s CuteCircuit’s GalaxyDress at MSI – some 24,000 LEDs.

With enough LEDs, video can absolutely become practical. In the video above, Hussein Chalayan’s dresses become video surfaces, as seen in the studio of Moritz Waldemeyer.

Not CuteCircuit-specific, but here’s a feature on wearable tech from 2009: