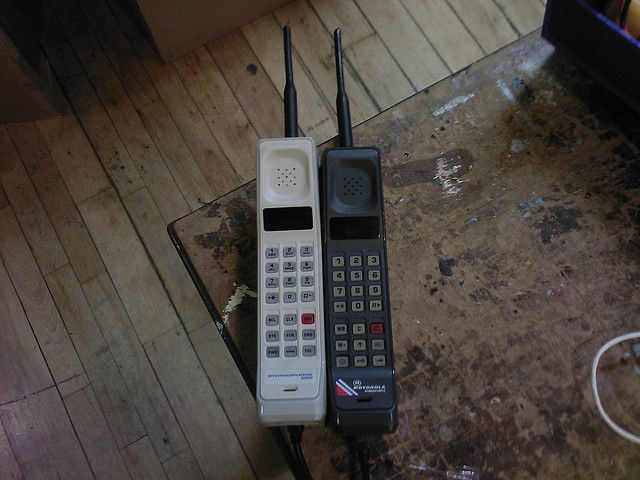 You’ve come a long way, baby. In fact, in the midst of this whole debate, consider what phones can do – and what they’ll be able to do soon. As an artist, that’s incredibly compelling. Photo (CC-BY) Fred Benenson.

While ZDNet stands behind the story, this should be classified as “rumor” until an official statement has been made, and my comments considered accordingly speculative.

Updated: the official announcement. Note what it says – yes, it’s wordy, but there are two pieces here. One is, Adobe is committing to contributing to HTML5, which is to say, to make Web standards do more than they do now. We’ll have to watch to see if they deliver on the commitment, and in what form. The other is a renewed investment in AIR – that is, Adobe tech (including, presumably, bits of Flash Player for mobile) in apps packaged using Adobe’s tools for different platforms, but not delivered inside webpages.

Flash to Focus on PC Browsing and Mobile Apps; Adobe to More Aggressively Contribute to HTML5

Odds are this is not the end of a chapter, but the beginning. Original ZDNet scoop that Adobe would drop Flash Player on mobile in place of a renewed focus on native, HTML5-based Web tech, and AIR:
Exclusive: Adobe ceases development on mobile browser Flash, refocuses efforts on HTML5 [ZDNet]

To me, Adobe’s decision is the result of momentum from all corners of the Web community, not just from Apple – though I think in retrospect, Apple’s decision to immediately dump Flash, much like dumping old serial ports and floppy drives on the iMac, was absolutely prescient, and to argue otherwise would be silly. What’s exciting to me now is the ongoing innovation from all circles. Replacing Flash on mobile isn’t just the result of having video support through other means; it’s also the extraordinary work done with animation and canvas and CSS3. In fact, it goes beyond just “HTML5,” as some people are certain to correct shortly. It’s the whole cluster of technologies that make up the so-called “Open Web,” and readers and this site have argued in the past, that’s likely to be a lucrative area for Adobe.

It’s also worth noting what this isn’t: this isn’t a retreat from the AIR framework; it’s quite the opposite, you’ll see the report notes that in absence of energy spent on Flash, the focus is on native development using AIR. (And that means Apple’s vision for what development looks like isn’t entirely realized here.)

That said, make no mistake: because of the importance of video, I think there’s no question that this decision will re-ignite the controversy over what codec should make up the future of the “open Web.” This debate isn’t likely to be any easier or more fun than it was the last … umpteen times. But you will see it again, no question.

As the Web discussion is likely to focus blindly on iOS-versus-Android, rah rah team sports quasi-journalism (snore), I think there’s a bigger theme here. A lot of the awesomeness of “HTML5” or the “Open Web” includes stuff that just doesn’t run yet on mobile – WebGL being one huge, glaring example for which a lot of us are really hungry.

As with the video discussion, look instead for this to be the first chapter. And I were developing any mobile platform, I’d be working on how to innovate fastest with support for things like video codecs, accelerated playback, high-performance animation on the canvas, and WebGL. These are the areas where mobile devices and browsers are likely to leapfrog one another, and they’ll have the hardware horsepower under the hood to begin to explore these areas more successfully. And kudos to Apple for, even by force, eventually having the impact of reframing the debate on those issues and not whether or not devices run Flash.

It’s not just “dumping Flash” that creates a benefit for users, as Daring Fireball argues, in the midst of a full blown “I told you so” rant. Think back to the iMac: it was what you could do with USB and the disc drive and the network connections that made the iMac exciting, not just the removal of the technologies that you replaced. It’s what you can do with the Web that makes the omission of Flash feasible and even powerful, and despite what Gruber argues about iPhone users in 2007, the mobile Web is a lot more interesting in 2011 than 2007.

At this point, I think we can look directly into the future rather than into the past.

And with that in mind, I’d argue that, as artists, we should look beyond the fanboys and nit-picking details of implementation. Think of the big picture, and I think the importance of supporting technologies that last, that are open and that can be conveyed across platforms and devices, come into sharper relief. “Canvas” is a fitting word for what the Web browser tech gives us – and, in some sense, even native development. Our mobile devices are extraordinary canvases for expression. That makes both the used devices people are discarding in the endless upgrade carousel, and the futuristic device we haven’t yet seen, a compelling opportunity for art and expression.

And the photo at the top says that better than anything I could put into words. We live in extraordinary times.

Your Body – to – Ableton Live Interfaces, with Max for Live, Kinect