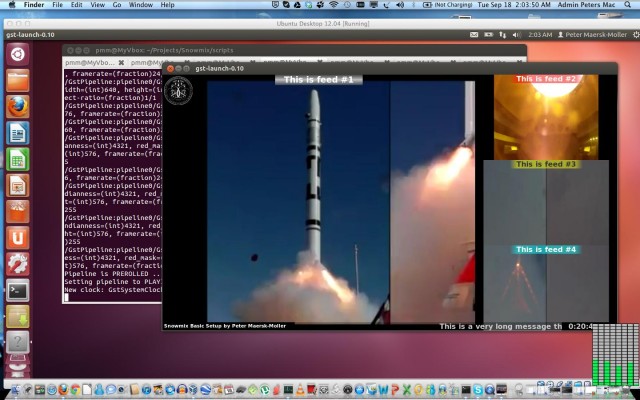 As many ponder the fate of hardware mixing, mixing in software continues to advance. And in a reminder of just how many different applications video mixing can have, here’s a fascinating article about a new open-source Linux-based video mixing tool called Snowmix:

What’s fascinating about it is that this didn’t come from VJs or broadcasters, but people who are experimenting in DIY, non-profit human sub-orbital flight (the Copenhagen Suborbitals). There’s something really touching about watching them go from one video feed to another on rockets – perhaps that sense of romance of the heyday of NASA, of dreaming of Space Camp and astronauts. (Hey, not all video mixing has to be switching between layers of the kaleidoscope and the silhouetted dancing girls. Ahem.)

In fact, this isn’t even the only example of synergy between spaceflight and video tools. The open-source Milkymist video effects hardware worked in the opposite direction:

NASA’s Communication Navigation and Networking Reconfigurable Testbed (CoNNeCT) experiment uses the memory controller that was originally developed for the Milkymist system-on-chip[1] and published under the GNU GPL.

Pretty awesome to have tech you developed wind up in space. Source: Sebastien Bourdeauducq / Wikipedia

As for this (software) mixer, the feature list is impressive:

And, of course, this could be useful I expect for visualists, even if you’re not trying to launch a rocket. If you give it a try, we’d love to know how it works for you – or if you’ve found another, similar solution. Download – or peruse source – at:

And you thought the Danes only cared about bicycles.