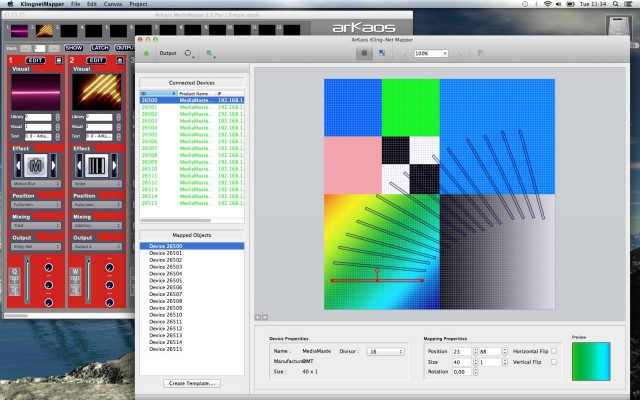 ArKaos promises to make output to LED surfaces easier. Marco from ArKaos explains what we see here: “[This is the] Kling-Net mapper working with MediaMaster in Simple mode. In simple mode each layer can be sent to the video mapper or the Kling-Net mapper. In this screen shot layer 1 goes to Kling-Net and layer 2 goes to the video surface.”

It sounds like the computer system on a Bird of Prey on Star Trek, but Kling-Net is at the heart of where VJ and media server maker ArKaos – and a lot of the live visual world – is headed. Forget the phrase “projection mapping,” and think “video mapping” and “pixel mapping.” Yes, projectors will still be a big part of live visuals. But they’ll be just one outlet for visual performance, alongside increasingly-sophisticated LED lighting. And LED lighting is increasingly looking like a major choice in installations.

Let me put that in less technical terms: more bright shiny, shiny from the LEDs.

So, LED is amazing technology for visualization. But it can also be amazingly hard to set up. The race now becomes about how to make that technology easier to access. ArKaos’ play is doing just that with Kling-Net. (Kahplah! Sorry, I’ll stop that now.)

It’s not rocket science to do cool stuff like this with pricey media servers sold for expensive applications. But what about the independent visual artists, the experimental creators pushing the envelope? The good news is, ArKaos is bringing the same media server tech back to GrandVJ, an app that’s far more affordable.

Marco Hinic is engine architect and CEO of ArKaos and creator of Kling-Net. (I love that, in this business, the engineers typically run the show.) Marco tells CDM about what their goals are for the tech:

Kling-Net has been designed to create plug and play LED devices and we are converting more and more manufacturers to work with us. There is nothing else like that on the market and we hope it will enable a new level of integration for many users.

The good news is that we will also support Kling-Net in GrandVJ. Indeed this why we are late with releasing GrandVJ, while working on the video mapper in MediaMaster we added the functionality where a layer can be sent to a mapping surface and / or to Kling-Net – ArtNet. To support that in GrandVJ we need to rework it’s core engine and that’s what we are doing now… We are now looking forward to present that at NAMM with ADJ. Ed.: NAMM is the music trade show in California held in January. Mark your calendars. -PK

The other side of the equation, apart from ArKaos’ software, is the lighting fixtures. Recently, ArKaos announced Chauvet is bringing Kling-Net support to their lighting, which you can see in the video and image below. 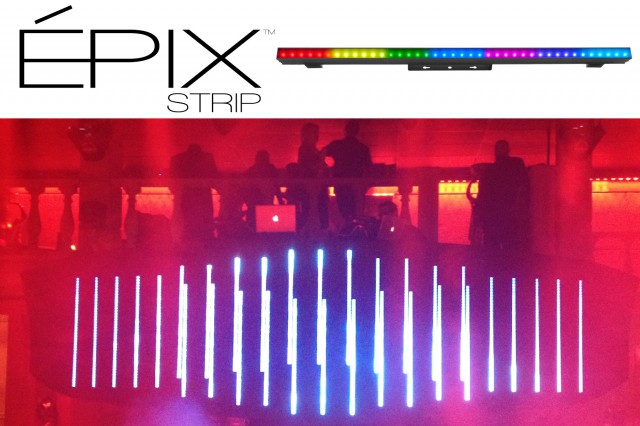 Chauvet’s EPIX strip product, as seen in a permanent club installation at Ft. Lauderdale, Florida’s club Off the Hookah.

Kling-Net is a complex technology, so I’ll do two things. First, I’ll direct you to ArKaos’ site that explains how this works:
Kling-Net @ ArKaos

Second, I ask you to tell us what your experience is with these kinds of applications, and what you’d like to know. We’re fortunate enough to get to talk directly to Marco about the technology he engineered, so, seriously, ask anything. I look forward to your questions.

development
CLAP is a new open-source plug-in format from Bitwig, u-he – do we need it, and who will use it?
live-visualsVJ
Resolume 7.12 now syncs your live visuals with Pioneer DJ gear – among other goodies
VJ
EboSuite 2.0 hands-on: live video recording and more makes VJing feel native in Ableton Live
lightingVJ
Dart, a line of open source MIDI and DMX controllers, in wonderfully wacky variations