Baarregaard & Briem – “Love With You” from Harald Haraldsson on Vimeo.

It begins with the hopping groove of a house track, and it’s shot using only light, projection, and an array of empty bookshelves. But somehow in the volumes of those shelves, Icelandic director Harald Haraldsson creates an abstract expressionist composition, rotating in fragmented spaces.

The black-and-white narrative behind then takes on a kind of architecture – stereotyped emotions, confined in structures like a sort of neon-colored neuro-scientific portrait. It adds a new layer of drama to the dancefloor-friendly ballad, the work of Baarregaard & Briem, a collaboration between producer B.G. Baarregaard and singer/actor Alexander Briem.

Oh, yeah, and the whole thing looks damned slick. You might be tempted to head to IKEA, buy a projector, and give away all your books. 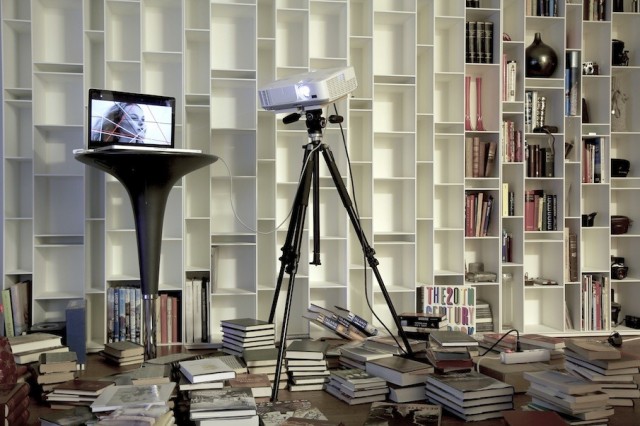 Composing image to music is, of course, what we’re all about. So asked the Reykjavik-based artist Harald about his process and ideas.

Peter: How do you think about form in these works – temporal or spatial?

Harald: Music videos are very temporal in nature – obviously – it’s fascinating to be able to connect visual elements to details in the music: like a hi-hat here and a bass synth there. This project has a very strong spatial component as well, with the edges of the bookshelves emphasized by the fractured light beams, in addition to the camera movement.

I’m fascinated by translating between musical composition and visual composition. What does that sort of translation mean to you – in this work? Generally?

Agree completely. The plan here with the video was to build it up in line with song, which has a very clear climax. Since the scenario is limited to the bookshelves and the black & white performance material, I used the combination of colors, camera movement, and bringing more dynamics to the performers as the song progresses. By this I hope that the whole experience comes together for the viewer, both visual and music compositions are in sync.

How did this particular imagery come to you from the music?
My first impression when I heard the song was “near-future pop music”, and that’s what I set out to visualize. Somehow that ended up as sharp geometric forms and colors, by using the bookshelves in my living room.

Technical question, perhaps less interesting than those above — seems there’s some sophisticated use of a dolly here, or is that all after fact?
The video was shot on a Canon EOS 550D DSLR camera with a simple slider/track to get the camera movement. Crew: 1 person (me). I shot the performance (projected) material in my studio a few weeks before shooting the bookshelves material.

How does this relate to some of the other work you’ve done – which I’ve, incidentally, greatly enjoyed? Is there some evolution for you in this particular work?
I guess this relates to my previous installation PRISMA 1666 in terms of visual appearance. The evolution here is that I’m moving from an installation output to a music video medium yet still using similar approach to the creative process and techniques. This is definitely where I’m heading with my work, bringing the technologies and ideas from the interactive installation & creative coding world to the video medium.

Any surprises (creative or technical) in making this?
Yes, it took a long time to edit – but I never got bored of the song!

That’s good news! We’ll visit some more of Harald’s work, but in the meantime, the full story from the press release, after some images: 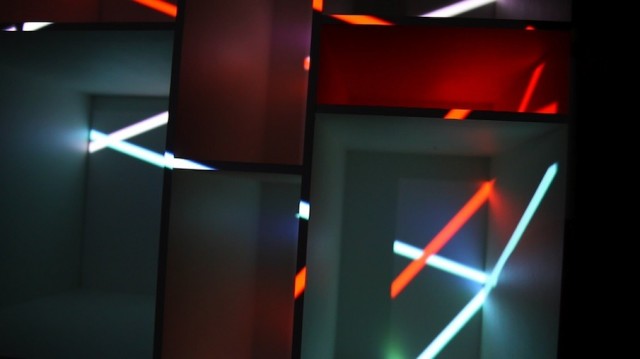 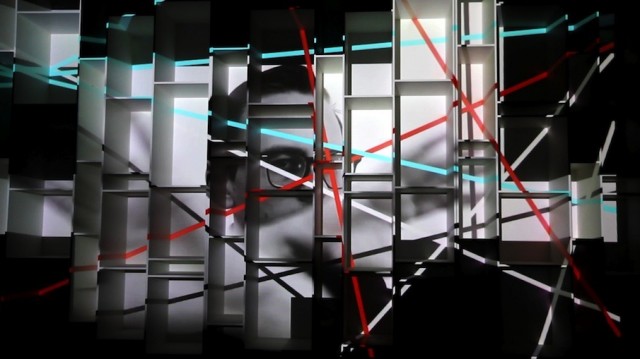 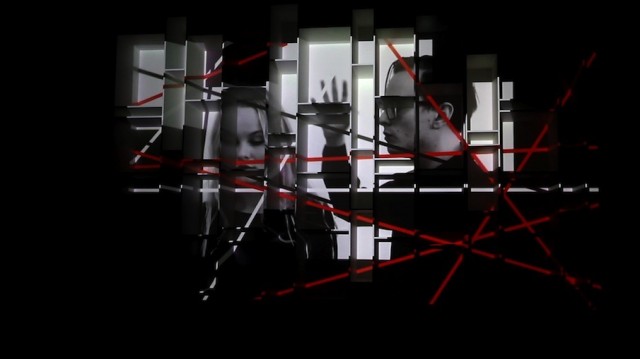 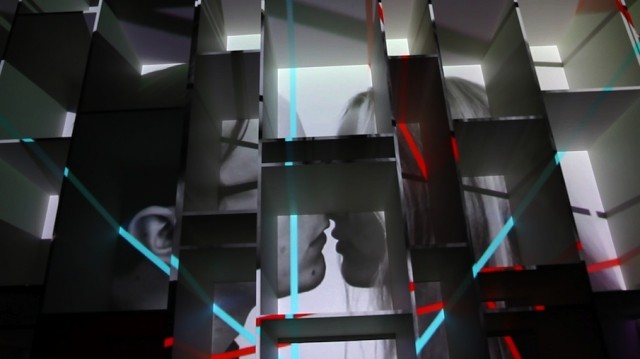 The video was shot over the course of one night, using Random bookshelves from MDF Italia as a projection surface, emphasizing the sharp geometry of the well known bookshelf design. Using custom software, Haraldsson controlled the minimal visual effects through delaying color channels and generating slowly rotating lines that
break upon the edges of the bookshelves.

The video visualizes the song’s arc by using colors, camera movement, and a slowly intensified motion of the actors, reaching the song’s climax as the two lovers approach each other.

This is Haraldsson’s first venture into music videos, having until now created interactive installations and directed commercials, with one of his projects featuring giant industrial robots (http://haraldharaldsson.com/Moments) – in line with Haraldsson’s technical approach to visual arts.

About the music:
Baarregaard & Briem is the musical collaboration between the Reykjavik-based producer B.G. Baarregaard and singer/actor Alexander Briem. “Love With You” is their second output, released through the independent Icelandic electronic music label Imola Nights.
https://soundcloud.com/baarregaard

About the director:
Harald Haraldsson is a visual artist and director applying computational and interactive techniques to different mediums. His work frequently references structures, geometry and electronic sounds. Haraldsson experiments through a portfolio of speculative research activities, with his work comprising technology, film, and design. A native of Iceland, Haraldsson holds a master’s degree in engineering from Tokyo Institute of Technology.
http://haraldharaldsson.com/