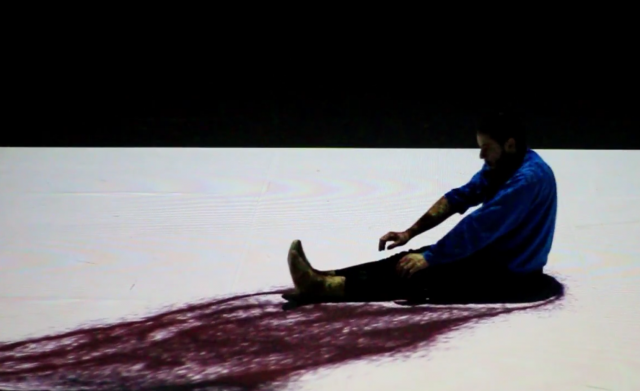 Installation work by Arístides Garcia, working on an ongoing thread of body and projection.

Get ready for the high Renaissance of the digital.

The individual ingredients remain the same. But the threads of transmedia work, spanning everything from traditional costume design and choreography to the latest generative projections, draw ever closer.

A new generation of artists treats projection in the theater as something elemental, something that demands exploration.

Vitruvian, premiering its latest iteration in Berlin Friday as part of our event unrender with LEHRTER SIEBZEHN, has gradually evolved in the ways it interweaves dance with opera, projected visualization and interactive sound with dance theater. An “interactive opera” in one act, it unapologetically adds digital imagery as an additional performer. But the human body insistently remains, in movement and voice, bathed in electronic light but not upstaged.

Just reading the bios of these artists is telling. True to the Renaissance icon the piece references, Leonardo, these are artists who are coders and conventional artists, drawing primarily from neither source.

The latest trailers and teasers give a bit of a taste of what they’re on, but consider this a preview. I think part of the challenge of this kind of work is that it tends to multiply the requirements for development and rehearsal geometrically. And it does that not only on the obvious technical side, but my making greater demands on the performers, too – it adds additional burden. But that’s also what makes it more exciting, and why I believe it’s essential to get these pieces in regular workshops and performances. Opera, the original transmedia spectacle, does the same: the convergence of different disciplines adds development atop development, even before you add digital technology.

Case in point: this is what warmup looks like when you’re making this sort of work.

Warm up all;) from Tatsuru Arai on Vimeo.

So, we’ll see where they go next. Here’s more on the artists, from traditional performance to computers, A to vvvv (speaking of which, don’t miss the various vvvv constructions from Arístides available on his Tumblr: 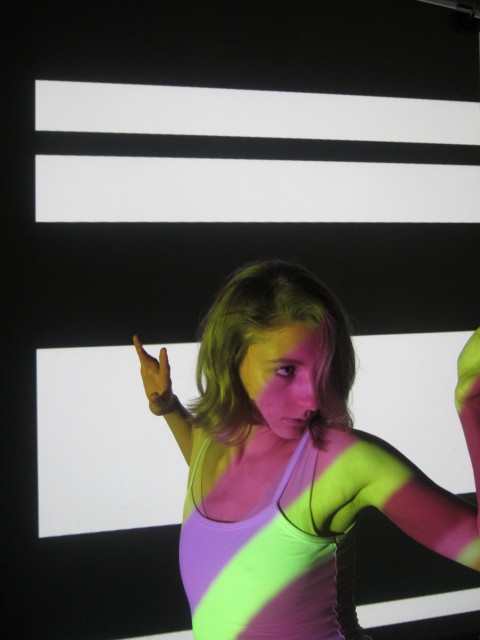 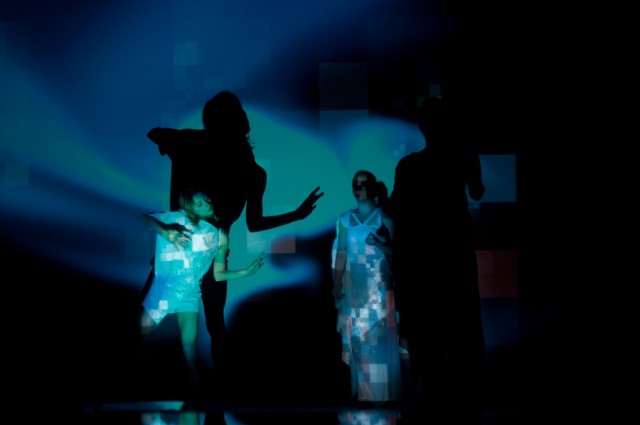 Tatsuru Arai: concept, composition, sound-graphic system(in Berlin)born in 1981/japan.
http://www.tatsuruarai.org/
https://vimeo.com/user24995607
lives and works in Berlin,Germany 2003-2009 Bachelor and Diplom studies in composition with Akira Nishimura,Toshio Hosokawa and Sunao Isaji at Tokyo college of Music.2007 in composition-class with Bernhard Lang at Implus in Graz.2009-2012 MA-studies Compostion, Computer-programming and Multimedia-art with Wolfgang Heiniger at the Academy of Music “hanns Eisler” Berlin.

Arístides Job García Hernández:
Born 1976 in Tenerife (Spain), currently living in Berlin working as a freelance graphic programmer and computer artist in the frame of generative-interactive design. In the last time, he has developed audiovisual sequencers, inspired on the abstraction “The Sound of the Geometry”, parametric design tools to produce paper artworks, and public interactive installations.
http://aristidesgarcia.tumblr.com/

Anna Anderegg: dance, choreography,dance
Anna ANDEREGG born in 1984 in Switzerland, the daughter of an opera singer and a nurse. She discovered dance at the Conservatory of Arts in Bern. Considering it a universals means of communication, she has made it her obsession and speaks this language in many countries while having the most exotic and improbable encounters. In 2011 the legendary director Klaus Lemke cast her in a leading role in the movie “Berlin für Helden”. In her own work she seeks the interaction of unlikely spaces and commonplace materials. She currently lives between Berlin / Biel and in 2013 her company, ASPHALT PILOTEN, won the national prize “Kultur- & Kreativpiloten Deutschland” and the “June Johnson” Swiss dance award.
http://asphaltpiloten.net/

Antoniya Ivanova was born and raised in Bulgaria. She studied Economics but driven by curiosity and the constant need for change she moved to San Francisco. There she studied Fashion Design at the Art Institute of California and was part of Missing Piece Art Collective focusing on custom wearable art. In 2008 Antoniya moved to Paris where she worked for an Haute Couture house. In 2011 she made Berlin the base of her creative explorations and now runs her own atelier where she works on costumes design projects and limited edition handmade collections.

Tatsuru Arai also shares a statement on what this is all about – and the new Renaissance:

My artistic approach falls within the category of “New-Renaissance Art” in which I am exploring how a Gesamtkunstwerk can coexist with recurrence/evolution, Human/Technology, organic/inorganic matter, Chaos/Order. Vitruvian uses real-time painting and a projection-mapping system; otherwise know as visualization. This performance features a singer and a dancer. The basis for the inspiration of my operetta Vitruvian is from the “Vitruvian man” of Leonardo da Vinci, where the piece attempts to make both an analysis and mapping of the human-body. The movements and vocalizations of the performers are mixed with different musical styles, which are composed and programmed with complex chaos systems/geometric forms/abstructuristic choreography and so forth. Beside this, the work is a combination of extremes and tries to induce the audience into an odyssey of perception.

Join us Friday in Berlin if you can; expect more documentation and investigation of this project afterward if you can’t.

And please, new and old, keep sending this sort of work in. We’re eager to cover it, as performance seems far outweighed by other forms of interactive design in online representation.

The Augmented Guitar: In Final Hours of Crowd-Funding, Watch What Guitar Wing Can Do