Axoloti makes any music hardware you can imagine

So, you’ve got your own special dream for a musical tool – the instrument or effect or sound machine you want. Traditionally, you’ve had a few options for realizing that – apart from going to the shops and hoping you can buy something that fits.

You could develop in software and run that on a computer (via Max/MSP, Reaktor, Pd, SuperCollider, and so on). You could patch together some hardware rig (as on a Eurorack, for instance). But what if a tiny board could be the computer and the hardware? That’s the third category in which the Axoloti, named for a “walking” salamander from Mexico, fits. And that’s appropriate: this is a small, rare beast that does more than you might expect.

The Axoloti has been around for a while, and I’ve been meaning to write it up. It was one of those things that was indeed so interesting that … I failed to come up with something to say about it. (Just like being really committed to starting a Pilates training program, sometimes the things you want to prioritize fall through the cracks.)

But that delay has an advantage: an impassioned Axoloti community has slowly built up around the board and demonstrated just why the thing could be so useful.

First, what is this little animal?

The project is the creation of one person, now with a community behind him – Johannes Taelman, of Belgium. He’s a really nice guy; I finally got to meet him yesterday. And he’s done an insane amount of work for any number of people, let alone one.

The hardware. The board itself is a custom circuit board at a surprisingly low 65€. You get:

The software. It’s when you add software to this that things become interesting. The hardware is paired with a graphical modular interface – one that immediately had people thinking of the beloved (but defunct) Nord Modular.

Fire up your Mac, Windows, or Linux machine, and you can work in a friendly modular environment. You get oscillators (from subtractive to FM), filters, modulation, and the like. Plus you can work with analog voltages and PWM outputs and MIDI from the board, plus stream audio files from its SD card.

Also, because it’s a graphical patch, it’s easy to share patches with others and make modifications – so you don’t necessarily have to build something from scratch, but you can modify things when you like. 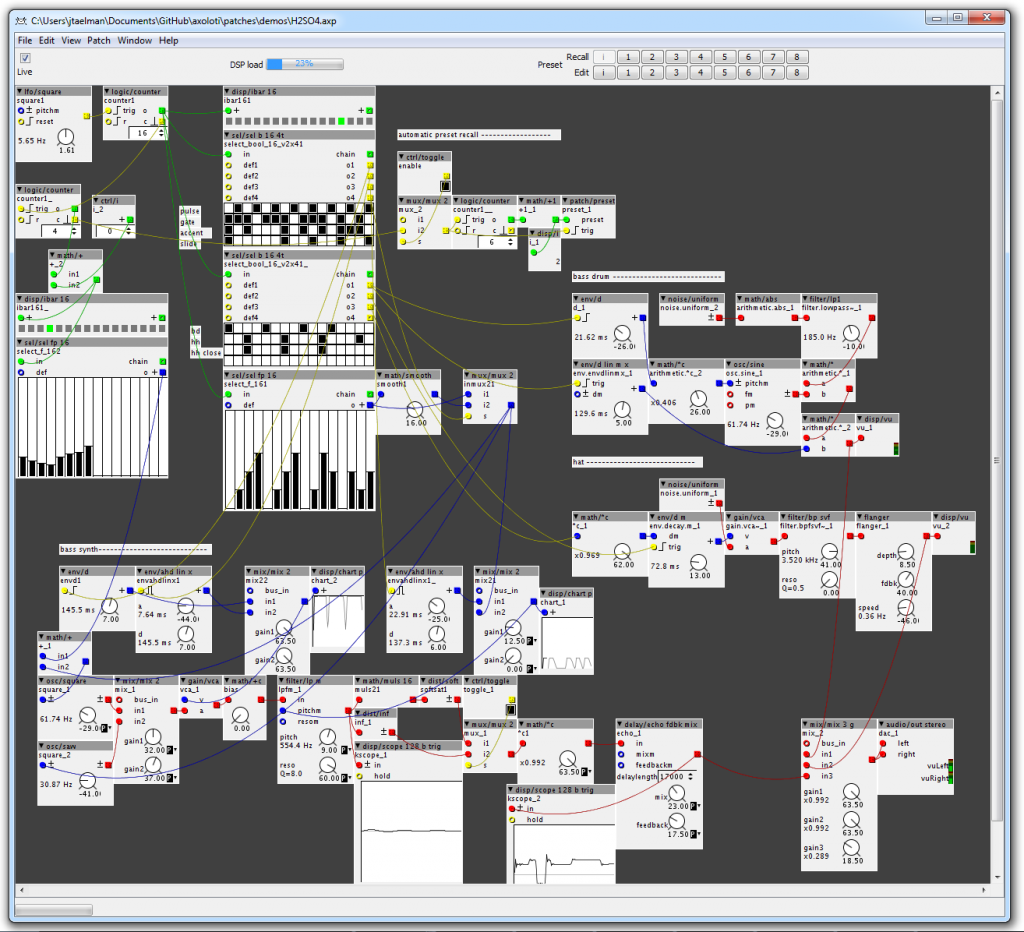 Axoloti isn’t the only way to do this — it just might be a better way. You could, of course, try to run software like Pd and SuperCollider on embedded boards. The problem is, that means contending with an operating system and configuration, for starters. Then, by the time you’re actually running the music tool you want, you may have to contend with unexpected performance issues in the embedded environment. (Pd, for instance, is efficient and designed for older machines, but not necessarily optimized on these platforms – so some stuff works, but not everything.) Now, most people can get at least that far, but then the real deal killer is typically that the hardware sold to mainstream electronics enthusiasts is pretty horrible for audio. There’s no usable audio (it’s not even good enough to listen to for testing in many cases), and if you do add USB devices, you may get poor performance. Not to rant, but seriously – this isn’t for the feint of heart, and the whole point is supposed to be working on music.

You could already use that as-is, but there are also 16 solder points for connecting pots, faders, and so on. (You might be familiar with using something like this on an Arduino, but here, everything is ready to go and it’s a real audio machine.)

Naturally, the other thing you might want to do is build an enclosure, as some in the community have. 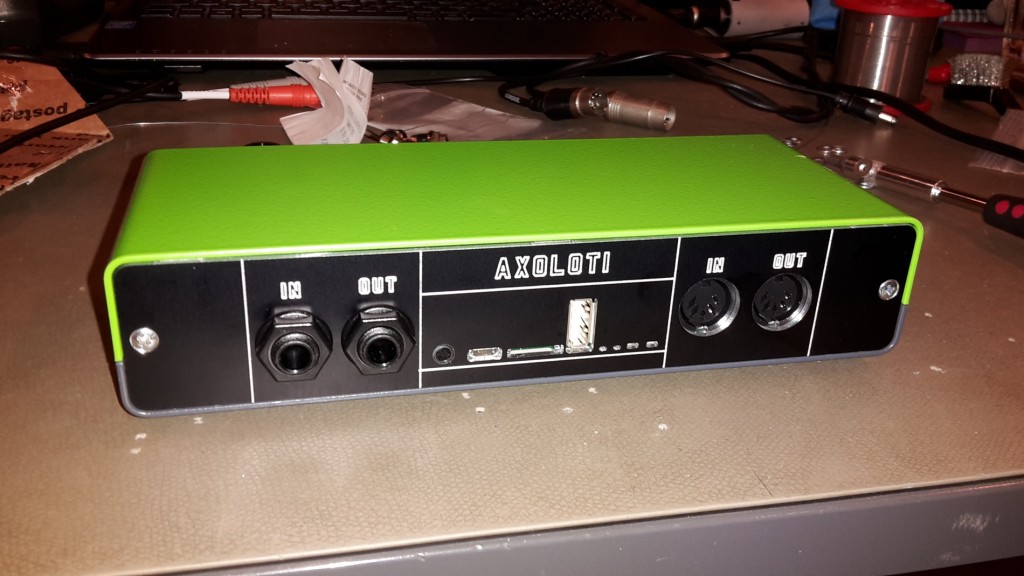 And look what’s possible. You can build a multi-effects pedal that has any number of effects, made in that modular system. And you can actually put it on the floor underneath your feet, which you probably don’t want to do with your MacBook Pro.

Or as Matthew Tyas did, you can get away from the desk and studio and into the woods. The Axoloti allowed a mobile DIY box that happily fits in a rucksack – and that means making some music out in nature in the sunshine.

Back in the studio, the digital nature of the Axoloti means that it can be an ideal computer stand-in, still flexible enough to produce strange new synthesizers and pair with controllers that send polyphonic expression data. True to the open source quality of the device, Mark Harris has added support for just that, and shows it off with a Madrona Labs Soundplane and an Eigenharp Alpha. (I’d like to give it a go with a ROLI Seaboard RISE, too.)

Because the Axoloti has built-in USB host, you don’t need a USB-MIDI converter, either.

Lest you think this is only about experimental noodling, though, here’s an acid bassline for you.

So, where do you get more information?

A work-in-progress book, independently made by Jan Vantomme

or the official site

I’ve just now gotten one to test, so hope to have a review and some tips soon. And I better think what I’ll do with it!

Hardware
The best Cyber Monday deals you can get now on synths, plug-ins, and more
Hardwaresynths
The very best Black Friday and Cyber Week deals on music and motion – a running list
synths
Cherry Audio added an ultra-rare Yamaha organ to their CS-80 – let’s still Doctor Who this s***
Hardware
Dnipro modular from Ukraine makes perfect modules – now with a deeper modulator