Now you can practice getting into Berghain in your browser

Well, it’s official: viral online jokes about Berghain, Berlin’s club venue, occur with the same frequency as its Klubnacht. But this deserves some mention, in that it says perhaps less about Berghain as it does about Berlin’s culture of obsessive-compulsive technologists. Because this throwaway joke about getting into the club is actually a pretty impressive interactive video game.

First, there’s a built-in cinematic, with the role of the bouncer played by one of the communication designer who helped build this. (Before you get snarky about this not being the “real” Sven, yes, this guy’s name is Sven, too.)

Then, there’s the trainer functionality. Facial recognition interprets your body language and expression – just to make sure you’re not having a good time. (What, you think you’re going to a party?) Two, speech recognition and language processing evaluates your answers. (Actually, I’ve no idea how it listens to the questions, but it at least got my ‘yes’ and ‘no’ correct.)

One of the things that marvels me about Berghain is that, while all around the world people are inviting their residents and copying cosmetic features of the experience (from black dress to Funktion One sound to even the beer and mate), no one has picked up on Berghain’s social media strategy, which is mostly to avoid social media and remove photos, mentions, and logos. That of course protects the privacy of partygoers (not to mention the ability to dance without having cell phones in your face), and it protects the brand. But the challenge of the 21st century is really now figuring out how to do promotion without doing promotion. There’s now so much quantity that adding quantity doesn’t help, so removing content is everything. And of course, this app is the latest example of how that can get people talking about you.

Someday, people will be teaching social media people how to learn from this ex… augh, that sounds terrible. I hope I don’t have to listen to that. But you know I’m probably still right.

Anyway, all of that is to say, Berghain forced the removal of the logo, and that’s worth mentioning because I adore the pixel-y version they made to replace it:

I like it more than the real logo. Someone get a warehouse and start an all 8-bit or less techno party, please.

And I will meanwhile contemplate the existential angst of this image: 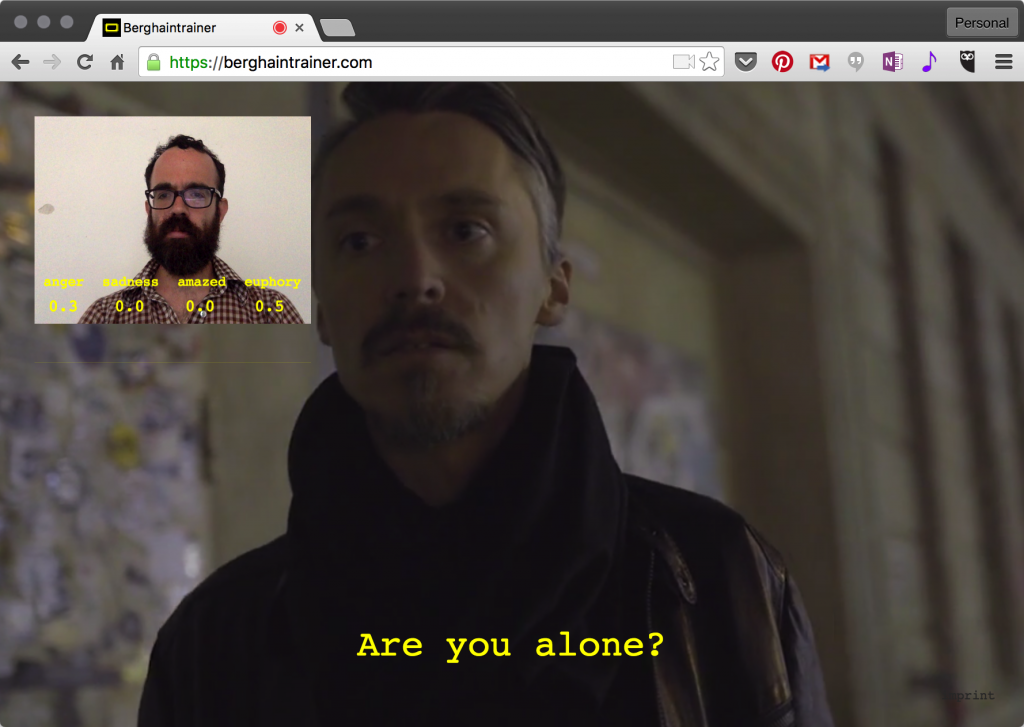 The creators: Fabian Burghardt and Vinzenz Aubry and don’t think I didn’t see you coding in a dark room. Mmm… JavaScript fetish.

Updated: been there, done that!

a hipster bar from Max Dovey on Vimeo.

A similar idea – without the Berghain narrative – is seen in the piece “A Hipster Bar” by Max Dovey from last year.

A hipster bar uses image recognition software to enforce a strict door policy that only admits people that look hipster enough. The doors for this bar will only open if you are at least 20% hipster, making it the world’s first automated hipster bar. The term hipster is used loosely to describe a sub-culture of people who attempt to keep up to date with the latest trend and remain ‘hip’. By sourcing thousands of images of hipsters (mainly from Instagram). Max Dovey, creator of the Hipster Bar has attempted to train an algorithm to recognize the visual characteristics of a hipster.

A photo series documents clubs after the party