“Electronic music needs to be wilder” was the challenge issues by Matt Black (NinjaTune, Coldcut) last year at Ableton Loop at a talk I moderated. But maybe this could be interpreted as “into the wild” in a difference sense. At the moment, I’m part of an ongoing series of residencies that takes that in a different direction – taking music performance (electronic, electro-acoustic, and acoustic) into unexpected natural environments.

Artist Antye Greie-Ripatti aka AGF has been for a few years an initiator of a rich and varied series of outdoor performance interventions, via residencies set deep into the northern hemisphere. That centers on the Finnish island of Hailuoto, where I am now with a group of electronic artist/inventors.

The notion of wilderness may be a somewhat romantic construct, but we can at least view it as an opposite to the insular bunkers in which electronic music was first incubated. Now, thanks to sophisticated mobile recording technology, battery-powered synthesizers, DIY electronics, and mobile sound computation, sound performance can happen anywhere.

It’s an interesting test of how to push live sound exploration to its limits – all the while with self-sufficient objects, no longer tethered to wall warts and power sockets. But whether or not weird experimental sounds are your cup of tea, it also provides some more general lessons. Being on batteries with portable instruments means the ability to go where you want. Paying attention to the environment means the chance to mine the world around you for inspiration – that might be as relevant to someone making a hip hop record as a weirdo (guilty as charged) sound art thing. 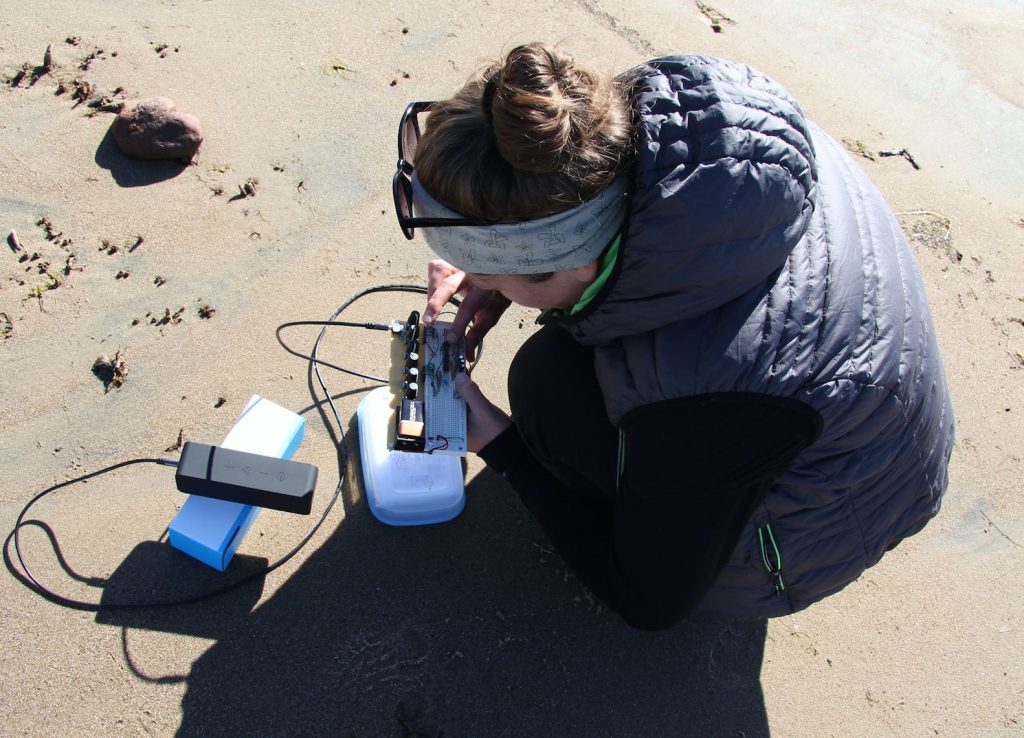 And most of all, this means the ability to stage a retreat from your usual environs. (That phenomenon has a storied history – I can’t count the number of classic songs that artists attributed over the years to gadgets like a Tascam Portastudio. Mobility is a great way to triumph over creative blocks.)

What I think is most critical about that retreat may not be the relationship to nature itself, as much as the chance for people to interact in that space.

For her part, AGF has a knack for facilitating radical art – whether with local kids or established adult artists. I expect we may have some documentation of our own work here on Hailuoto, but while I get back to the residency, here’s a taste of some of the past events.

From Field_Notes, an art-meets-science gathering in the Lapland/Finland hosted by the Finnish Society of Bioart, there are a number of provocative examples.

One group turned a remote reindeer fence into an instrument:

Samiland: We took off Kilpisjarvi to Čáhkáljávri walked for an hour and then found the reindeer fence and crossing (swedish: färist) which turned into an incredible instrument and then a rich-tourist-helicopter came and then we played for about 1.5 hours and time was lost and we became a band: Sonic Wild Code
This is research.
Context: Hybrid Matter – Field Notes: Sept 2015
fieldnotes.hybridmatters.net/groups/sonic-wild-code
Sonic Wild Code: Anja Erdmann, Till Bovermann, Kristina Lindström, Antye Greie-Ripatti, Caspar Ström, Vygandas Simbelis, Dinah Bird

Another performance takes to a cavern:

Lest you think this project must be exclusively about sparse experimental music, there’s already a movement by another group to spread it for techno – hashtag-ready, even, as #FieldTechno. (This is now even more practical with Ableton Link. Grab your MeeBlip and volcas and Novation Circuit and other low-power gadgets.)

Field Techno from Marine on Vimeo.

This next performance is in some way my favorite, though. On one level, not much happens – sonically or visually. But that itself takes on some sort of meditative quality, aided by the theatricality of the group tucked amongst the wall of rocks.

Antje excitedly tols us yesterday how a Sami reindeer herder, invited to watch, was enthralled (much to the artists’ surprise). He described the feeling of the piece, in a way that lent it a title: “Be without being but still exist.”

Place can take on political meaning, as well. A performance staged on a boat protested the siting of a proposed nuclear power plant – the artist herself a victim of Fukushima who collected stories from that event.

Sonic Boat Journey – documentary footage and recording of the boat performance feat. "Stones for Pyhäjoki" by Ryoko Akama – from Hai Art on Vimeo.

Sonic Boat Journey – “Stones- For Pyhäjoki” by Ryoko Akama (JP) ryokoakama.com/
The piece was recorded on site Hanhikivi Cape in the Bothnian Bay, where the nuclear power plant is planned.
Hai Art during Case Pyhäjoki invited the artist to share her experience as a Fukushima victim in the context of Pyhäjoki nuclear power plant plans.
‘Case Pyhäjoki – Artistic reflections on nuclear influence’ is a transdisciplinary artistic expedition, production workshop and presentation events in Pyhäjoki, North Ostrobothnia, Finland 1st to 11th of August 2013. The sixth nuclear power plant of Finland is planned to be built at Hanhikivi Cape in Pyhäjoki.
casepyhajoki.info/en
For the Sonic Boat Journey Ryoko Akama wrote a musical score for a 60km boat journey through the Bothnian Bay from Hailuoto to Pyhäjoki. She collected 8 stones, 2 from Fukushima, 2 from Marumori, 2 from Hailuoto and 2 from Pyhäjoki. The geographical text & time based score was transmitted via a handmade geiger counter and performed by AGF and Ryoko on the Bothnian Bay/ Finland.
We support Pro-Hanhikivi in their resistance against the project, especially after investigating all angles around the Fennovoima plans. facebook.com/prohanhikivi
FULL STORY: haiart.net/read.php?id=9846241
Produced by Hai Art: haiart.net

AGF is worth learning about on her own, too. Here’s an interview with her by way of introduction to her work:

BlokDust is an amazing graphical sound tool in your browser