Orphx are simply enchanting – doubly so live. Veteran experimentalists and master virtuosos of live performance, their music is heavy and industrial, but endlessly imaginative and groovy. Onstage, they genuinely improvise – there’s spontaneity and interplay.

And that creative energy plays out both in their imposing live schedule and in their prolific studio output. The duo, consisting of a clever matching of skills of Canada’s Rich Oddie and Christina Sealey, had a devastatingly good year in 2016. There was the masterful full-length Pitch Black Mirror. There were remixes and collaborations (like Eschaton, with Ancient Methods). And there were those face-melting live sets – I happened to catch them in a primetime slot at Berghain, which managed to rattle the jaded Berlin regulars and might easily have been the best live set I caught all year.

In fact, it’s hard to know how to even describe Orphx. Is it techno? Well, yes – especially as evidenced by the dancefloor reception. But it’s more experimental than the typical techno fare these days. It has strong roots in industrial, but not in an old-fashioned way, informed by post-punk flavors. It’s also sort of just Orphx – raw, driving, and fluid, in a way that’s all their own.

Definitely check out the full record, out on HANDS and [Adam X’s] Sonic Groove:
HANDS: Orphx
Pitch Black Mirror @ Bandcamp [vinyl’s sold out, but you can grab digital]

Here’s a hypnotic video to go with that:

It is significant that this is a duo: in a musical domain so focused on solo artists, their work is really about the combination of two different approaches and musical personalities. And so in talking to them, I focused on how they improvise, technically and musically, as I think it says a lot about how they invent their musical ideas.

Have a listen to a live set – couple of years old, but representative: 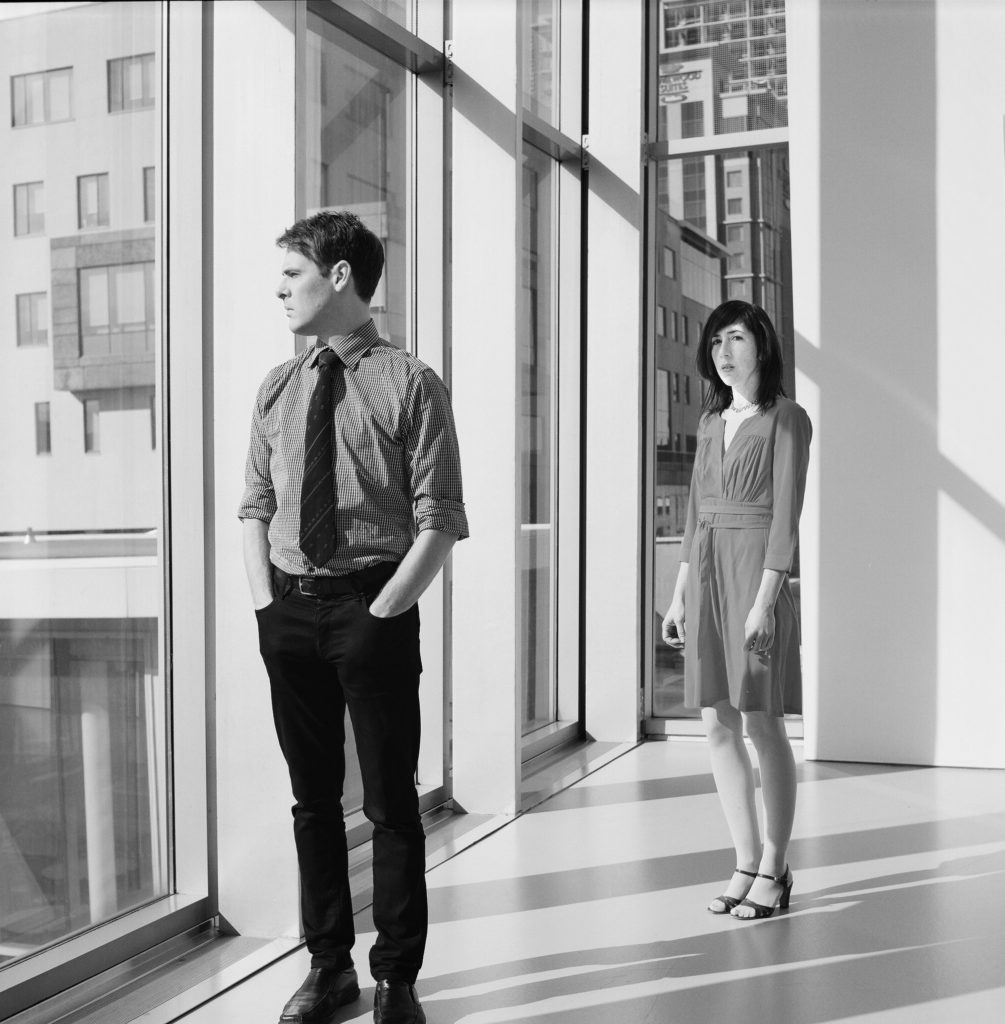 CDM: I want to start with the technique of how you play – but not just out of gear lust, but what it means for composition. So, for instance – each of you has some patterns that you trigger, and then improvise over top of that, right? How are those patterns composed?

Rich: Yes, all of our sets are improvised these days. I am using Ableton’s drum racks, loading them up with sounds from the studio and setting up it like two drum machines that I can improvise with. I am also using short clips of studio recordings that I can drop in to the mix, cut-up, and modulate. The APC40 controller and chains of plugin effects are central to my setup. Recently, I’ve been adding processed vocals to the mix and I’ll be integrating some additional hardware in the new year.

Christie: I send CV / gate time patterns to the modular from Ableton, using a program called [Expert Sleepers] Silent Way. I also use a Doepfer Dark Time sequencer that I can compose with on the fly. 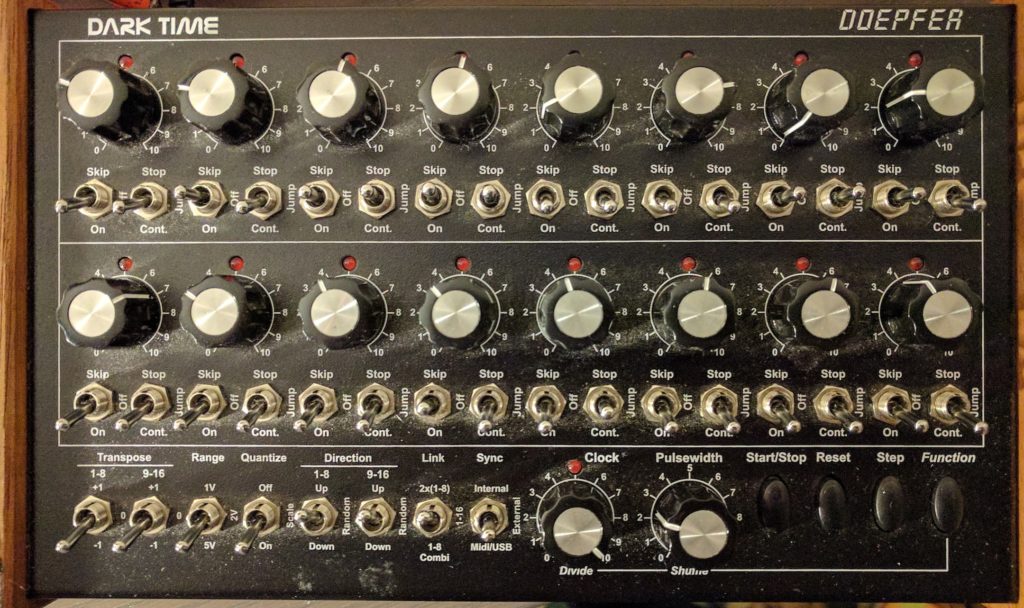 CDM: With two of you playing at once, how do you divide labor? What are you communicating up there?

Rich: I primarily focus on percussion, while Christie focuses more on bass lines, melodic patterns, and drones. But we both have a wide variety of sounds at our disposal and can bring in whatever elements we think are needed at that moment.

Christie: While we’re playing, we periodically discuss where we would like the music to go — stripping things down or building them up, or adding in a particular sound or pattern. Often, we don’t need to talk. Other times, we’ll give each other suggestions on the direction of where we want things to go next. 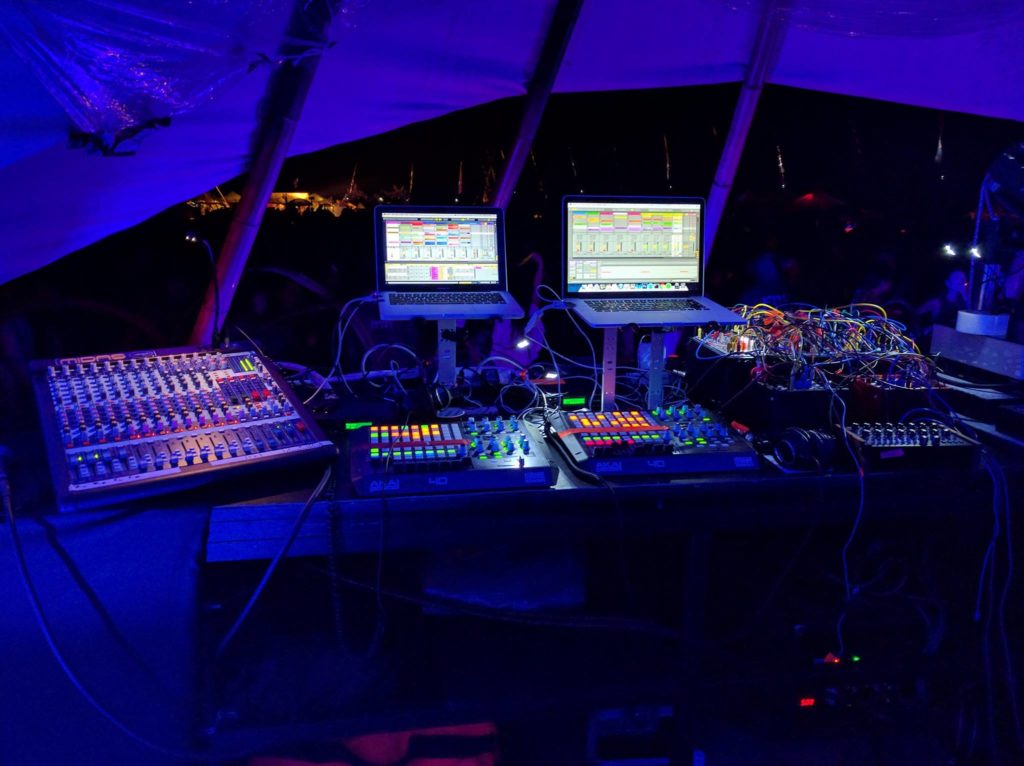 CDM: Christie, it seems you’re really focused on the modular, whereas Rich is running this APC40, though I know there’s a bit more to it than that. Where are your personalities in this music; how do you play differently?

Christie: Richard generally focuses on guiding the overall structure of the music, especially in terms of percussion, while I create modular patterns that shift and mutate over time. Because of the modular system, everything that we do is improvised. We both use an APC40 controller to mix and process our sounds. I also have a quad VCA on the modular that feeds back into Ableton, where I can add additional effects processing.

Rich: The modular setup requires a lot of careful control and preparation, but is ultimately a wild and unpredictable instrument. We both enjoy the element of danger that improvisation brings. I think Christie enjoys the element of having to really study and carefully prepare for each performance, and the task of trying to maintain control over the modular chaos. Whereas I tend to bring a bit more aggression to live performance and that comes through a more simplified focus on layering percussion, basslines, vocals, and effects. 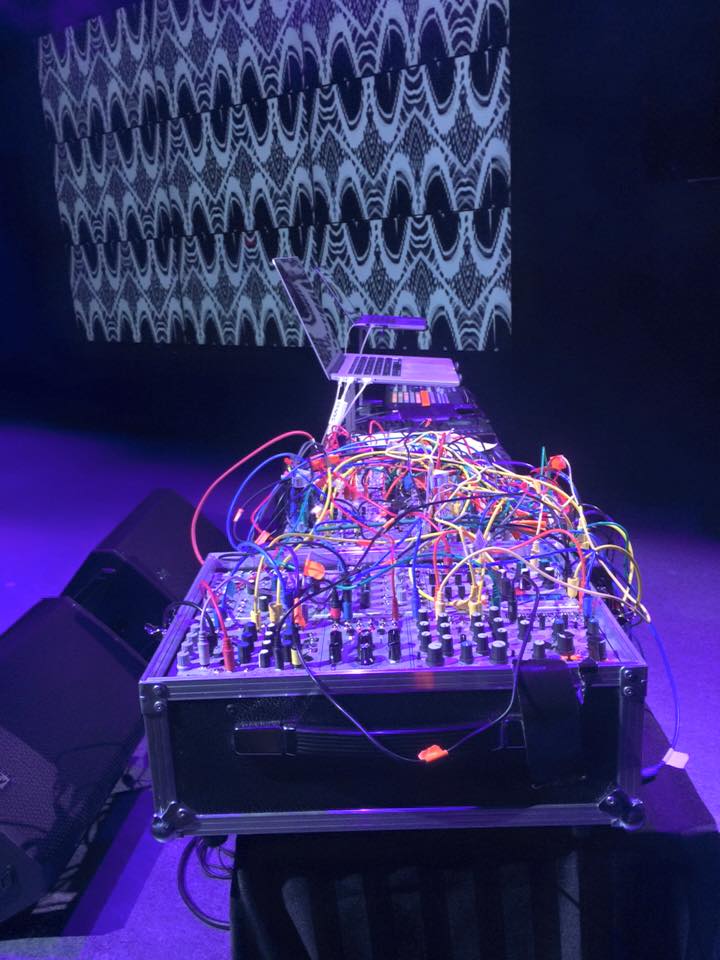 CDM: The modular plays some role in how time is organized. What modules are you using for time division? What sort of metric structure is that creating?

Christie: I send different types of clock divisions / gate times through four instances of Silent Way to multiples that I can then send to envelopes, LFOs, and to the clock of the Dark Time. Some envelopes and/or the Dark Time control sound length and timing through my 4MS VCA Matrix. Other envelopes control filters, glide, effects, etc. The combination of envelopes and LFOs mixed together creates continually changing patterns but these patterns need to work with what Rich is playing. For this reason, the master clock is controlled by his computer so that when he changes the tempo or timing all of my gates follow suit. 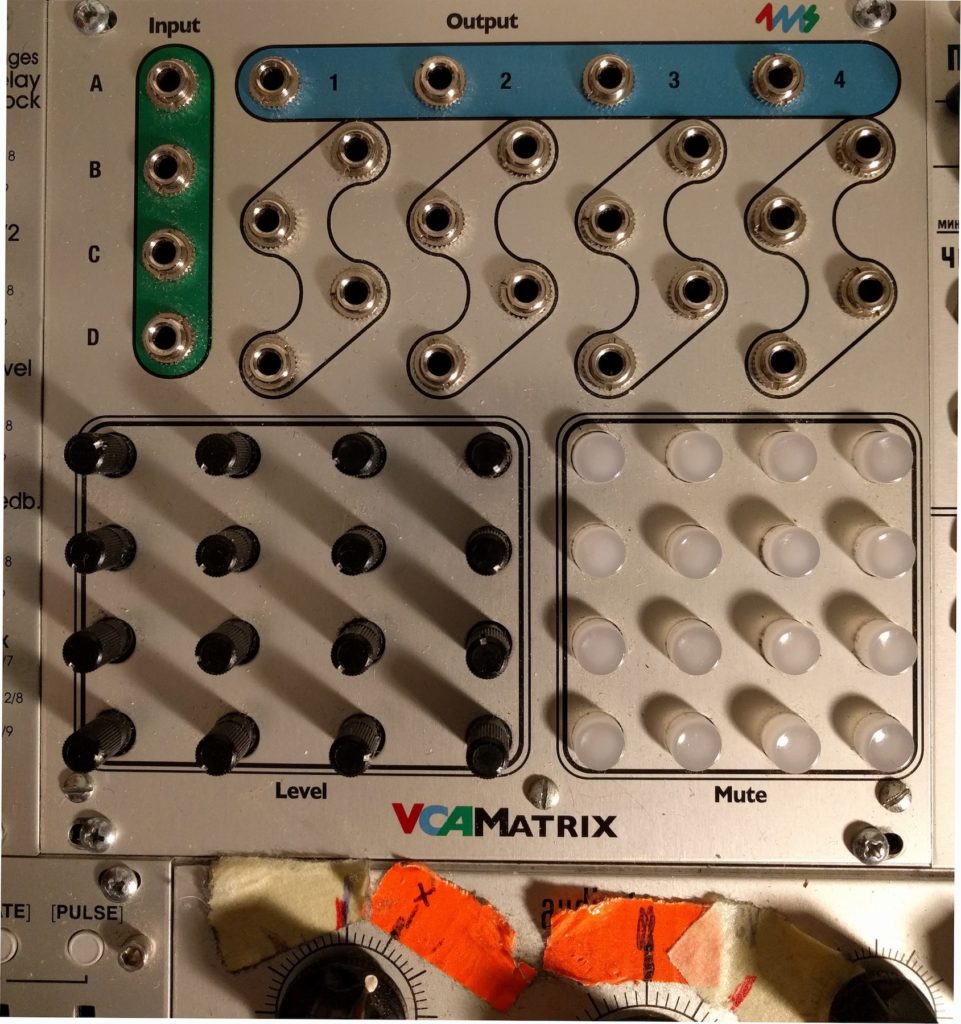 CDM: Actually, in general, I’m interested in this relationship between details of modular design and musical composition – we know that’s really important to the module builders. What are some of the modules that are important to you, and why?

Christie: Because I am creating sounds live with the modular and not processing previously recorded sounds, the modules that are most important in my live setup are those for sound creation: a number of different oscillators, lots of envelopes and LFOs, sequencers, filters, and multiples to create connections between sounds and patterns. Some of my favorite modules come from Make Noise, ModCan, and Wiard.

CDM: You’ve had a long history working with modular instruments. Where did you get started? What’s changed over the years?

Christie: I started work with modular instruments in 2008. When we first started making music in the early 90s, we had a lot of hands-on gear like synths, samplers, contact microphones, effects pedals, and reel-to-reel tape players.

By the 2000s, computer software became more powerful and we began using less hardware. I found the computer hard to connect with and was looking for new hands-on tools to use, specifically for live performance. A friend of mine was selling his Frac Rack modular system and I decided to buy it. [Ed.: Think the predecessor of Euro Rack here; PAiA Electronics laid the groundwork for Eurorack’s popularity by introducing a lot of the elements of the format Doepfer would use for Euro. Some people are still using Frac, especially as you can patch between that format and Euro. There’s even a little Facebook group. -PK] 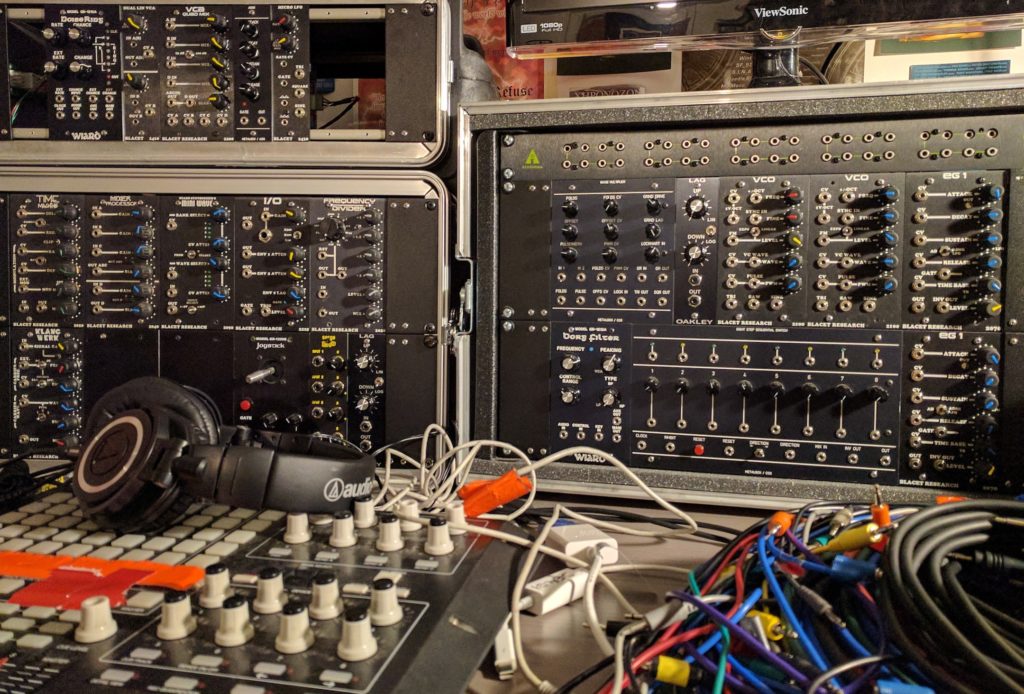 Frac Rack rig – a format that was a precursor to today’s Eurorack.

I quickly fell in love with the modular system because of the chance elements that came into play and the endless possibilities for sound creation. I used the Frac, which I still like the best, for a couple of tours but I eventually bought a Eurorack system to use for touring because it is smaller and so much easier to travel with. There are so many new people creating modules these days and pushing the boundaries so things are really exciting at the moment. Rich got into modular gear a couple of years ago and now also has a Euro rack system. So it is fun to be able to trade modules back and forth with him and other friends, and continually change the possibilities of the instrument.

CDM: Christie, you started a music program for young women with your friend Naomi Hocura, correct? What led you to do that? What are you teaching them, and how have they responded?

Christie: Naomi and I felt that women were under-represented in electronic music and we were interested in encouraging more women to become producers. We felt the best place to start was in providing a fun and safe learning environment for girls where they were exposed to female role-models and an inclusive electronic music history. Hamilton, Ontario-based musicians Jessy Lanza and Annie Shaw also joined us as instructors.

We taught a basic introduction to Ableton, analog and digital sound design, and sound processing and composition. Each class began with an electronic music history component.

The initial classes that we did focused on high-school aged girls, but subsequently we did classes for women that were also a lot of fun and we will be doing some classes in the new year that are open to everyone. Over the last few years, there seems to be a more women producing electronic music and increasingly better exposure, so that is really encouraging.

CDM: Tell us a bit about your concept for the new record. It feels like it also has this element of experimentation and improvisation in it, but how did you develop that into the album format? How did it become an arc?

Rich: The new album reflects a lot of what we have been experimenting with for live shows over the past few years. Improvisation was central to all of the tracks and most of them started as jams that we recorded while practicing for our live sets. We also drew on a wide range of influences for this record and we were consciously making connections back to earlier phases in our work, in terms of style and instrumentation.

CDM: What’s next for you? It feels like an impossibly tough moment for the North American scene in a lot of ways; is there a way to respond to that with music?

Rich: If you’re referring to the political situation in the United States, it is certainly a troubling time. And artists of all kinds have an opportunity to respond with more critical work. I don’t think that this is confined to North America, as we’re seeing a resurgence of far-right politics in many countries. We’ve always embedded political ideas in our work, through the use of titles, samples, and lyrics. On the most recent record, we’ve used location recordings from recent protest movements in Canada and the United States, and the themes of personal and political struggle are reflected in the lyrics and titles.

CDM: More sounds for you…

Here’s a psycho [strobe warning, if you have epilepsy] film for their brutal remix of Ontal, with visuals by the lo-fi maniacs at the29nov films: