Pioneer DJ are doing an analog monosynth with Dave Smith

First, a sampler. Now, a synth. Pioneer DJ, not content with essentially owning the DJ booth at this point, have their second production instrument in less than a year.

It’s called the Toraiz AS-1. It’s an analog monosynth. It continues the collaboration with synthesizer legend Dave Smith. 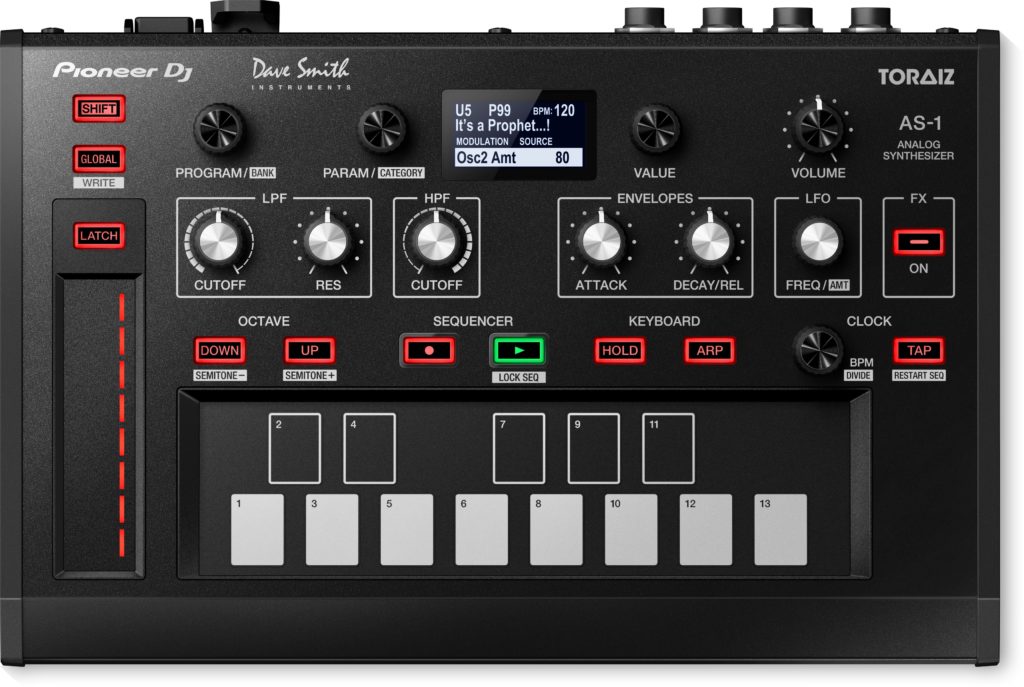 And it looks … well, like it was heavily influenced by the 303, and even Roland’s AIRA TB-03. Like the TB-03, there’s a touch pad at the bottom of the unit with 303-style key layout. Controls are really heavily simplified – there’s a vertical touch strip on the left, controls for the low-pass and high-pass filter, two knob envelope controls (hey, you know), and an LFO. You also get push-button access to transposition, effects, sequencer, and keyboard/arp controls. And, perhaps in a nod to the fact that Pioneer cater to DJs, there are prominent dedicated controls for tap tempo and bpm. (The “divide” option is also clever.)

But mainly it looks as though you’ll dial up presets, then play along on the touch controls and sequencer while adjust filter and envelopes.

So, what’s the sound about? It has the filters from Dave’s Prophet-6. And the architecture is fairly basic:

(Curiously, they describe the oscillators as analog, but only the filters as coming from Dave Smith – not sure if there’s a different oscillator design here. I’ll talk to Dave and co.)

Actually, if they had just done that, I think it’d be a total failure. But the smart move here was to add Dave Smith’s effects, too – again from the Prophet-6.

You can add one or two effects, choosing from:

Plus you get MIDI in and out, and – here’s Pioneer’s lock-in – Pioneer Link support. So you can plug it into a CDJ and sync to that.

That’s the part that to me is, frankly, unnerving. Pioneer can lock other synthesizer makers out of the DJ booth, and I don’t see how that’s terribly terrific for anyone.

But, on the other hand, by letting synthesizers into the DJ booth in the first place, Pioneer may unwittingly create some demand for sync interoperability with its gear. Let’s watch.

Make a basic two-oscillator synth, throw in some good Dave Smith filters and effects, and then make the thing easy to play and sequence – that sounds like a decent formula.

Now if you’re wondering whether producers other than die-hard Pioneer fans will give it a go – I’m wondering that, too. I’d like to give it a tough test from both the DJ and producer perspective. Hope we can convince Pioneer to get CDM a review unit in a hurry.

Hardware
Roger Linn shares hidden settings and more gems from the LinnStrument
Hardware
Faded Instruments has a line of candy-colored 1U tools – easy modular stocking stuffers
analog
The latest 1U tool is a DJ-style innofader crossfader from intellijel
Hardware
The best Cyber Monday deals you can get now on synths, plug-ins, and more