Roland today has announced a desktop monosynth that’s all-analog at US$/EUR 499. It’s got a bunch of nicely balanced sound features, plus a sequencer. And it represents a new collaboration for Roland, working with an actual boutique synth maker – Studio Electronics.

Roland has already called a cute set of synths “boutique,” but … it was unclear they knew what that word meant. (Like, small?) But Studio Electronics qualifies as genuinely boutique. Sure enough, Roland is adding this to a new line called the Boutique Designer Series. (Note the additional word “designer.”)

And that means a new direction for the industry, possibly – a small maker doing the design, but a big maker providing the scale (and thus lower cost). I think this could also lead to a bizarro universe where, now that big brands are doing analog at lower cost, boutique manufacturers may wind up embracing digital technology to continue to do things at smaller scale. That contrasts with the landscape from just a few years ago, when it was small makers embracing the analog tech bigger manufacturers had more or less abandoned. (Stay tuned and see if I’m right, or feel free to argue.)

Back to the SE-02, though, it looks great. Oh, yeah, and remember how a certain German manufacturer was going on forums crowing about how it was the only one providing low-cost synths to starving musicians? Uh… about that.

Let’s have a look: 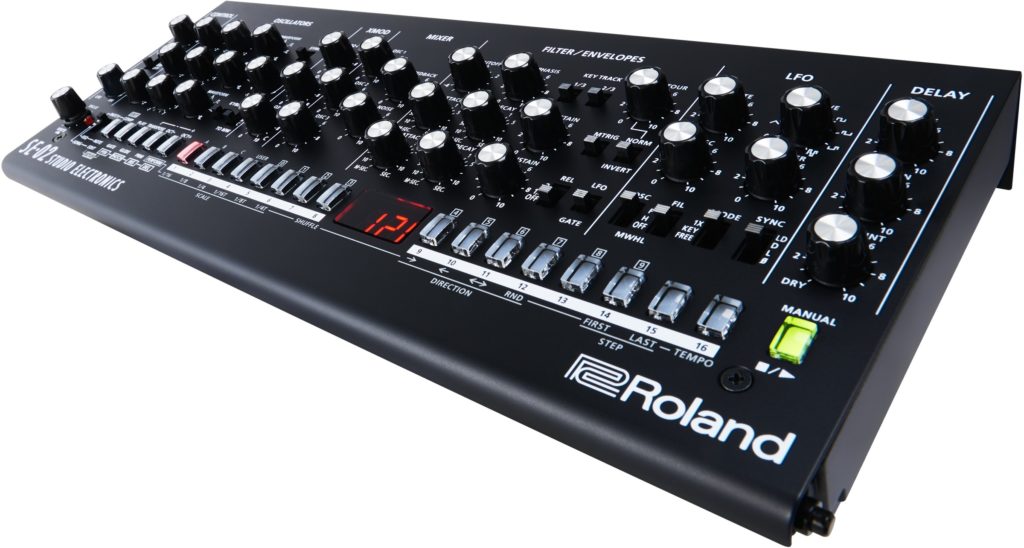 So, you get a lot of additional synthesis and sound design functions – which to me is more interesting than another Moog clone, even if this may have a three oscillator architecture and front panel layout obviously more than a little inspired by the Minimoog.

That’d really be enough, but in deference to today’s appetites, there’s also a step sequencer with per-step gate, per-step automation of any parameter on the front panel, and adjustable glide, plus sync via trigger, USB, or MIDI DIN. Also, while presets themselves may or may not be interesting to you (there are 384 of them if you do care), what’s really nice is the ability to store presets with the sequences – making this really appealing for live. (There’s ample user memory – 128 (Patch), 128 (Pattern), 16 (Song).)

Per-step control of every parameter is reason enough to have a look at this instrument.

You can also connect to modular rigs with trigger I/O and CV ins.

USB does both audio and MIDI.

Did I mention this is only five hundred bucks?

That puts the Roland head to head with Novation’s Circuit Mono Station, which has its own unique voice architecture and sound capabilities, and the advantage of an 8×4 grid controller (in place of the more conventional step sequencer here). They’re each totally new, totally unique in character, and take a very different approach from one another. I think that adds up to a real win for new designs.

We should have access to the new Roland by next week here in Berlin, so stay tuned for a hands-on.

In the meantime, Roland have done us the favor of posting a sound-only demo. And I love it – it sounds a bit raw and alive and very Studio Electronics. Still, it’s tough to judge by these videos alone; our hands-on will hopefully help. (Just don’t expect me to play live … there’s a step sequencer for a reason, I say. Sorry to my various piano teachers. 😉 )

Fantasy Mansion is an EP that’s also a generative, 8-bit circuit with sync