Dyktando aka Wiktor Milczarek is turning out dark, hard-hitting music and live sets that are brutally groovy. We got to join him in Sweden for our Conspiracy of Planets event – and to get a tour of his music, and the Polish scene.

Conspiracy of Planets was a debut event organized by myself with SONA [Pommes 94, Potent Pussy, GLUK] – her underground collectives (complete with a skate park) in Malmö Sweden getting mixed with Polish collective/label Brutaż, as represented by Wiktor. With the support of Inkonst, club and cultural center, we took over a Saturday night earlier this month.

And all of this meant the pleasure of, among other people, getting to know Wiktor, his unique approach to techno and live playing, and his perspective on the scene in Poland and beyond. Check out a hard-hitting live set from last year. (We’ll have his set from Sweden to share with you soon, too, hopefully.)

And his EP (under his real name) for the label:

Can you tell us a little about your relationship to Brutaz? How did you come to be involved in this collective?

So I was going to the Brutaż parties almost since the beginning. It was started by Piotr Kurek, Michał Libera, and Alessandro Facchini, in the club called Eufemia in the basement of the Art Academie in Warsaw. Then I’ve played once and together with Jacek (rrrkrta), starting to be much more involved in the party. Now I’ve released on Brutaż record label and I’m playing occasionally.

What’s the significance of that collective to you – has that shaped who you are musically?

Yeah, in a really big way. Not only because of what was happening at the parties, but also because we were talking a lot about records, artists, the way they were playing. We kind of have been discovering club music together. What was somehow unusual is the fact that most of us started with an experimental, noise, or modern classical music background and then went to techno, not the opposite.

Ed.: Well, yeah, I can relate to that bit! Maybe it’s the new thing.

Your sound I think is really powerful, really your own. How have you evolved to that point – or how is it continuing to change now?

I think I learned how to produce – and developed my sound – when I was doing my previous project called Souvenir de Tanger. I’ve also found my way of recording tracks, using a Tascam 644 cassette recorder. So almost all the music I make nowadays is just a one-take recording. That gives the opportunity to test ideas fast and also makes this punk-y sound. 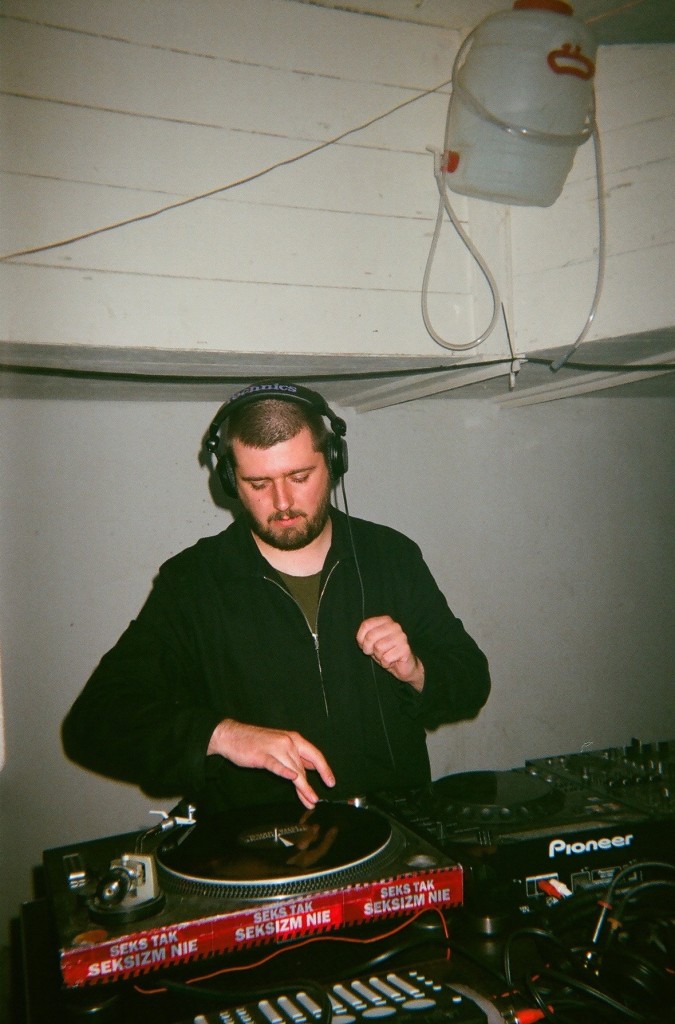 I really enjoyed your live set. What’s your onstage rig; what are you playing with?

I’m using a Cyclone TT-303, Dave Smith Instruments Mopho, Boss DR-660 and MFB 522. All of those things are put through various overdrives, delay, and pitch-shifting units. My main sequencer is an MPC 1000 that I’m also using for samples.

How much do you find you plan your sets ahead? Apart from practicing – do you have in mind a sense of what you’ll play? Have you parts pre-programmed?

I do have a prepared melodic structure of the set. I also have pre-made sequences of the different percussion parts (samples and DR-660) that I’m mixing one with another. With this, I’m improvising with MFB-522 and with the sound of Mopho.

You’d talked a bit about these elements from 80s Polish punk that you’re using – what’s the story there; how did you come to make use of those materials? What’s their significance to you?

My mother used to be involved in a Polish punk and post-punk scene in the 80’s. So I’ve been listening to this music since I was a child. She also has a lot of demo and bootleg tapes of really obscure bands, some of them I was sampling for this project. Some of those bands are really interesting, some of them not so, but the way how those tapes sound is really inspiring. Their sound quality is quite unique because of the sound equipment used to record them wasn’t the best and also tape degraded itself during the time.

One band to check out from Polish punk is WC – and yeah, Wiktor got some tapes from his Mom.

On some level, this seems like a split in electronic music – whether some of techno and experimental music continue to take on a punk aesthetic, right? Do you identify with that element in how play at all?

I think European techno has strong roots in punk and especially the post-punk scene. All those bands like Palais Schaumburg or A.G. Geige in Germany — also, the whole scene around Factory Records in the UK — were where many techno artists have started their music careers. So the binding is quite strong and it’s nice that some younger producers are trying to combine those two aesthetics. I find it kind of refreshing after those all years of chasing the perfect sound, that the opposite attitude starts to take over.

It’s also interesting to me to get to dig into Communist-era history of music, art, media, electronic arts … I find I’m doing this as an outsider, and have been personally inspired by what I’ve gotten to learn about Polish culture across these generations, but also that friends from the former eastern bloc are finding out more about one another’s histories, their own countries histories. This seems really different from a moment 20-25 years ago when it seems west and east were ready to just discard that past. Do you feel something has changed here? Are we somehow informing the new stuff we make partly by learning a bit more about what the generations before were doing?

I was born just after communism collapsed in Poland. So this is somehow an exotic past that is fascinating to explore. I think discarding the past is impossible – for many people, there’s still a need to align bills, making justice for people who were involved in the previous political system. (Basically, all of Polish politics you can describe with this conflict). I think what is quite unique for people of my age is the ability to making a less biased assessment of products of that era and rediscover them for our own cultural needs.

I know Polish society faces some real tension and challenge – well, as does my own American society, and it feels these are related. What’s the place of music for you in that sense? Is music something that can help you reach other people?

There is a big conflict in the Polish scene about how club music should be involved in politics. We in Brutaż are thinking that you can make some impact with music and parties. And because of a privileged position – in terms of cultural capital, the ability to reach many people – we should act. I don’t really believe in some magical power of music to change the world, but you can use it to build people’s awareness about political matters, or just to collect money to help people in need. It is, of course, working on a microscale, but it doesn’t mean that it’s not important.

Lastly, inside or outside Brutaż, who are other people from the scene around Warszawa or elsewhere you feel you relate to, that we should know?

Some of my favorite initiatives are:

Dunno. A great party and label run by Lutto Lento and Filip Lech, worth checking their last release of Aldona Orłowska. Polish pop-opera diva and a swimming champion)

Check out their podcasts archive.

And of course, don’t miss Dyktando / Wiktor / Brutaż – thanks for this opportunity to chat, and stay tuned for more!

Label of the month: Brutaż [Resident Advisor did a nice feature, by Elissa Stolman, in May]