Some musicians see Islamic mysticism; some the metaphysics of Einstein. But whether spiritual, theoretical, or both, even one John Coltrane pitch wheel is full of musical inspiration.

One thing’s certain – if you want your approach to pitch to be as high-tech and experimental as your instruments, Coltrane’s sketchbook could easily keep you busy for a lifetime.

Unpacking the entire music-theoretical achievements of John Coltrane could fill tomes – even this one picture has inspired a wide range of different interpretations. But let’s boil it down just to have a place to start. At its core, the Coltrane diagram is a circle of fifths – a way of representing the twelve tones of equal temperament in a continuous circle, commonly used in Western music theory (jazz, popular, and classical alike). And any jazz player has some basic grasp of this and uses it in everything from soloing to practice scales and progressions.

What makes Coltrane’s version interesting is the additional layers of annotation – both for what’s immediately revealing, and what’s potentially mysterious.

Sax player and blogger Roel Hollander pulled together a friendly analysis of what’s going on here. And while he himself is quick to point out he’s not an expert Coltrane scholar, he’s one a nice job of compiling some different interpretations.

See also Corey Mwamba’s analysis, upon which a lot of that story draws

Open Culture has commented a bit on the relations to metaphysics and the interpretation of various musicians, including vitally Yusef Lateef’s take:

John Coltrane Draws a Picture Illustrating the Mathematics of Music

Plus if you like this sort of thing, you owe it to yourself to find a copy of Yusef Lateef’s Repository of Scales and Melodic Patterns [Peter Spitzer blog review] – that’s related to what you (might) see here.

Take it with some grains of salt, since there doesn’t seem to be a clear story to why Coltrane even drew this, but there are some compelling details to this picture. The two-ring arrangement gives you two whole tone scales – one on C, and one on B – in such a way that you get intervals of fourths and fifths if you move diagonally between them. 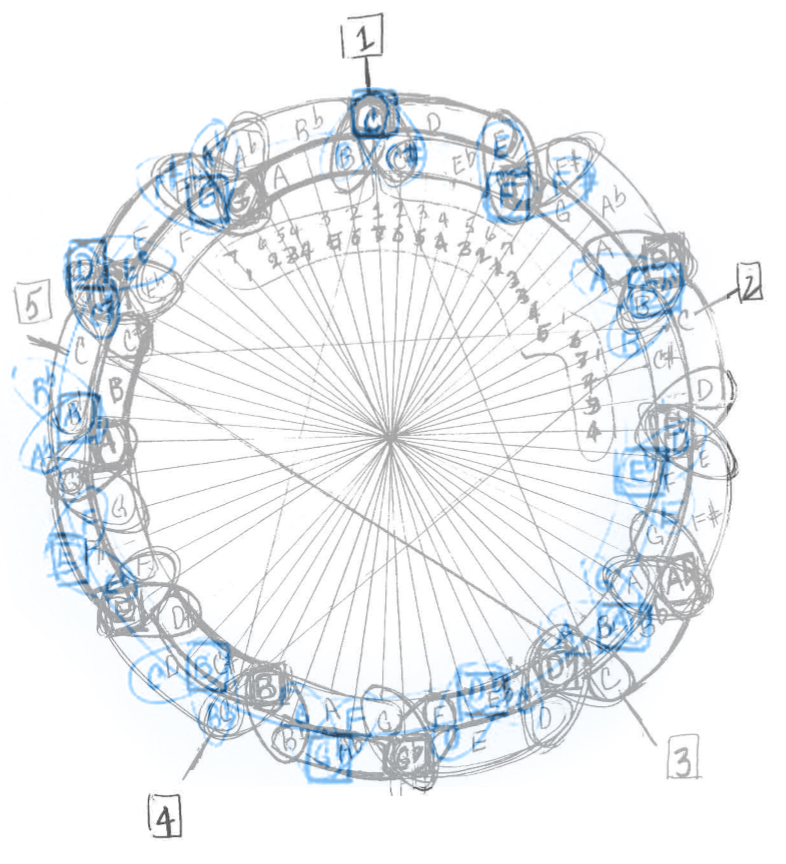 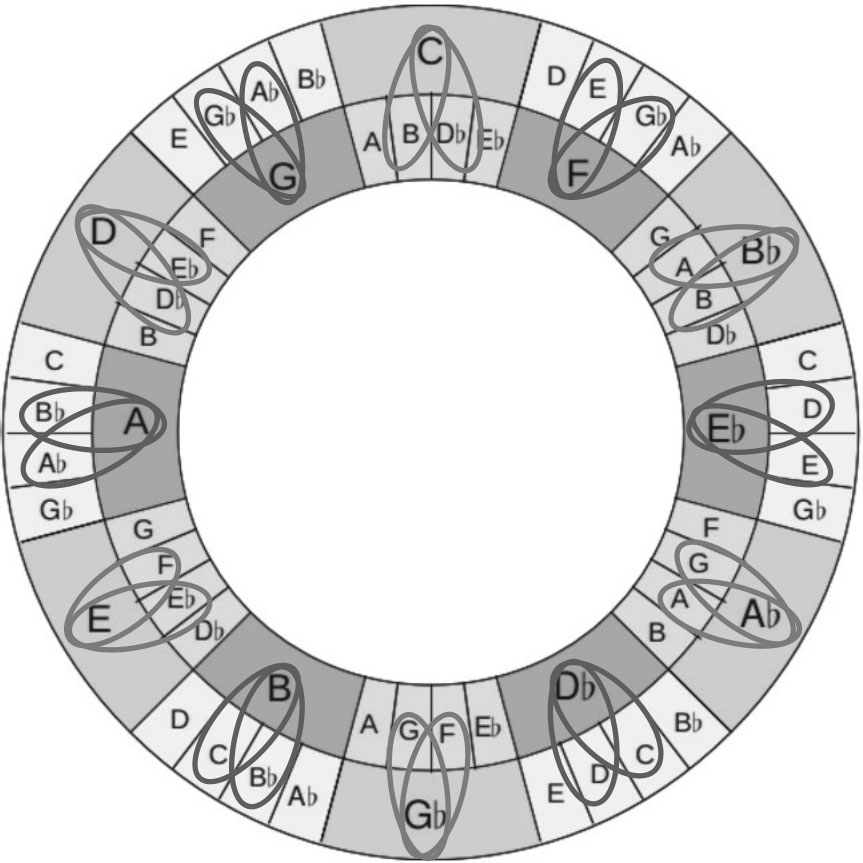 That’s already a useful way of visualizing relations of keys in a whole tone arrangement, which could have various applications for soloing or harmonies. Where this gets more esoteric is the circled bits, which highlight some particular chromaticism – connected further by a pentagram highlighting common tones.

Even reading that crudely, this can be a way of imagining diminished/double diminished melodic possibilities. Maybe the most suggestive take, though, is deriving North Indian-style modes from the circled pitches. Whether that was Coltrane’s intention or not, this isn’t a bad way of seeing those modal relationships.

You can also see some tritone substitutions and plenty of chromaticism and the all-interval tetrachord if you like. Really, what makes this fun is that like any such visualization, you can warp it to whatever you find useful – despite all the references to the nature of the universe, the essence of music is that you’re really free to make these decisions as the mood strikes you.

I’m not sure this will help you listen to Giant Steps or A Love Supreme with any new ears, but I am sure there are some ideas about music visualization or circular pitch layouts to try out. (Yeah, I might have to go sketch that on an iPad this week.)

(Can’t find a credit for this music video, but it’s an official one – more loosely interpretive and aesthetic than functional, released for Untitled Original 11383. Maybe someone knows more… UMG’s Verve imprint put out the previously unreleased

How might you extend what’s essentially a (very pretty) theory doodle to connecting Coltrane to General Relativity? Maybe it’s fairer to say that Coltrane’s approach to mentally freeing himself to find the inner meaning of the cosmos is connected, spiritually and creatively. Sax player and astrophysicist professor (nice combo) Stephon Alexander makes that cultural connection. I think it could be a template for imagining connections between music culture and physics, math, and cosmology.

and get ready to get lost there:

history
PsyTexx is a forgotten tracker for Palm PDAs – with features like distortion
history
Connecting MLK’s death to Hip Hop, and reading on Black identity and sound
history
Autechre dropped a 5.5 hour mix to celebrate the re-release of Artificial Intelligence compilation
history
Roland made an egg-shaped alien piano with flying drone speakers for its 50th anniversary