It’s not so much that anyone expected MySpace to be alive at this point, let alone a safe place for music uploads. The demise of years of MySpace music is more like a sad reminder of the direction of the Internet.

First, there’s actually a few events in the timeline of how so much music disappeared from the service in the first place.

Remember that about ten years ago it had only just been surpassed by Facebook. Since then, relative traffic, revenue, and headcount have plunged dramatically. The 2016 acquisition by Time Inc. was of a far weaker company, but even then ad revenue was seen as its value. Part of what Apple, Spotify, Facebook, and Google-owned YouTube have done, arguably, is weaken the overall market for ad revenue and premium services in music. That’s why it’s still worth watching SoundCloud’s creator-driven strategy, in contrast to the rest of the industry. 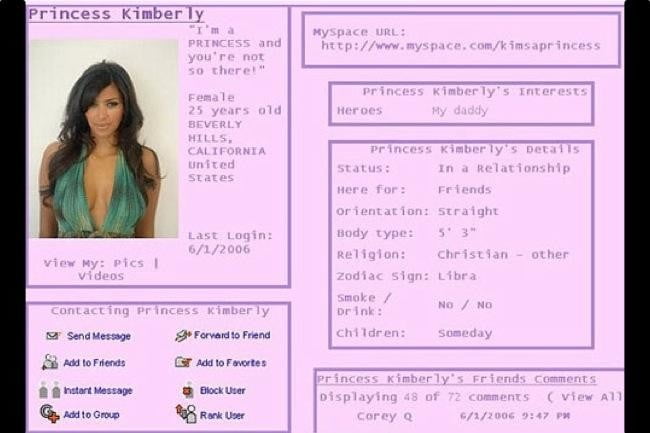 In the midst of the business meltdown, the circumstances of MySpace’s “loss” of years of much are highly suspicious.

Users on reddit have been the ones to chronicle what was going on at each step. Keep in mind, here they’re referring to their own user-uploaded content.

About one year ago, reddit users reported being unable to access a lot of previously available music, and got this cryptic response from MySpace:

There is an issue with all songs/videos uploaded over 3 years ago. We are aware of the issue and I have been informed the issue will be fixed, however, there is no exact time frame for when this will be completed. Until this is resolved the option to download is not available. I apologize for the inconvenience this may be causing.

Also from March of last year:

We’re in the process of doing a huge maintenance project for videos and songs. Due to this maintenance, you may notice some issues playing songs or videos. During this process, there may be possible downtime. We are actively working to ensure there is little to no issues with your listening experience. Please bear with us.

You may also notice missing artwork during this transition. We’re diligently working to get this resolved asap.

Please also note, all FLV videos can no longer be played due to an update to the player. We updated our player to HTML5. Unfortunately, we do not offer a way to play or download these videos.

Eight months ago, the player displayed this notice:

As a result of a server migration project, any photos, videos, and audio files you uploaded more than three years ago may no longer be available on or from Myspace. We apologize for the inconvenience and suggest that you retain your back up copies. If you would like more information, please contact our Data Protection Officer, Dr. Jana Jentzsch at DPO@myspace.com.

The timeline of news around the issue this week is actually incorrect, because it appears that all of this happened about a year ago. Seven months ago was when one redditer got a notice from the company saying files had been deleted. Yet only this week it seems mainstream sites (including this one, erm, okay mainstream sites plus this one) took notice. 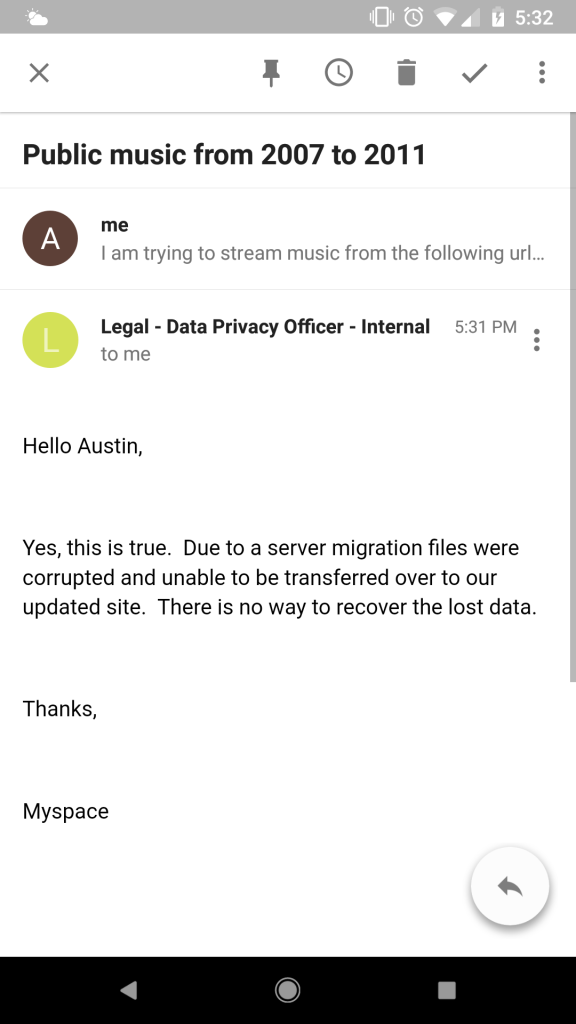 You’ll notice what happened there. Files disappeared without notice, then messages suggested that they might be somehow part of a migration, then suddenly they were “corrupted.”

By the way, Dr. Jentzsch apparently a third-party legal counsel in Germany, not MySpace management.

This paints a clear picture. It’s highly unlikely that this was an engineering error so much as the company poorly managing messaging about dropping old content entirely. That was the theory put forward on Twitter by Andy Baio, veteran of Kickstarter, waxy, upcoming.org, and others:

Myspace accidentally lost all the music uploaded from its first 12 years in a server migration, losing over 50 million songs from 14 million artists. https://t.co/OyKB5Dxtw9

I'm deeply skeptical this was an accident. Flagrant incompetence may be bad PR, but it still sounds better than "we can't be bothered with the effort and cost of migrating and hosting 50 million old MP3s."

In fact, the language used (“corrupted,” “server migration”) also appears not to be written by an engineer – in that an engineer would be more specific.

BBC and I are at least seven or eight months, maybe one year late on this, but yes, it’s on BBC:

But, okay, this part is obvious.

Equally obvious: you shouldn’t count on services to be the only copy of your stuff. These services generally have no obligation to keep things accessible.

Also equally obvious: a lot of us know that and do it anyway.

Obvious follow-up: we should go right now to places with our music, download it, and put it multiple places that are safe – both physically and online.

And we should be particularly mistrusting of big services this month, in which both Gmail and Facebook suffered major, multi=hours outages for which their enormously wealth corporate owners provided absolutely no explanation.

There’s a broader issue, though, beyond our own stuff. We need to begin to properly archive online content, and imagine how it will be more widely available – what we assumed the Internet would do in the first place. And there, folks like Jason Scott of the Internet Archive have been working on just that.

I hope there's some crazy phone calls and someone driving over to a storage unit full of hard drives over at MySpace right now pic.twitter.com/dmIY4fjtdJ

The Winamp Skins Collection at the @internetarchive is now past 62,000 skins, with the vast majority containing screenshots, AND, if you go to the page for them, they'll boot up a javascript version of the Winamp player in your browser, using that skin. https://t.co/fyN2A45doK pic.twitter.com/7sW2F6TU2c

But I think we need a complete reboot of what we’re doing with the Internet for music. I’ll be writing about that in coming weeks and trying to get your input (readers) and the input of other people involved in projects from the past, present, and future.

The situation right now is bleak – and the fact that people really were still looking to MySpace for their music demonstrates how bleak. Music uploaded to the “old Internet” may quickly be lost forever. Music now disappears into a black box of distribution services. Some of those distributors will actually remove music from streaming and download sites if the creators or publishers don’t pay up on a regular basis. And once on these sites, many artists will never see any amount of real, measurable income – whatever Spotify and Apple may be quarreling about currently.

In fact, I’d go as far as arguing that the focus on whether music makers get paid for their work ignores the fact that a lot of music makers feel they aren’t heard at all.

Which brings us back to MySpace. The early days of the Internet were full of music – even illegal music. It was the age of the netlabel. And then MySpace was the dominant social network from 2004 to 2010 – meaning that social media was dominated by music.

Obviously, that’s not the case now. Now we have “influencers” and selfies and literally Neo-Nazis and hate speech and fake news and almost everything but music.

If people are suddenly lamenting the loss of years-old data on MySpace, it could be because music online hasn’t grown as we hoped it would.

There’s still time to change that. We’re not getting any younger – and neither is the Web. So that time is now.

Here are some of the weirdest musical instrument ideas from NAMM

deton8 is a little drum machine with loads of soul