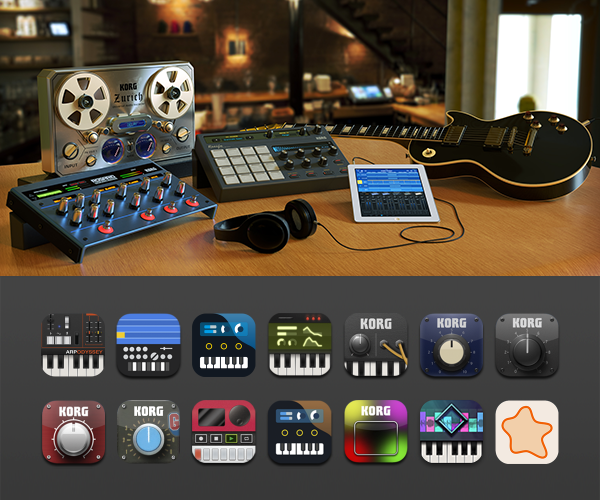 The Korg Summer Sale has begun. They’ve reduced the pricing on their iOS apps by up to 50% and the sale runs through to the 20th of August.

Korg only do this twice a year, so to a degree it’s a cause for some small celebration. Korg apps are not cheap by app store standards, in fact it’s only fair to say that they’re definitely on the premium side, so when they get up 50% off it’s worth taking a look. What’s more, Korg have put in app purchases on sale too. Here’s what’s on sale, app by app:

Korg Gadget for iOS
Gadget is without a doubt Korg’s flagship iOS, and also Mac app. The iOS version is reduced in price from $39.99 to $19.99. Some of the in app purchases for individual instruments seem to be on sale as well, again at 50% off. So, if you’re looking to complete or expand your set of these, now is a good time.

iWAVESTATION
One of Korg’s more recent apps and a recreation of their classic Wavestation. It’s on sale with 50% off down from $29.99 to $14.99. Also the additional cards in iWAVESTATION are also on sale with 40% off. So even if you have the app it’s worth taking a look.

ARP ODESSEi
Another of Korg’s more recent iOS apps, ARP ODESSEi is a recreation of the original ARP sound, “exquisitely reproduced in software” (Korg’s words not mine). Having said that it does sound good and also it’s a universal app, which is always good in my view.ARP ODYSSEi is on sale at $14.99 (usually $29.99) and additional cards are on sale in the app at 40% off.

Korg Module
Module has been around a while, but is one of the apps that I find very useful. If you’re interested in a handy sound library in iOS then this is worth checking out. The app itself is half price at $19.99 and the expansion libraries are also on sale at 50% off.

The iDS-10
In mobile terms Korg brought the DS-10 to Nintendo’s DS hardware. At the time that was something of a revelation. In late 2015 Korg brought it to iOS and it’s great. The iDS-10 is half price at $9.99.

Module Standard for iPhone
This is the cut down version of Module which is a bit cheaper than the full version. It is on sale as well at $14.99, usually $29.99.

iElectribe for iPhone
The original iElectribe was iPad only until Korg brought us a specifically designed version for the iPhone. The app is half price at $9.99.

The iM1
This is the M1 but in your iPad, and personally I find it immensely useful. My only complaint about it is that it isn’t a universal app. Having said that, I think it’s excellent, and it’s half price at $14.99.

iMS-20
This one of Korg’s first iOS productions and I still like it even though it hasn’t had a real update in a while now. It’s on sale at $14.99.

iPolysix
This is a really solid app and one that I feel is somewhat unsung. Sadly it hasn’t been updated for a while but it’s still worth investigating if you don’t know it. It’s on sale at $14.99

iElectribe for iPad
The original Korg iOS app. Still available and on sale at $9.99. Normal price $19.99.

iElectribe Gorillaz Edition
This was the special edition version. It’s ok, especially if you’re a fan. On sale at $9.99.

The iKaossilator
Korg’s representation of their Kaossilator hardware for iPad. Unfortunately it hasn’t had an update in a while but it is still fun to play around with. It’s on sale at $9.99.