Illustrator and director Dave McKean did the impossible to produce MirrorMask, his film collaboration with Neil Gaiman. He built his own animation studio, and did a lot of the work generating texture maps, designs, and even compositing on his own. I’d love to track down Mr. McKean myself on this, but in the meantime, there are some terrific stories at Apple.com in a feature by Barbara Gibson: 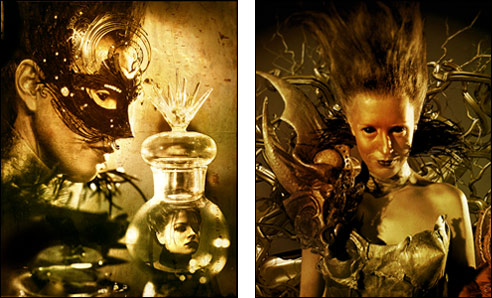 His tools of choice: Adobe Illustrator, Adobe Photoshop, and (for 3D) Alias Maya. It wasn’t all a dream: I’ve seen his advice to anyone thinking of doing their own compositing, and it’s basically don’t. But it’s spectacular what’s increasingly possible with a small team of artists, and the unique visual look of MirrorMask is a glimpse of the expanded artistic range that’s possible. It’s an antidote to the sameness of the big effects houses: make the tools democratic, and you have a real medium, as opposed to just a mass industry. You just might want to consider limiting yourself to still image design for CD covers if you want to see much of your family.

For more behind-the-scenes, MirrorMask is now available on DVD.