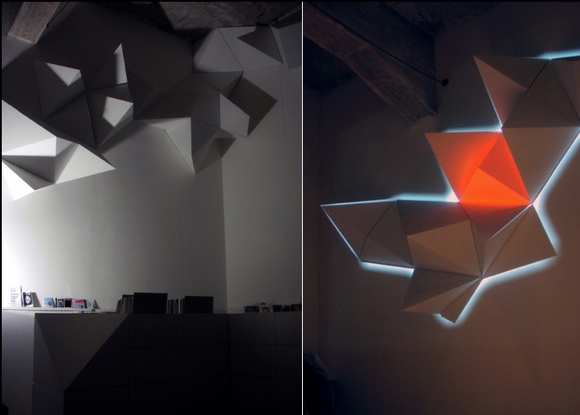 Tired of flat surfaces? Joanie Lemercier, known by the name antivj, was seen here recently with a terrific tutorial on Wii VJing. Now antivj is back with a terrific video performance, projecting onto 3D forms.

just did a new video, and I thought you might be interested as well: it’s a visual performance I did in January (for clubtransmediale festival in Berlin). The idea is to use regular projectors to project on 3D elements and volumes instead of screens. It’s called “visual mapping” (here on some sculptures done by visomat)

Visomat, Inc. did the polygonal forms, as Joanie added a second layer of “light sculpture.” It’s far more satisfying than just watching virtual polygons projected: the 3D forms are real. Video and lots of images at the project site:

I hope we’ll see this more regularly. Of course, that probably means some of us visualists not lucky enough to have a collaborator better learn some physical sculpting skills fast — and re-learn how to get projection onto surfaces!