Reflections on Being a VJ at Coachella: Mega VJ, VJ Gear Round-up

Ed.: Our guest superstar VJ Momo the Monster returns. Coachella isn’t necessarily a VJ convergence: VJs are aliens in a kingdom ruled by musicians. But with this crew, the gig rigs and artistry were flowing freely. Here’s just a glimpse of part of who and what was assembled. -PK

It’s now a week to the day since the start of the 2009 Coachella Festival, and I’m finally getting down to sorting notes, transferring pictures and video, trying to wrap the whole thing up in my head so I can file it away.

Doing visuals at Coachella was fun as hell, and also the craziest and most seat-of-my-pants show I’ve ever done. I was contacted by Brett Spivey of Xochi Media on March 31st (a little over two weeks before the event) and invited to join their crew. I joined them in Encinitas a week later for rehearsal and mind-melding, which is when I started my Coachella VJ Blog.

Our job was to be the House VJs – we would do visuals for anyone who didn’t already have something prepared. Spivey emailed all the performers to find out what they wanted, and the big guessing game began. Some groups got back to us right away, others didn’t respond until we were already setting up at the festival, and some never did. Of the groups that responded, some told us they wanted no visuals, some had a logo or an album cover, and others, like Groove Armada, provided us with Gigabytes of beautiful content we were to work from. 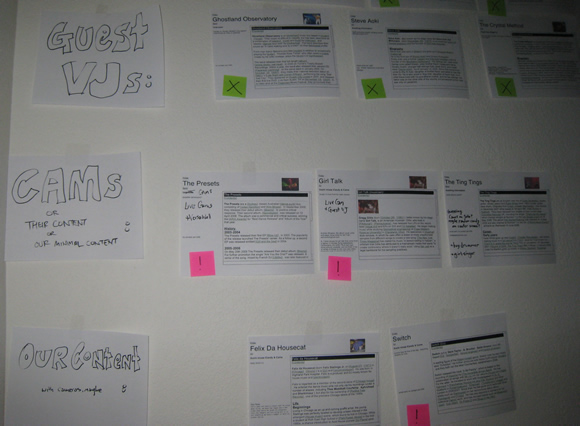 For many groups, we had to guess – Shepard Fairey was easy since he’s also a visual artist and has plenty of prints we can animate, but for someone like Christopher Lawrence, we just listened to the music and organized groups of clips to work from.

Oh, so much gear. From memory: 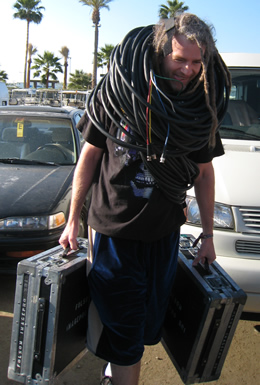 We had a great variety of VJs with us this year. Here’s what I’ve got from notes:

Tasso Okinawa did visuals for Gui Boratto on Friday and Supermayer on Sunday. He used a pair of MacBook Pros running VDMX.

Eye Pscience threw beam for Steve Aoki on Friday and MSTRKRFT on Saturday (with Xochi on live cameras for both). On deck were VJ Victorious, Lucky, Sid Z and Michael Allen. On their table I spied some Pioneer DVJ-X1s, an Edirol CG-8, a Korg Kaptivator, and Edirol V-4, a Korg Entrancer and a couple of MacBook Pros.

Andrew Strasser laid down the visuals for Girl Talk’s performance using a MacBook running Modul8. He definitely wins the award for most compact VJ setup. No controllers, no external drives, nothing but a consumer-grade laptop painted gold to match his outfit.

The Crystal Method had their own visuals, which I presume were run by a gregarious man with a charming accent named Laurence (or Lawrence, or possibly Lord Ence, I never saw it spelled out).

Thomas Traum did the visuals for M.A.N.D.Y. on behalf of Universal Everything.He used VDMX on a MacBook Pro, using TouchOSC on an iPhone for basic controls. All content was specially rendered 3d sequences created uniquely for M.A.N.D.Y.’s live set, which he mixed together on the fly.

A stylish fellow we know only as ‘Boris’ setup up with his MacBook Pro and some FaderFox boxes to run visuals for Perry Farrell.

Etienne De Crecy had their beautiful Exyzt Team-designed Cube. They were not interested in giving out information on their setup or having their picture taken.

Everyone Needs a Vocoder: Live 8 Video Tutorial, Plus Live Live and Dummy Clips

festivals
Ars Electronica, in scale from microcosm to epic, examines a planet on the edge
gear
Knot makes USB host pocket-sized, now on preorder
Korg
Korg drumlogue has it all: analog, samples, digital synth, SDK
gear
Synthstrom Deluge gets an OLED screen – and you can retrofit existing gear