The Wearable Screen: A Dress Made from LEDs, by CuteCircuit

Ah, clothes. You’re so warm, so good at preventing us from being naked and sunburnt. But you know what the passionate visualist really wants from clothes: we want a display.

The GalaxyDress is the latest creation of the fashionista-scientists of CuteCircuit, the smart-wearable design collective founded by Ivrea-trained designers Francesca Rosella and Ryan Genz. The design breakthrough, naturally, comes from the LEDs, which are tiny, thin, and most important for applying them to fashion, flat. The dress has also found its way into one of my all-time favorite museums.

The Galaxy Dress is the center piece of the "Fast Forward: Inventing the Future" exhibit at the Museum of Science and Industry in Chicago. The museum is celebrating its 75 years and has commissioned the GalaxyDress for their permanent collection.

The GalaxyDress provides a spectacular and mesmerizing effect being embroidered with 24000 color LEDs, it is the largest wearable display in the world. Constructed using the smallest full-color LEDs that are flat like paper and measuring only 2 by 2 mm.

Not that I’m entirely averse to wearing dresses (I did go to Sarah Lawrence), but now I think we need a GalaxySuit to go with this.

In all seriousness, I have no doubt that, just as visualists go beyond the screen with clever projection mapping, wearable technology and textiles will also prove a canvas for digital art and visuals.

CuteCircuit showed off more of what they’re working on in wearable tech on The Gadget Show (though you may need to dig through to find them). And you can catch a lot more work here:

This is of course not the only wearable display in existence (though it is higher-resolution than others I’ve seen). Via comments, Felix Turner points to the terrific LED suit worn by Bunny from the audiovisual band Rabbit in the Moon. His photo: 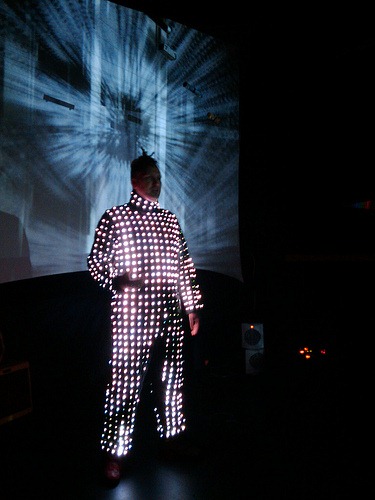