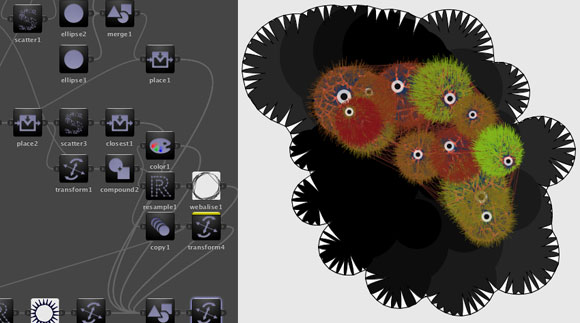 Free tools like Processing and OpenFrameworks have provided elegant, quick coding for live graphics, but their interfaces have tended to be code-based. One exception has been the Mac-based Field, which provides graphical patching. Now, you can add NodeBox to that list. This free graphical creation toolkit, built on Python, had long allowed tinkering with and exporting beautiful illustrations, but its interface used code exclusively – and it ran on Macs only. Now, NodeBox 2, in an actively-developed beta, runs on Windows and adds a graphical patching interface.

The “Core Vector” Nodes act as much as a set of macros as anything, with basic objects for shapes, grids, lines, curves, and text paths – a bit like what you’d find in the toolbox of a graphical editing package.

Windows support is a good thing for PC users, but the terrific Digital Tools blog asks an interesting question – is adding more necessarily a good thing?

… I am totally in love with this plain simplicity of NodeBox1. Having too much of everything, and getting results too quickly is not always for the best.

It’s a reasonable point. After all, an environment like Processing could easily enough add this sort of patching interface – but sometimes, focusing on code, and even adjusting code, then running the results, can be more productive. And by resisting such functionality, Processing remains lightweight and easier to support.

On the other hand, modular patching can be a powerful interface metaphor.

NodeBox remains one to watch. It’s still not suitable for live visuals, animation, and interaction as are other environments, but it could offer lessons for those tools. And it remains a fascinating way to produce illustrations and designs. 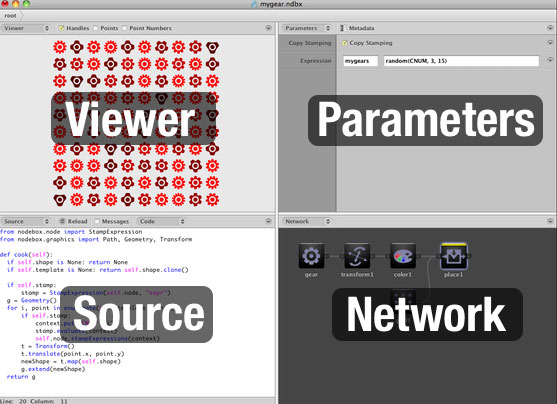 Tell Us Your Picks: Top Visualists, Best Work of 2009

Macpatching
EboSuite 2.0 hands-on: live video recording and more makes VJing feel native in Ableton Live
MacpatchingWindows
The best way to integrate Ableton Live and Eurorack modular – for any rig
patching
Dreadbox’s new 200€ Dysmetria kit is an insane amount of analog groove fun
Mac
May the 4th be with you, in a new documentary on the sounds of Skywalker