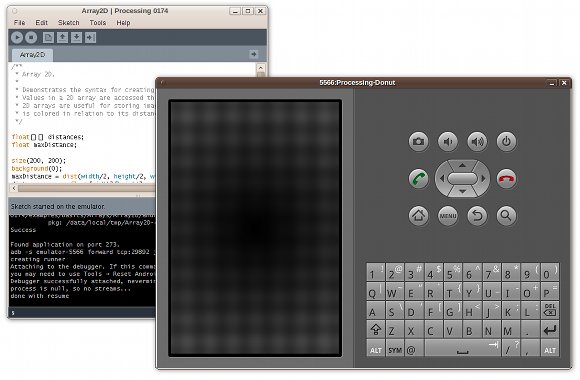 The remarkable thing about Processing on Android is that you can use your (desktop) sketchbook development environment as always, then run on the Google emulator or your device.

Google’s open-source Android mobile platform runs on Java. Processing, the elegant coding language for visualization, art, and media, is built in Java. The marriage of the two, therefore, is one we’ve long been anticipating. Processing’s ability to focus on lightweight, portable implementation is a perfect match for the demands of mobile development. For artists and visualists wanting to make handheld devices and tablets more expressive, I have good news: it’s coming. While not fully implemented or ready for widespread testing yet, Processing is in active development on the platform.

Ben Fry, co-creator of Processing, has been hard at work making Processing run on Android. Interestingly, in some ways Android itself vindicates the direction Processing charted years ago. Google made their platform work based on open-source development tools. They removed parts of the Java platform that would have overwhelmed the limited processing power of handhelds – even as a handful of purist Java developers cried foul. Graphics focuses on lightweight 2D and OpenGL drawing output, much in the same way that Processing strips Java to its bare essentials.

Best of all, doing Processing development for Android promises the same streamlined, sketchbook-like production flow that Processing does on desktop. To create Android apps, you simply set Processing to “Android mode.” (Right now, you have to point to Google’s SDK, but that happens only once and may be removed in future versions.) Hit run, and your sketch launches in the Emulator. Plug in an Android device via USB, and it’ll run on your device. Soon, you should have one-click-export of apps in the way that you do Processing desktop apps.

This also suggests some great possibilities for cheap, handheld devices, installations, and reliable portable devices for visual performance. Sure, right now a lot of Android-powered devices require a phone contract and don’t output video, but a lot of devices slated for later this year are media devices with video output and tablets, too.

Processing for Android is an early work-in-progress. If you’re thinking about playing with it and you don’t know what you’re doing, or you have little patience for bugs and wrinkles, you should wait until the waters grow safer. Right now, the team working on testing the port is intended to be limited, although as someone testing it myself, I can say it’s already a lot of fun and holds a lot of promise for the future. OpenGL support is currently not available, but it’s coming – and I’ll say again, if you want to know what Processing’s 3D future looks like, check out the superb GLGraphics library. Anyone who thinks Processing can’t be fast, or do intensive GPU work, or mix HD video (okay, not on Android, but on desktop at least), check out this library. OpenCL should also be possible soon.

BIG, BIG disclaimers! Please don’t go testing Processing on Android assuming it’ll work out of the box – for the brave ONLY, at least for now. (That should change very, very soon, but I couldn’t keep the news under my hat any longer.) As the disclaimer says (hilariously):

A number of us have already begun talking about the possibility of adding libraries to connect Processing’s capabilities to Google’s own APIs for the phone, SMS, sensors, and so on. Sound and synthesis via external libraries should also be possible.

I think Processing for Android is the perfect complement to openFrameworks for native code on mobile platforms. Right now, OF has already been used for terrific work on the iPhone. It’s not quite as user-friendly as Processing for Android for a number of reasons, but it has Processing-derived syntax, aesthetics, and philosophy, and it’s also free and open. For a superb guide to developing on the iPhone with OF, plus some links:

OF does not appear to be a practical solution for Android development, not least because Android requires apps to be distributed as Java, and uses Java to talk to all the native APIs. But it’s a good option for some of these other devices, and you can run the two alongside one another in Eclipse if you like, more advanced users.

With OF on the iPhone (and presumably other native platforms in future – Nokia N900, anyone?), and Processing for Android, plus tools like Pd and SuperCollider for synthesis (more on that soon), there’s no reason not to go completely open with portable interactive art on mobile devices.

mobile
PsyTexx is a forgotten tracker for Palm PDAs – with features like distortion
androidmobile
Inflation, begone: SunVox is still donationware, and 2.1 makes it slicker and more powerful
mobile
Lemur lives: iOS/Android app acquired by MIDI Kinetics
mobile
Teenage Engineering OP-1 field review, not a review: in the field, on an album