We got to once again enjoy the work of Beeple aka Mike Winkelmann this week with his Instrument Video Nine, featuring a new batch of 3D sound-making robots. The work landed him on the top of Vimeo, and rightfully so. Mike now shares some of his work flow

All the (wonderful, hand-rawn) pictures by Mike Winkelmann. The robots video at bottom.

What was the workflow like?
A lot of people ask what came first, the music or the video. They really sort of came out of a back and forth process. Sometimes, I’d first model something like a mechanical arm. And then I’d find a sound that kind of fit it. Then I’d sort of fit it into the music and finally animate it. Then I’d kind of go back and maybe tweak the sound or tweak the instrument as need. Other times I’d start with a sound that I really liked and figure out what I can model that might look like it makes that sound.
After the 3D animation was done, then I did post production work in After Effects which was new to me. Subprime was pretty much a straight render with very little even color correction. So learning how to do more of a proper post production was also a challenge.

How were the audio and video synced?
In terms of how the audio and video were synced, this was mostly the “brute force” way. When I first started out, I tried to use some of the built in tools in Cinema 4D to sync sound and animation, but found them to be a bit too simplified for what I was look for.. I am still too new to 3D animation to understand much of the scripting language in Cinema 4D which I no doubt could have used to automate this process. That combined with zero knowledge of MIDI really limited my options to just sort of buckling down and busting this motha out the only way I knew how… a whole lot of keyframes. 🙂 This was definitely quite tedious but because the timeline is so well laid out in Cinema 4D, it really wasn’t too bad.

What was your inspiration for the piece?
I really just wanted to make some sort of glitched out, futuristic, infographicy, 3D mechanical robot thing that was perfectly synced to music. I also wanted to it be much, much ‘darker’ than subprime. Early on in the making of it, I saw this video by New Judas that I absolutely fucking love. http://vimeo.com/764015 I also really like some of the infographic stuff that has been going around, obviously the Royksopp piece and the Feltron project http://feltron.com/. I wish I could have done a better job with that piece of it, but that was done towards the end of the project and by then I was pretty well spent on ‘er. 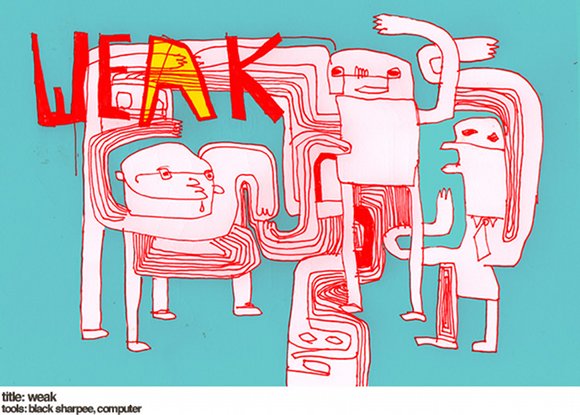 Did the “cult” success of your earlier pieces get you work which allowed you to put together more detailed projects?

My commercial work and my personal work are VERY seperate. My day job is a graphic designer for a very, very small IT firm, where I am the only designer. I do mostly web design for pretty reserved corporate sites that leaves very little room for too much creativity. Thus the need for my personal work where I can blow off a little steam 🙂 The videos I am doing now is the result of having more patience putting together more involved pieces and also actually having learned the tools needed to put together more involved pieces. But yeah, my personal work is my personal work, I’ve made very, very little money from it and I don’t see that changing anytime soon.

Jaymis Loveday contributed to this story.