The Entire Web Video Debate Summed up in Two Haikus, One Big Impasse 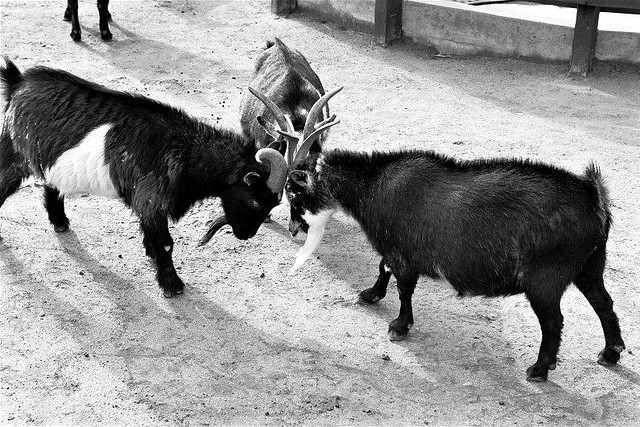 Just push a little harder, each of you, and I’m sure this will work out. Photo (CC-BY) Michael Fraley.

You could stop reading there, but by way of further explanation:

Have you noticed that debates over the future of Web video and the HTML5 tag seem to be unending? It’s because both sides are in an impasse, and both sides think it’s the other side’s fault. Both are right, in a way.

First, I want to thank readers for thoughtful, intense debate on this site. I think there’s an opportunity to reframe the discussion around actual content production and publication, and I hope that’s what we’ll do. Before moving to that, though, first is necessary to understand why everyone keeps banging heads, and that’s that there isn’t a solution that works for everyone.

Daring Fireball’s John Gruber, who has been the source I’ve seen quoted in blogs and mainstream press more than any other, has repeatedly declared that the choice of H.264 as the “practical” route, in contrast to the “idealistic” route. I think some of his points are actually well-reasoned and deserve to be answered, but he won’t stop needling some easy targets about them. He’s even resorted to name-calling, equating advocating free software with having a beard. Yeah, that’s right! F*** you, free software! You smell bad and have a neck beard! What have you done for us lately? (Okay, in fairness, I groaned when I got the FSF’s press release. It’s a bit like watching a Greenpeace Rainbow Warrior sail into the debate; even if they’re absolutely right, you know they’ll give PR ammunition to the other side.)

But “open video” advocacy, and I’ll include some of what I myself have written, hasn’t fared been much better. Just as H.264 advocates are arguing correctly for benefits of that format, open video advocates have easily-defensible points about the benefits of an open codec. But they simply can’t answer how that codec will become the standard delivery mechanism – not when you look at the big picture, from content creators to a wide variety of currently-fragmented devices.

In other words, I think advocates on both sides – that’s including me – are applying more wishful thinking to this discussion than logic. Let’s play out the two scenarios:

Why won’t everybody just play along and use WebM?

Non-starter, at least for now. WebM+VP8, as critics have rightfully pointed out, lacks a sufficient video production tool chain to be used by content producers without transcoding. Now, that much may change soon. Plug-ins for everything from QuickTime (and, by extension, iMovie and Final Cut) to free tools should provide easy output. And while you can’t find a camera that shoots VP8, a lot of editing requires transcoding, anyway. Browsers may “support H.264,” but not necessarily the whole spec. (Heck, half the cameras I’ve used that shoot H.264 usually find some way to screw it up that requires manual adjustment to their files.)

But that doesn’t matter; as with Theora before it, it’s the audience that counts, and that isn’t budging. Apple and Microsoft are unlikely to do native WebM+VP8 support any time soon. They will argue about VP8 what they argued about Theora: it could open them to patent liability, and it offers no significant benefit for them in terms of quality, compatibility, or usability – even if it weren’t a step backwards (which it probably is), it’s not a major step forwards, which is what would be necessary for them to adopt it.

The solution: plug-ins. There will be WebM browser plug-ins, but since Flash is rolling in support, Flash will remain the common denominator. That means Gruber has a point when he claims “In the name of “openness”, Opera, Mozilla, and now Chrome have chosen Flash.” That’s certainly not the intention of Opera, Mozilla, or Google, but it could be the upshot.

35% of readers of this site use Safari. 8% use IE. Loyal readers regularly read on iOS. Dropping support for these users is not an option.

So, there you go. Practicality. Logic. I mean, you’d practically need a neck beard to argue anything else. So…

Why won’t everybody just play along and use H.264?

Non-starter. There’s a reason H.264 in the video tag hasn’t already caught on: a critical mass of browsers doesn’t support it. Aside from people with “legacy” browser versions, it simply isn’t legally possible for open source browsers to incorporate H.264 decoding capabilities without running afoul of patent laws. This isn’t a murky issue, as it is with VP8: H.264 is based on a patent portfolio and license structure that is explicitly set out by the people who control the format.

In fact, for everyone who keeps claiming that H.264 is the video standard, you’re right. But what use is that standard for the Internet if half your readers get left out? (And yes, this is what I mean when I say Google did Firefox an enormous standard – they’ve removed the idea that Firefox stands alone better than Opera can.)

The solution: plug-ins. There will be H.264 browser plug-ins, but since Flash already has support, Flash is already the common denominator. “In the name of “openness”, Apple and Microsoft have chosen Flash.” That’s certainly not the intention of Apple or Microsoft, but it could be the upshot.

Wait a minute … did anyone else just get a strong sense of deja vu?

Both sides have a point. H.264 is a strong, mature format with excellent quality that has been ratified as a standard. But while it’s a standard, it’s not “open” in the definition many parties would consider – open standards in the context of the Web are generally assumed to be royalty free, and H.264 isn’t royalty free for either paid content or developers. WebM+VP8 isn’t a “standard” in that it hasn’t been ratified as such, but it is open and open source, which could result in new software innovation that would benefit creators.

Both sides require wishful thinking. So, what do you want – to give up Chrome and Firefox, or give up IE, Safari, and mobile Safari?

This is what a stalemate looks like. See haiku above.

So it’s your problem now. There are reasons to join Team H.264 or Team WebM. So, in the absence of a clear solution that works for everyone, I think the best thing that could happen would be for each side to work to prove their point to the other side.

Want H.264 everywhere on the Web? Then stop calling free software advocates bearded losers and start figuring out how they could adopt H.264 with the tools they want to use. (In a weird way, Microsoft did that by building an H.264 plug-in for Firefox, though it’s, naturally, Windows-only. Then again, that’s the way an engineer solves the problem, as opposed to a blogger – yep, me included. I’ll still go with the engineer.)

Want WebM everywhere on the Web? Then get to work. It’s especially easy there, as the tools are available free. I can see advantages to having open source decoders and containers, so I’ll look into what an actual workflow might be, and how anyone could get quality levels they don’t hate.

But, nice as it might have been just to have one format win out and not have to worry about it, that hasn’t happened and shows no signs of happening any time soon. So, unless you’re waiting for the Great Messiah of Video Codecs to come and solve this for you, I expect at this point the only way to make progress is to keep working on actually publishing videos, and try to find the best compromises for quality and compatibility you can. Or we could all go back to calling each other names. That’s more fun when you have food you can fling at each other. Us Webizens need to start meeting in a cafeteria.