In the realm of digital motion and pixel animation – albeit extremely low-resolution – here’s the clock for the open source lover, a hackable bedside clock that can be programmed to display custom animations. From random dots to Pac-Man cameos, it’s a clock that breaks from stock, coded by you instead of Sony. And there is a special charm to low-density matrices of lights in visuals, I find. (It’s not an alarm clock — yet — so a good place to begin hacking might be there.) 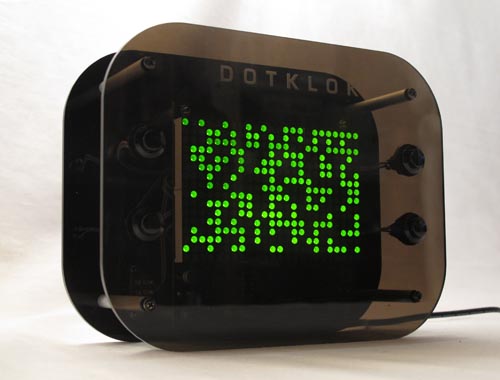 DOTKLOK is an open-source, hackable, Arduino-based digital clock that displays a series of unique time-telling animations. The passing of time is depicted with numbers and abstract/geometric patterns such as Morse code and minimal analog clock faces, and includes animations inspired by classic video games such as Pong, Tetris, Pacman, and Space Invaders. It was prototyped during my hacker residency at NYC Resistor during the summer of 2010.

If you’re thinking of working in hardware as a medium, there are a number of nice details here. It’s a good example, naturally, of using a clock – in this case, a real-time clock for accuracy. It’s also power-smart, using just two watts of power and shipping with a custom power adapter for universal compatibility with any socket anywhere in the world. More details on Andrew’s product site, plus of course open source details and how to order.

Find other hardware inspiring in the same vein? Let us know. (Andrew thought maybe this wasn’t relevant to this site, but I beg to differ – a screen’s a screen.)

Music Gaming Franchises Face Difficulties, But Here’s Why It’s Not Game Over Yet