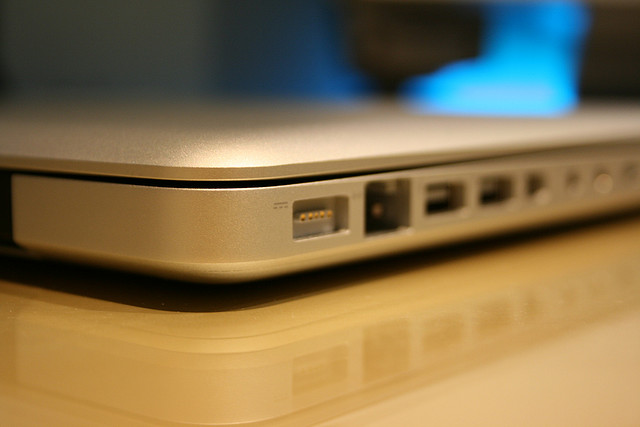 Let’s cut right to the chase on the “speed bump” revision of the MacBook Pro line today:

Now it’s our turn – I’d love to get a conversation going about what this means for live visual artists pushing laptops to the edge as far as performance.

I’m curious to hear from live visual developers. Obviously, yet again you have to shell out for the 15″ or 17″ – starting at US$1799 – to get the machine with a good price-performance ratio for doing any GPU work. That’s too bad, I think, as the 13″ form factor is terrific on the go, and it’d certainly be possible to do otherwise, as evidenced by the sub-$1000, compact Alienware M11. On the other hand, could the 13″ model still do what you need graphically? It’s on the edge, but possibly.

The Intel HD Graphics 3000 is an integrated Intel chip; notebookcheck.net compares it to an NVIDIA 310M, but it falls somewhere around 20% behind the previous-generation NVIDIA 320M. Video performance may be improved (I couldn’t find any numbers on that), and I don’t think the marginal loss on the Intel graphics chip can really take away from the larger performance gain on Sandy Bridge. It’d just be nice if Intel figured out a way to get more performance out of integrated architectures, as they keep promising they’ll do. I’m also unclear on what the Intel chip means for OpenCL; Intel has instead recently touted doing OpenCL calculation on the CPU, so we know where their heart lies.

LightPeak, now Thunderbolt, is a promising next-generation optical connection format. It could mean very, very, very fast storage. The magic number is 10 Gbps, or more than four times what we’ve gotten from even Express Card. That could definitely have video applications, not only for storage but other peripherals, which could be one reason Apple is out in front on this.

As for audio or other devices, it’s still a big question mark. And you’ll be waiting for supported accessories. On the other hand, Apple’s a good partner to drive that kind of adoption, because they do have so many speed-hungry pro users of storage.

But since we live in the present, not the future. In the present, you can expect improved performance thanks to a more modern chip architecture in these machines; in Apple’s tests, Sandy Bridge yields 2x performance gains. (Now, I usually take Apple’s benchmarks with a grain of salt. 2x is more than you’ll typically get, but previous PC tests do suggest some significant improvements in the 1.5x range.)

Testing Half Live 2 Episode 2 and Portal (hey, give them a break, the Mac just got Steam), Apple gets 2.8x to 3.1x performance gains in tests of the new AMD chip. You can get up to 1GB of dedicated video RAM, as well you should. And video memory is faster – GDDR5 RAM.

The chip is a Radeon 6490M (256M) on the entry-level 15″, but the 2.2G 15″ and 17″ models both get the beefier 6750M and 1GB of video memory. Notebookcheck doesn’t yet have benchmarks, but they do have specs These are not Mac-specific chips; they are PC chips, too. But they’re nice enough, and should provide some terrific OpenGL 4.1 and OpenCL performance and compatibility. By the way, on the video decode front, this is exactly the sort of chip that doesn’t support hardware VP8 decoding for Google’s WebM+VP8 format, only H.264. It’s not a deal-killer for that format, because of how powerful the GPU is, but it is an indication that Google has more work to do with the chip vendors, or at least that actual products remain in the pipeline.

So, in review, significantly faster architecture, no sacrifice as far as ExpressCard and FW800 versus the previous models, some significant future-proofing with that Thunderbolt port, and better GPUs with faster video RAM. You just still miss out on the GPU if you buy a 13″.

And yes, you could also still buy a PC, but I’m going to assume you can figure that out for yourself.

Now, I wrote this rambling article in part because I’d like to hear from you. If you’re a developer/artist pushing these machines to the breaking point, let us know what you think about the GPUs and revised architecture of these machines. And PC owners, what for you has been the sweet spot on that side, particularly since on that side you do have choices for greater customization?