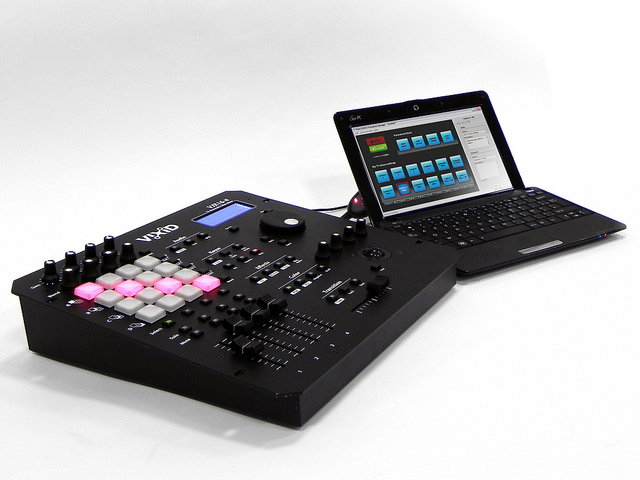 Vixid, boutique makers of the VJX hardware mixer line, have announced unexpectedly that they are closing all operations. This comes as a surprise to those of us who talked to them earlier this year about plans to release new hardware – a story seen here as recently as September. From their site:

Today, the VIXIDSARL’s venture is coming to an end. We are keen on saying goodbye to you, but above all thanking you.

Started in 2005, our project was based a simple idea: shaking up the traditional audiovisual tools and bringing truly innovative solutions to meet the needs of the new audiovisual practices. Right from the start, some people supported us unconditionally, while many others considered that the project was unrealizable. Designing, developing and industrializing a video mixer in France sounded unfeasible. Nevertheless, we made it: in 2008, the VJX16-4 video mixer saw the light of day. Since then, it travelled around the world with international artists and users in more than 30 countries.

We have always stayed true to our values and our commitments of quality, innovation and dialogue with our users. One of our greatest successes is our satisfaction. We also marveled many times at the way our products were used, whether in the hands of VJs, theater and dance companies or for public or private events.

Sadly, after all these years, we have to bow out. We want to thank you for your support, your encouragements and your friendship during these years. It was a wonderful technological and human adventure.
We hope to have the pleasure to meet you at the entrance of a theatre, in a concert hall or anywhere else.

PS: the vixid’s website will be shut down in the next weeks, so we invite you to download as soon as possible the user manual, tutorial videos and anything that could be useful.

This is the end for a great adventure. The news is now official, VIXID SARL just closed. Thank you all for the years of sharing around visual arts with nice and beautiful projects. We are proud of what we did. A video mixer designed, developed and industrialized in France with real ethics and willingness to innovate in a business where the tools were often too conventional. A page turns. I hope to see you in the next chapter. Hats off to all the artists and technicians who have trusted our brand and helped us. My friendships.

CDM has a unique history with Vixid, in that former contributor Jaymis Loveday built a whole project around testing their mixer. We were also one of the first to cover the product in depth. That site we hosted is still available (and we intend to keep it so); it was later turned over contributions to Vince from the Vixid team, who added some useful stories:
http://vixid.noisepages.com/

Vixid’s VJ-friendly hardware also holds a special place in live visual history. It’s a bit unusual to see even the website shutter – typically, even companies shutting down keep support documentation alive, at least for a while. Of course, if you need somewhere to host them…

As Vixid closes its doors, though, I hope this isn’t the history of original hardware by visualists, for visualists. The best parts of their design and the stories of the artists who used the product will, hopefully, inspire new products to come.