Cubepix, Kinetic Projection Mapping On A Moving Wall of Cubes [Arduino + OF + Kinect]

The next step in projection mapping: kinetic projection mapping. Moving beyond the sometimes-clinical use of projection mapping to use three-dimensional objects as a surface, the addition of the kinetic makes the surface itself part of the motion. Cubepix is a direct, lovely implementation of that notion, as an array of cubes moves in concert with the images displayed on them.

This project also clearly recalls the work of Daniel Rozin, whose wooden mirrors – one most notoriously displayed in the entrance lobby of NYU’s ITP media tech program – similarly make physical movement part of the display. These are screens that, like yesterday’s IR remote controls, are not merely empty virtual canvases. The display itself is partly physical sculpture, an active element in what you see rather than passive.

Cubepix is the work of Glassworks; that creative house is located in London, Amsterdam, and Barcelona; the Spanish team worked on this. 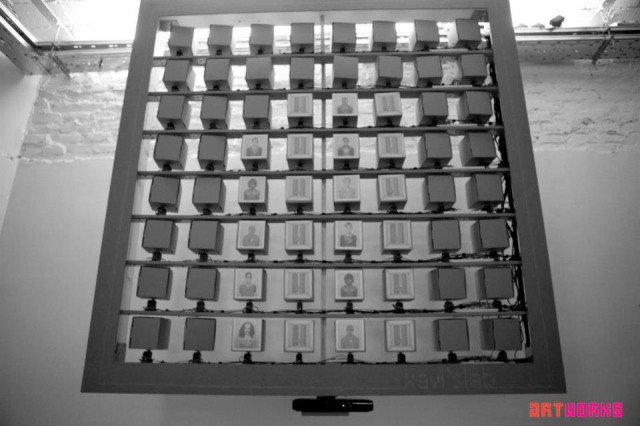 Xavi’s Lab, the Special Projects division of Glassworks Barcelona, have created some pretty cool stuff but this time they have surpassed themselves.

We are very proud to present Cubepix, a fully interactive and real-time 4D projection mapping package. It has been conceived and developed entirely by our resident Spanish tech-genius Xavi Tribo, always at the forefront of emerging technologies and wizardry.

Shown here in prototype form, it has been devised using a secret recipe of Xavi’s, combining a projector, a Microsoft Kinect, 8 Arduino boards, 64 servo motors, 64 cardboard boxes and bucket-loads of brainpower.

Using all of the above, users are able to interact and influence the way the boxes move and are illuminated. Not only that, the software knows how and when the boxes are going to turn and projects onto them accordingly. The results are stunning and great fun.

The film below is just (we say just, it’s pretty damn cool) Xavi’s prototype but its potential for use in interactive and experiential advertising is really exciting. Glassworks always strives to be at the forefront of new and exciting ways these cutting-edge technologies (in this instance, conceived by Glassworks) can further and excite the industry we work in.
Made with openframeworks.

From Open University, here’s an excellent look at Danny Rozin’s mirror. What’s compelling about Rozin’s design is that it conveys the effect of a screen without the use of projected imagery, though the combination of the two – and other kinetic designs – opens up many other possibilities:

It’s a slightly different design, but his “Weave Mirror” is a personal favorite:

“Weave Mirror” (2007) by Daniel Rozin from bitforms gallery on Vimeo.

“Weave Mirror”, 2007
768 laminated C-ring prints, motors, circuits, custom software, microcontroller
57 x 76 x 8” / 148 x 193 x 20 cm
edition of 6
Rozin’s “Weave Mirror” assembles 768 motorized and laminated C-shaped prints along the surface of a picture plane that texturally mimics a homespun basket. A seemingly organic smoky portrait comes in focus to the sound of clacking steps made by the sculpture’s moving parts. Informed by traditions of both textile design and new media, the “Weave Mirror” paints a picture of viewers using a gradual rotation in greyscale value on each C-ring. A playful juxtaposition between the rustic and photographic, this sculpture is suspended from the ceiling. Its functional circuitry and wiring is visible behind the picture plane, exposing its genius craft.
Video courtesy of the artist and bitforms gallery nyc.
To learn more about Daniel Rozin’s work, please visit:
bit.ly/nLESCP
bit.ly/AmsFdp

Other examples of kinetic displays? We’d love to see them.

More Than Ever: Tour Dave Smith’s Monster Synth, the Prophet 12