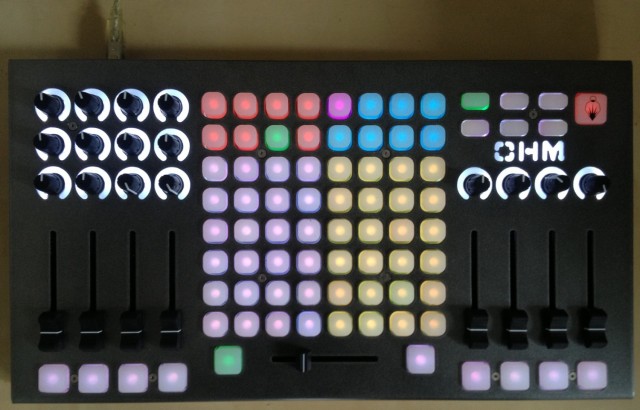 Livid Instruments is now best known as a “music” controller maker, but the DNA of the company comes from live visuals. Accordingly, the OhmRGB looks a bit like a visual controller – banks of faders on the left and right of a grid, crossfader, and groups of parameter controls all give you a hint that you might use this for two-channel visuals.

The makers of Vdmx have a terrific, detailed tutorial on mapping OhmRGB to their popular semi-modular Mac visual software.

It’s just a test, but there’s also some wonderful mayhem when the Block, another grid controller from Livid, is combined with Vdmx and the monome software mlrv.

And while we’re at it, for Create Digital Music today I write up a hands-on with the Livid Base, as seen at Musikmesse in Frankfurt. Base is also a good candidate for grid controllers for visuals, with no moving parts and a portable design, and a fader/grid/bank combination that would seem a natural for visual performance. Livid Base, at Musikmesse.