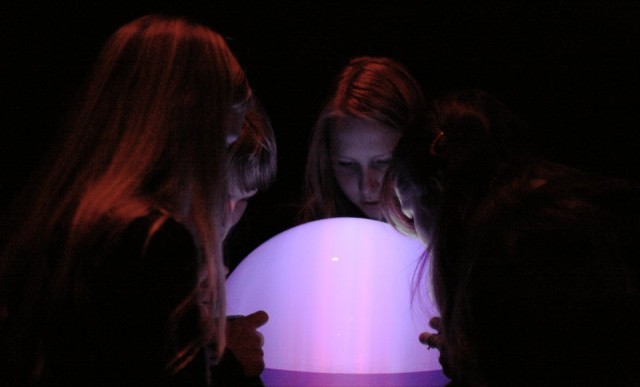 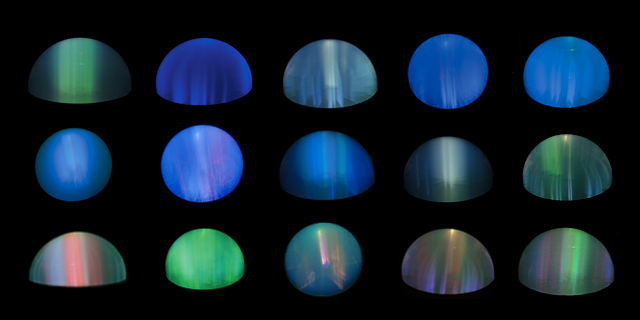 Blast from the past: this color organ is from 2007. But it’s a beautiful demonstration of light and sound, fused into a single interface, and thus worth mentioning as I pull together notes for a talk at Mapping Festival tomorrow here in Genève. Compare the 60s-vintage Lumigraph of Oskar Fischinger, which I write about today on Create Digital Music.

In gooey pinks and purples, traced with imaginary sparks, the game controller-manipulated system resembles looking into the heart of a great jellyfish made of plasma.

From the notes, as well, are some nice thoughts and references on other “painterly” av interfaces and color organs, including the PhD dissertation work of none other than Golan Levin.

Lightbender v2 is an audiovisual instrument developed for four players each controlling the expression of a color and a tone. It was exhibited at the contemporary music festival Sound Around (2007) in the Plex music theatre in Copenhagen.
The instrument incorporates a half sphere shaped water tank that serves as a semi-3D video screen. A particle system is projected into the tank leaving illuminated traces in the water. The sound is based on an additive fm synth with filtered white noise. Synth parameters are mapped directly to the behaviour of the particle system. The sound is emitted from four speakers in a surround set-up where the panning of the sound fits the position of each player and the movement of the particles. The physical interface consists of four modified game pad controllers.
The first version of the instrument which was built for the exhibition Social Aktion (2007) at The Museum of Contempoary Art in Roskilde had only visual output. The initial idea was to engage people socially in a musical experience by enabling the control of visual expressions while listening to a selection of the museums extensive sound art archive.
Building color organs is no novel idea. The first in this family of instruments is the Clavecin Oculaire completed by Louis-Bertrand Castel in 1734, but the idea of audiovisual coherence dates even further back (Peacock 1988). Since then many have followed, most notably (I think) Thomas Wilfred’s Clavilux from 1919.
I’d like to thank Golan Levin for compiling a brief a historic overview in his PhD thesis from 2000. Thanks also goes to Morten Søndergaard, for the invitation. Museet for Samtidskunst, for providing materials. Daniel Høier Øhrgaard, Morten Carlsen and Thomas Sørensen for general help. Marie Louise Andersson, for game-pad modification help. Michael Edinger, for help with the electronics. Enrico, for lots of practical help at the museeum. Dennis Paul, for teaching me a bunch of Java tricks. Christian Riekoff, for providing the procontroll library.
Peacock, Kenneth: Instruments to Perform Color-Music: Two Centuries of Technological Experimentation. Leonardo 1988. Vol. 21, num. 4, p. 397–406.
Levin, Golan: Painterly Interfaces for Audiovisual Performance. PhD thesis MIT 2000.

The project is the work of Copenhagen-based Sixth Sensor, aka Carl Emil. Loads of other projects to explore of his, as well.