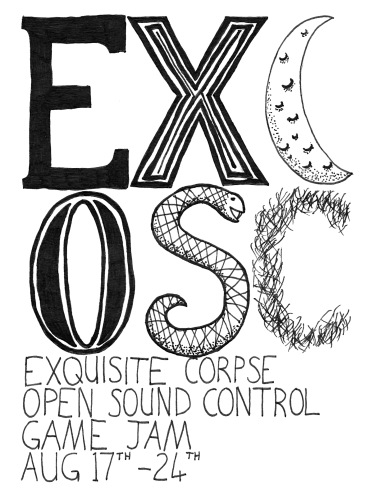 Game jams have already begun encouraging creative, improvisatory game jam, by gathering designers and artists together and motivating them with tight deadlines. But here’s a new concept: what if all the games could talk to one another? What if they could all respond to the same basic game inputs, but with differing results?

Using the network protocol OpenSoundControl (OSC), a game jam this week tests what would happen. Each game is both transmitter and receiver, dealing with the position and color of a player (in two-dimensional space), and position and color of an “entity” (be that an alien, a hamburger, or whatever you’ve added to your game).

Beyond that, everything is open to you, the designer(s) – meaning this could cover quite a lot of ground.

OSC’s name is misleading in that it never necessarily had to do with sound; it’s really just a way to standardize real-time communication over a network. As the organizer puts it, “a shared network protocol means that all the games made for the jam can be hooked up to each other, with chaotic, unpredictable, and exciting! results.” But to aid those less familiar with the protocol, there’s even a free download in Lua that does the work of implementing the protocol for you.

For a further explanation, rules, links to helpful OSC libraries for game engines like Unity, and more, see the thread on an indie game forum:

There’s apparently some flexibility with the dates, as well, if that makes a difference.

We hope some CDMers get involved – let us know if you do, and we’ll feature your work! (Take screencasts, etc.!)

gamingprogramming
Atari, at 50, leaves a legacy of electronic imagination in visuals and sound
development
CLAP is a new open-source plug-in format from Bitwig, u-he – do we need it, and who will use it?
gamingindie
Crank it up: A noble and elegant simulation of playing French Horn for Playdate
Community
Darwin Grosse, musical visionary and voice for Max and DIY learning, has passed away