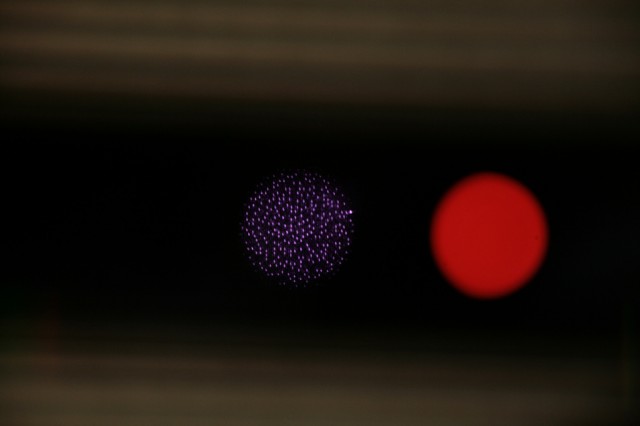 Eye of the tiger: a look at the sensor on the current Kinect hardware reveals the scattered points that form the image of a depth map. Photo (CC-BY-SA) Ben Frantzdale.

It’s not overstatement: the Kinect has changed vision on computers. It’s made a range of techniques more accessible and affordable, it’s spread what were once laboratory ideas into millions of homes, and it has gathered a swath of artists and inventors to using vision who never had before.

But in the process, that open source world has changed Kinect – and Microsoft. No more do we need a bounty to hack Kinect. Now, Microsoft and the open source community can work together.

The Kinect SDK already supported C++, C#, and Visual Basic, as you’d expect, and more recently even HTML5 and the Web. Now, you can use the official Kinect for Windows library (and hardware) in your openFrameworks or Cinder application. You need Windows (because it relies on Kinect for Windows), and it’s 32-bit only for the moment, but you can then use oF or Cinder with Visual Studio versions 2010 and 2012 Express and above.

It could be worthwhile running Windows to get at this library; tantalizingly, they promise, “Gestures, Face-Tracking, and the Voice API are all on their way.” Some of those capabilities are more work to get at using hacks, and can require lots of installers.

Also, while this is Windows-only, someone could conceivably port the API to other platforms, though the main utility here is .

Updated: now proper open source software, with the inclusion of a (very permissive) MIT License! (Yes, I forget the license file sometimes, too…)

But even beyond the specific product here, the relationships built in collaboration are themselves significant. Olivier Bloch and Adalberto Foresti from Microsoft, leaders of Redmond’s open tech initiatives, worked with oF contributors Joshua Noble and Microsoft artist resident James George, and Cinder contributor Stephen Schieberl.

Also, I find that having people specializing in certain OSes can benefit open projects, even if (or especially if) the goal is ultimately best-of-breed platform integration. Windows developers may want to use Visual Studio just as Mac users want to use Xcode or Linux users emacs (or what have you). And they want the easiest installations (especially working with students) and best platform integration.

The other good news is, all of this work should continue to benefit working with the upcoming Kinect One sensor. Contributors tell me that APIs should be the same or very similar. And since that sensor will initially work primarily with Windows, this very project could help artists hit the ground running as the first pre-release developer sensors ship this fall.

If you give this a shot, we’d love to hear your impressions – and see what you do with it.

Congratulations to the contributors here; do keep us posted as this continues to develop.