And that’s what the new Arturia MatrixBrute is. It looks like a fake Photoshop mockup you’d see on a forum, perhaps. But it’s real. All real. Close your eyes for a second and let your retinas recover, and let’s sort out what is actually even happening here.

Arturia claims in their press release that the MatrixBrute will be “arguably the most powerful analog synthesizer ever created.” It certainly will win the award for some mosts – most knobs, most buttons (in a giant matrix), most ports. (And it should make Matrixsynth happy. No green, though.)

The specs make some sense.

The modulation matrix is where things get a bit … hectic. Arturia says the idea is to give you modular “without the painful patching practice.” Instead, all the routings are accessible by a light-up, touch matrix.

In MOD mode, any of 16 modulation sources can go to any of 18 modulation destinations – no patch cords needed. An E-Ink display shows you what’s going on.

As a sequencer, the same matrix lets you create patterns, with STEP, ACCENT, SLIDE, and MODULATION options – sort of monome/Push/Launchpad-style.

In PRESET mode, the matrix simply lets you hit one of 8×8 presets. (Basically, instead of turning a knob.) Okay, of the three, that’s sort of a waste of that giant set of buttons, but it’s there if you want it.

As for the synth itself, it really is apparently 100% analog signal path, with chorus, delay, and flanger analog effects, all route-able from the matrix. 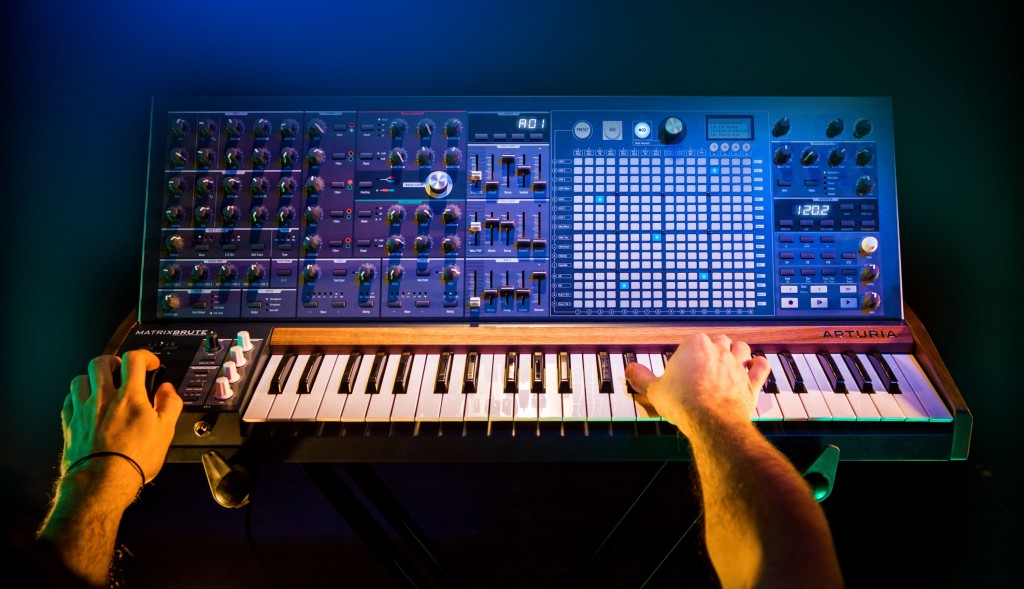 And we don’t know exactly how it sounds, either. (What, you want a synth to make sounds?)

But it’s coming this spring. I’m meeting with Arturia shortly; let us know if you’ve got questions. (Other than the price question.) More:

analogHardwarekeyboardssynths
The Oberheim OB-X8 is a beast – here are more sounds from it, straight-up
analogCV
The best way to integrate Ableton Live and Eurorack modular – for any rig
HardwareMIDI
MIDI Polyphonic Expression has been updated with one powerful feature: better documentation
analogCVHardware
Dreadbox’s new 200€ Dysmetria kit is an insane amount of analog groove fun