Here’s all the coolest new gear from Messe and Superbooth, in one place

There’s a Eurorack craze on. Synth fever continues to spread. Instrument and software makers keep innovating. And there was reason to time all of this new gear madness to the beginning of this month – with not one but two massive trade shows, each a short Bahn ride away from one another in Germany. It’s almost too much. So, we’ve put our favorites all together, to keep it all straight.

First, of course, vicariously appreciate the shows in our photo galleries:

And we already covered what we thought were the runaway hits of the two shows.

The biggest news by far was Pioneer’s standalone sampler hardware. If it seemed like we covered it a lot, it’s because we wanted every last detail, and because it seems a milestone for the industry that the biggest name in DJ gear is getting into the field of production / live performance / standalone hardware.

So read our news stories, Dave Smith himself telling us about the filters and his approach to analog, and a hands-on with more details.

Superbooth wasn’t about any one big story – the scene was everything. (And a lot of the news was introduced at NAMM in January – we’ll do a round-up of all that’s new in the world of modular soon.) But the Bastl Instruments crew stole our hearts:

There were a lot of other stories from the two shows, though. Here are our picks for the biggest news.

Softube want to give you a modular in software 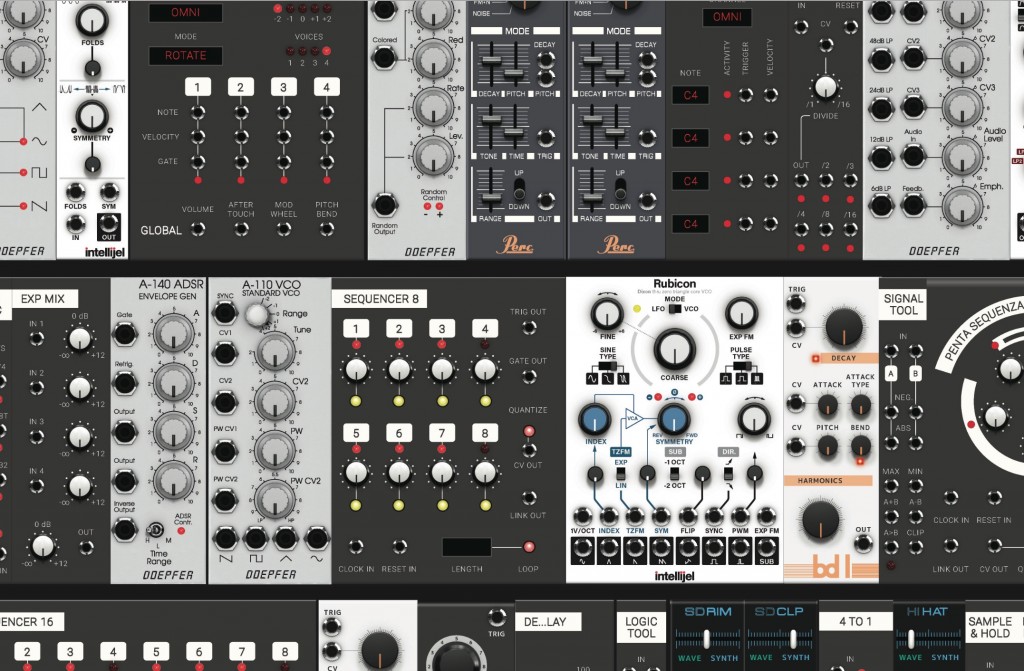 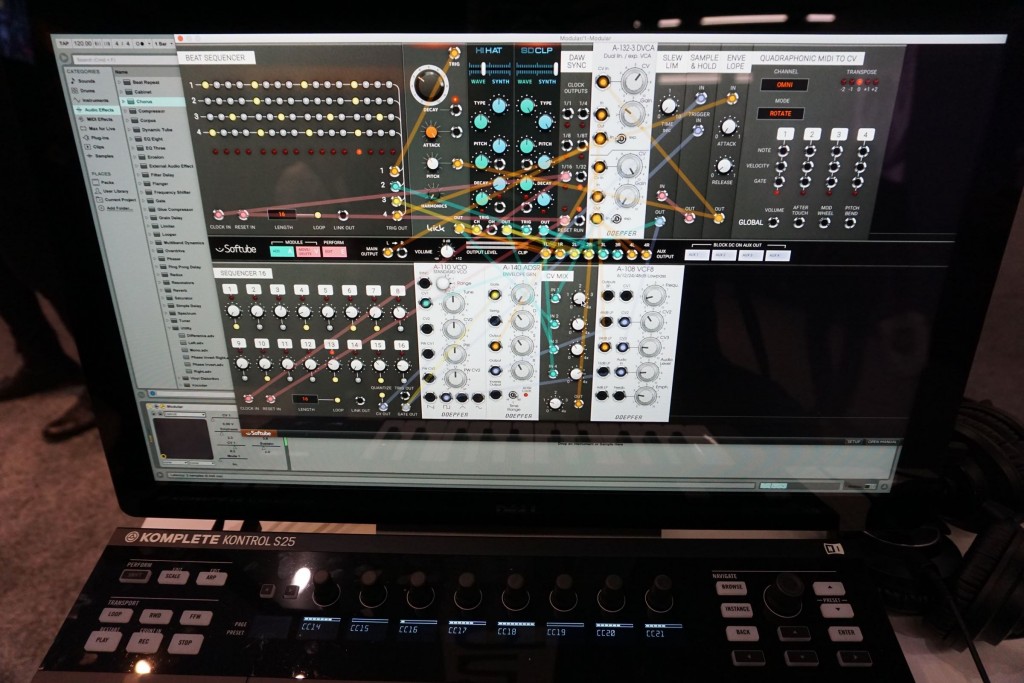 This was the biggest surprise of all for me. Softube are doing software emulations of popular modules – and I mean direct emulations, as in ones licensed by the likes of Doepfer and Intellijel. The model appears to be creating a platform – entry level is US$99, but then it appears you’ll be buying more modules in virtual form. The interface is really intuitive and smart, and I don’t doubt the Softube sound will be fantastic. On the other hand, it’s strange to see slavish recreations of hardware. One to test. 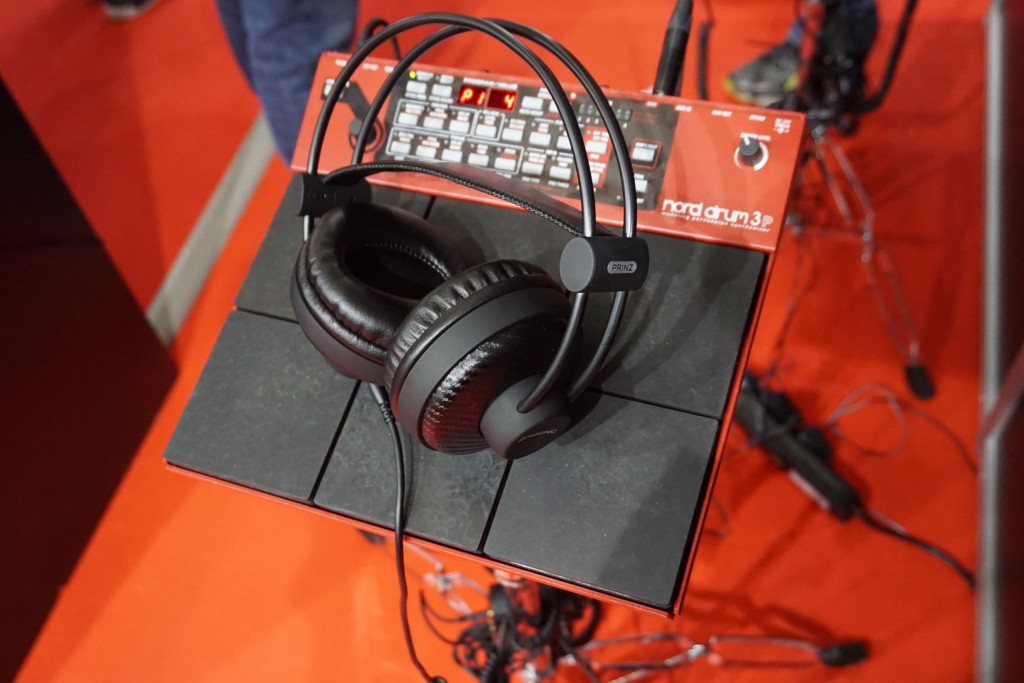 The Nord Drum is a benchmark for electronic drum hardware, and the 3P was one of the big hits of Musikmesse – even as people complained that show offered little news, this was a big deal. New in the 3P:

DASZ ALEX is an expandable synth/sequencer 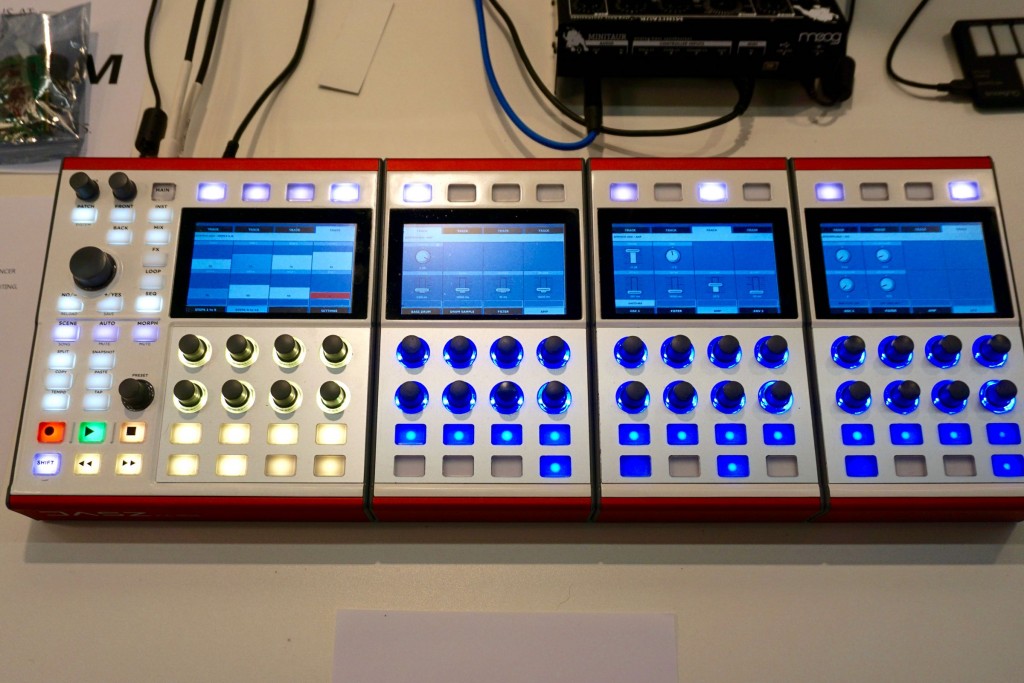 This one I didn’t expect. ALEX is the latest take on embedded hardware – display plus controls, synth and 4-track sequencing modules, which you can combine into bigger systems. It’s a nice idea, even if others have failed to do something similar. We’ll have to watch this one. 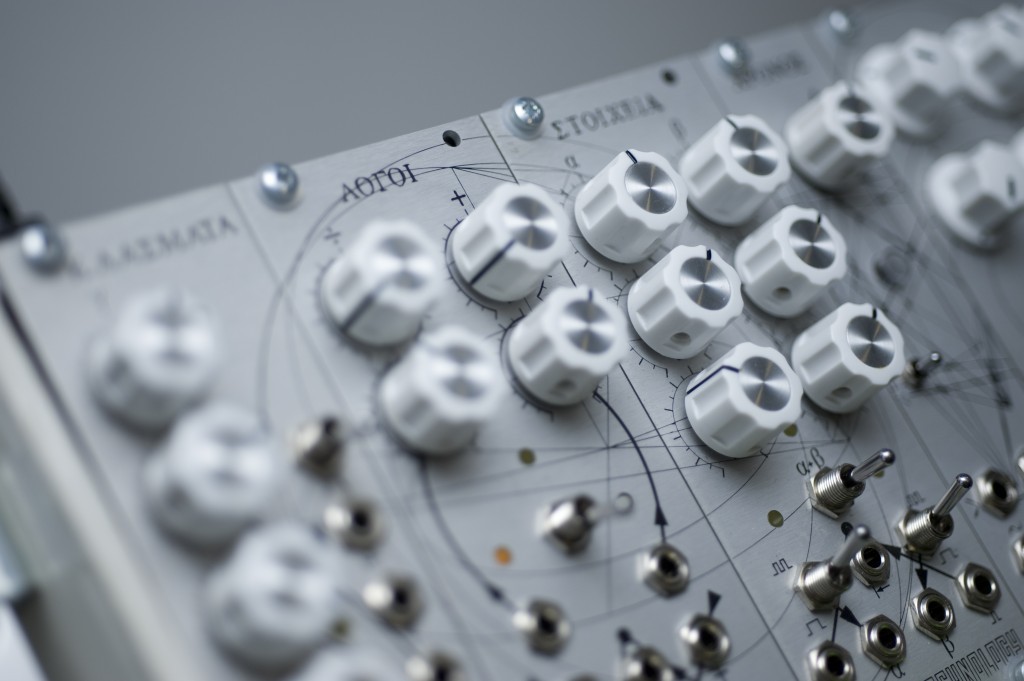 Hey, you bought a modular to get away from the screen, but… now you kind of want a screen. With a new multi-function OLED display, Rebel Technologies have a window on signal (as an oscilloscope) as well as functionality with their OWL module, which works with Pd. Rebel also unveiled some videos explaining how to use the free (software) Pure Data environment to turn the module into almost anything you can imagine, below. It’s great to see the truly open-ended world of software come together with physical patch cords in this format. I hope we explore this more soon.

NI are combining Reaktor Blocks with your Eurorack

It’s all about the hybrid – digital with analog, virtual patch cords with real patch cords, the flexibility of a computer with the flexibility of Eurorack, each doing the job it’s best at or tailored to exactly what you need. And Reaktor was a big player at the Superbooth, combining new modules with physical hardware (we’ll look more at these in detail soon, but here’s a video).

Dave wasn’t just busy partnering with Pioneer – he had a new module, too, one of the stand-outs of Superbooth.

A personal highlight for me was getting together with Tom Whitwell, former editor of the Music thing blog, who has turned now to the hardware modular business. Back when CDM started, every morning began with coffee and looking to see what Tom (who in those days was waking up in London five hours before my New York time) had posted – a friendly blog rivalry. Now, instead, we get to see what his ideas for gear are.

And Tom’s ethos of DIY and oddness is embedded in some great ideas. The Turing Machine Eurorack DIY kit is a fascinating melodic generator. The new version is easier to build, does pulse out, and has a rotary for loop length.

The prototypes are looking even cooler – there’s Magnetophon, a tape head and amp, and Elecrophone, a guitar pickup in a module. I love that these are accessible ways of immediately experimenting with sound.

Erica are fitting a modular into a tiny space 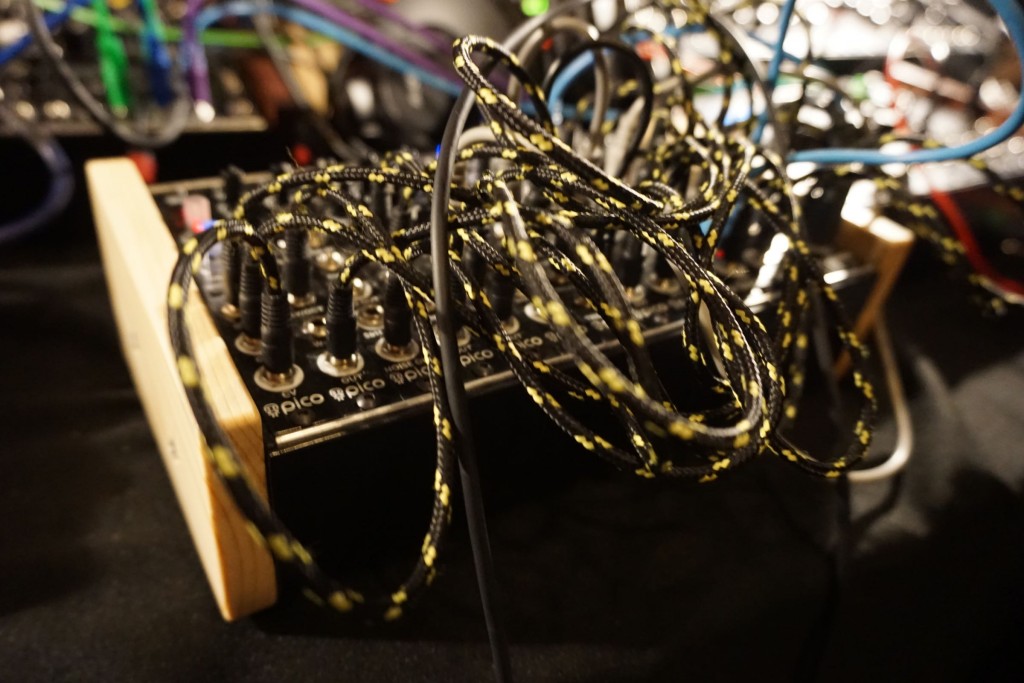 The “Pico” line from Erica Synths is an idea whose time has clearly come – the notion is to fit a lot of modular capabilities into a small form factor.

Quite a lot more from Erica lately, too – one of the finest and most prolific builders out there, hailing from the former Polivoks home of Rīga, Latvia:

Birdkids are yet another clever full-system entry into modular

It’s amazing how many great ideas are out there in modular. This was my first introduction to Birdkids from Vienna at Superbooth, and there’s not one but two really beautiful, intelligent systems. I could say more, but Birdkids have an enormous playlist of videos to watch:

Plus this is a first, as far as I know: a USB-powered module.

Patchblocks are powerful, plug-and-play modules that work together – or, now also work with Eurorack form. These were another favorite for me; check them out in videos (including a new sequencer and keyboard):

There’s something great about having a dedicated tool and workflow for sound editing and mastering, and WaveLab 9 remains a hold out in this category. WaveLab 9 is the most robust update in a long, long while, packed with new features for niches from field recording to processing for mastering. Here’s a look at some of what’s new there:

Eventide team up with Tony Visconti to help you relive “Heroes” 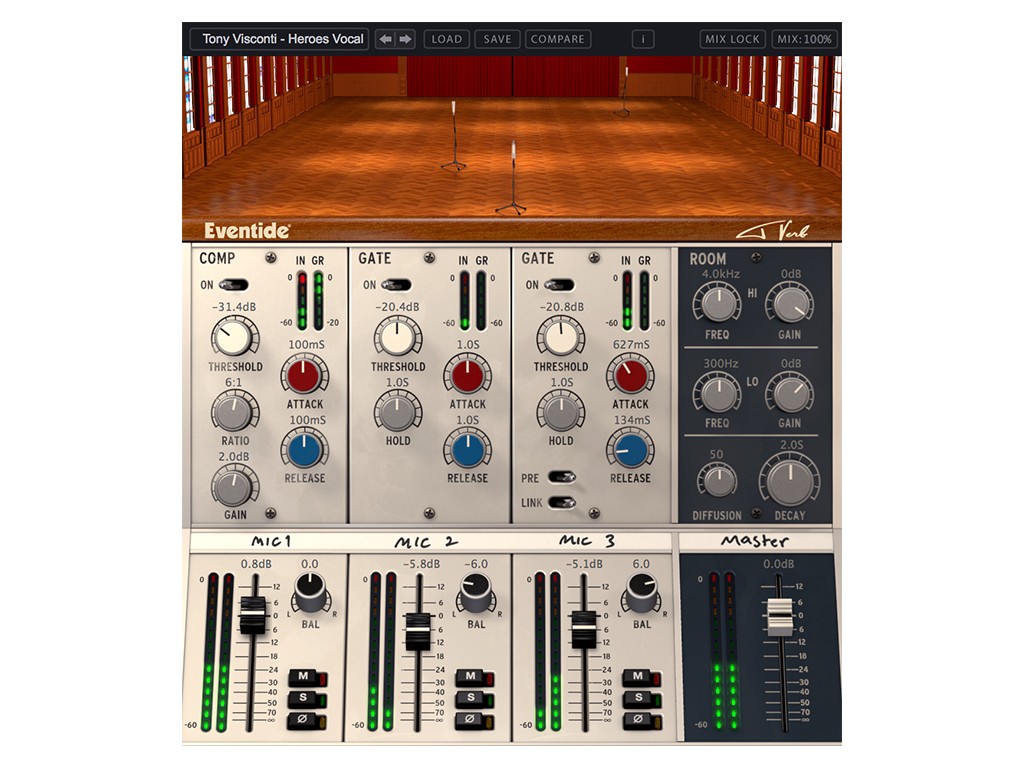 This idea is kind of insane – and very cool. Eventide worked with the producer who recorded “Heroes” to give you a software simulation of what took place in the studio in Berlin. Visconti says:

“I have plugins that emulate rooms but this concept, to have the set-up all on one page, I never thought it was possible” commented Tony Visconti, adding “The 3 microphones are correct, the room is correct, and now that it’s in stereo, you’re actually hearing something that I never got around to doing when I was in Berlin. It’s just great.”

It’s not all Eurorack. 5U – the larger format that launched all of this, and that matches the classic Moog – is alive and well, as evidenced by a company like Moon Modular. Watch:

This crazy 8-channel sampler is crazy 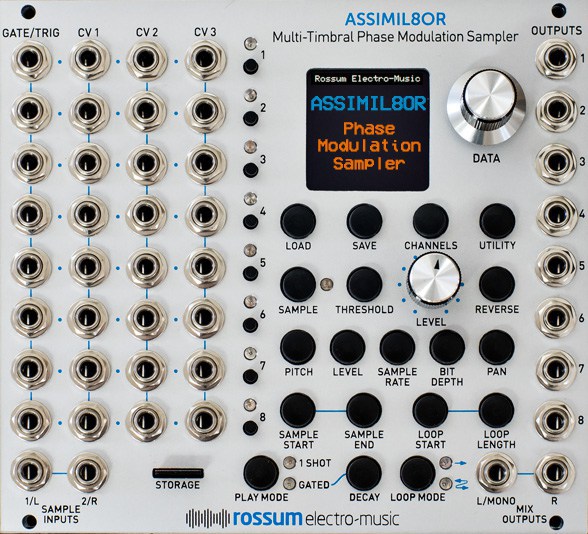 E-MU founder Dave Rossum had the module that ate Superbooth. It’s an eight-channel, multi-timbral sampler – with each channel with separate outputs, configurable how you’d like. You get 24-bit digital, looping and sampling, CV-controlled scrubbing, 1-shots and gate, and then the ability to route CV to anything – sample and loop start and length, panning, even pitch and bit-depth and phase modulation. It’s basically a little computer.

iOS can play along, too

My neighbors, an alliance of music app developers (including the savvy sequencer Modstep) showed that not only digital was welcome, iPads were, too – with wireless sync and a live performance:

WMD: modular, the next generation

Robotic drumming, as a product

Polyend’s Perc wowed crowds at both Messe and Superbooth. They have two products – a mechanical, robotic instrument that plays real drums from any MIDI source, plus their own monome-style dedicated hardware sequencer. I may have to go visit this Polish company; they’re doing amazing stuff.

That’s all for now, folks. Did we miss something you feel was newsworthy? Let us know in comments below.

Change your mood with our favorite springtime mixes

analogeurorackmodular
Befaco’s new Pony wavefolding oscillator module: funky modulations, rich timbres
events
Ars Electronica, in scale from microcosm to epic, examines a planet on the edge
analog
Korg drumlogue has it all: analog, samples, digital synth, SDK
DIY
A bubble wrap-popping organ, by Simone Giertz and team, is sure to be your new favorite thing