We’ve reached the mature age of music apps. You’re likely to use fewer of them, and the landscape is saturated with the most popular ideas. It’s also clear that iPad, not Android, is the viable tablet platform. But the few apps that are left standing as serious music tools are better than ever. They’re easier to integrate with your computer and standalone hardware, and they feel more like instruments and less like toys. They walk some line between making music production more accessible to beginners, and offering refreshing simplicity to people who are mixing them with other gear. And Skram, free with free add-ons, is a nice microcosm of that in its update.

We’ve already seen a glimpse of what the iPad app Skram might become, when we broke the story in March. The basic conceit was familiar: provide some fun synths and drum machines and a way to play them quickly. And it caught our attention as it comes from Liine, developers of the must-have Lemur controller app.

But where Skram set itself apart then was in offering some compelling sound quality, and in allowing you to generate sophisticated rhythms and melodies. It did each of these quickly with consolidated knobs: shift this, and change the mode/key, or the rhythmic pattern (including some nice syncopations), or vastly impact sound.

Compelling proof of concept, yes. But the first release was limited in the synths it offered, and didn’t have easy connections to other apps.

That changes with the update that just now went live. 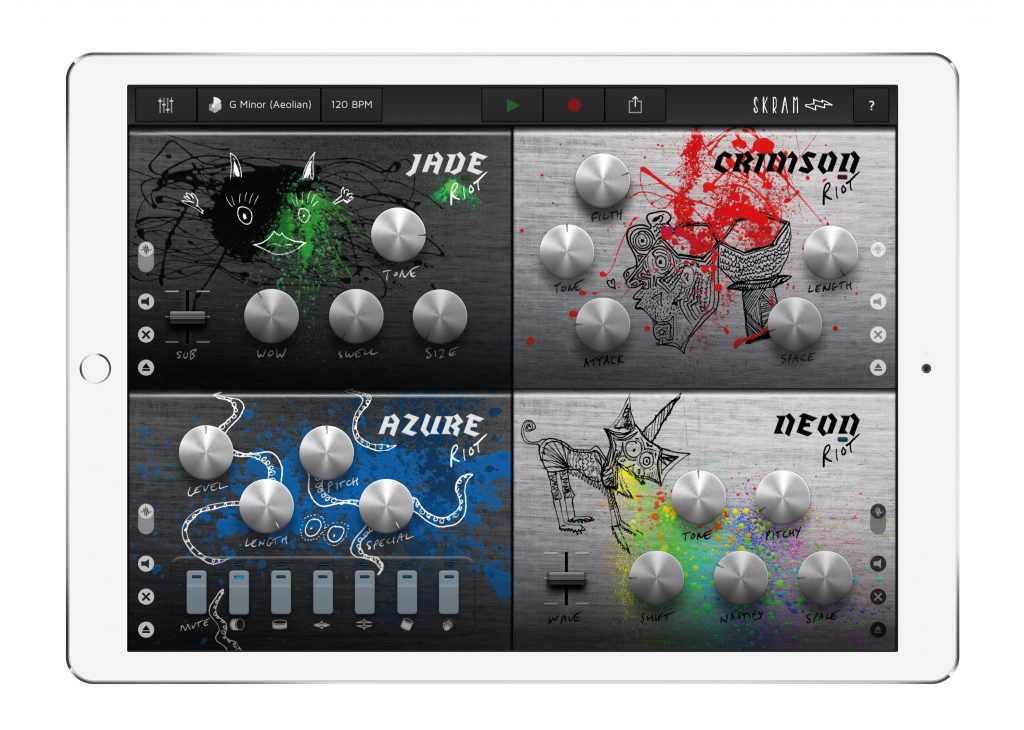 There are four new devices, part of a new pack called “Riot” that emphasizes urban/trap styles (although they could just as easily be used for some heavier/darker techno, too). These for me really fill out the sound of the original (particularly the somewhat vanilla initial drum machine – nice to have more than bread and butter):

All the new synths are great, especially once combined with the batch from the first go-around.

You might expect those would be in-app purchases, but Liine are now up to eight devices completely for free. (Presumably they’ll add some paid ones later on, or else I’m going to have to go down to their offices and bring them food.)

These are nice, but it’s connectivity that moves Skram from “ah, cool” into must-have. There’s now a somewhat ridiculous complement of functionality for a free app:

Inter-App Audio (IAA) – which means it works with Modstep, GarageBand, Cubasis, Elastic Drums, and the like
AudioCopy Support
Ableton Link

Link for me is the big one, since it means you can jam with these instruments and add to, say, an Ableton session or play with friends.

And not only are there eight devices from which to choose, but you can now mix and match as you like – so up to four of one device if you really want.

Here’s a very quick demo session I shot from an iPad with one of the developers, just to show you how it comes together. As you’ll see it’s really easy to get interesting rhythms and melodies and sounds going.

or on the App Store

Watch a wild Loop Station performance made in one shot