Skram is the latest iOS app that claims to bridge fans curious about making music and expert producers, giving you “all you need” to make music on an iPad. So – what’s unique about this one versus everything else that claims to do that? Well, first, there’s the team behind it: Liine are the folks behind the Lemur app and various other software, performance rig, and interactive installation projects. Second, while this initial release represents just a first step, there are already some amazing sounds coming out of the included instruments. And third, Skram builds on the work of other apps in the iOS scene to give you some unique ways to navigate the rhythms and harmonies used to generate patterns. 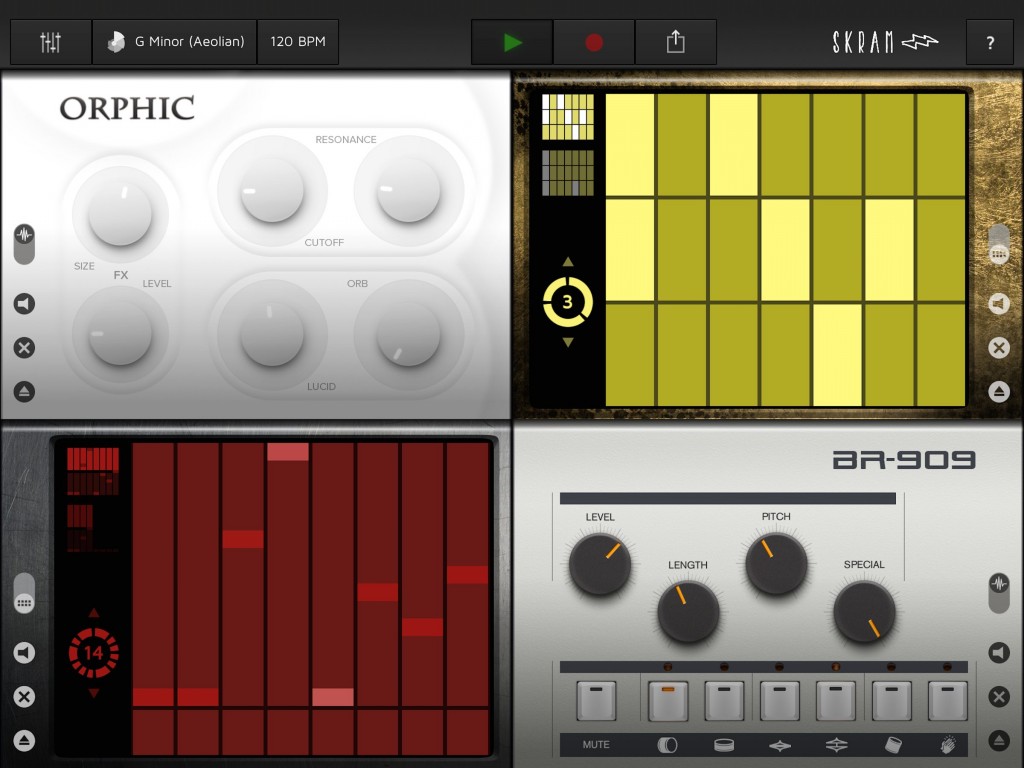 In its initial release, Skram is mainly a bundle of four instruments, each one with an associated pattern generator. There are two melodic/harmonic instruments, Orphic and Heatstroke. Orphic produces bell-like tones and with some crazy re-pitching options; Heatstroke an edgy, metallic synth. Both of those have some mad-sounding delay effects which do wonderful things once you crank up feedback. To that, you get two more conventional offerings – the requisite 909-style drum machine (BR-909) and acid bass / lead Skram.

That might have made your eyes glaze over, but the important bit – they sound really terrific. In fact, that alone I think will give people cause to give the app a go.

I had a play with the app on an iPad mini when one of the developers brought over the final build. Here’s what it sounded like – and to be clear, this is me turning on record and trying to play for the first time:

There are plenty of good soft synths and things out there, though, so this alone won’t be enough. Skram sets itself apart with something it calls “Widgets.” So a “Device” is an instrument – a drum machine or synth, etc. A “Widget” is, so far, a pattern generator / sequencer that plays that instrument. A small switch on each device lets you flip it over and determine what notes it’s playing. 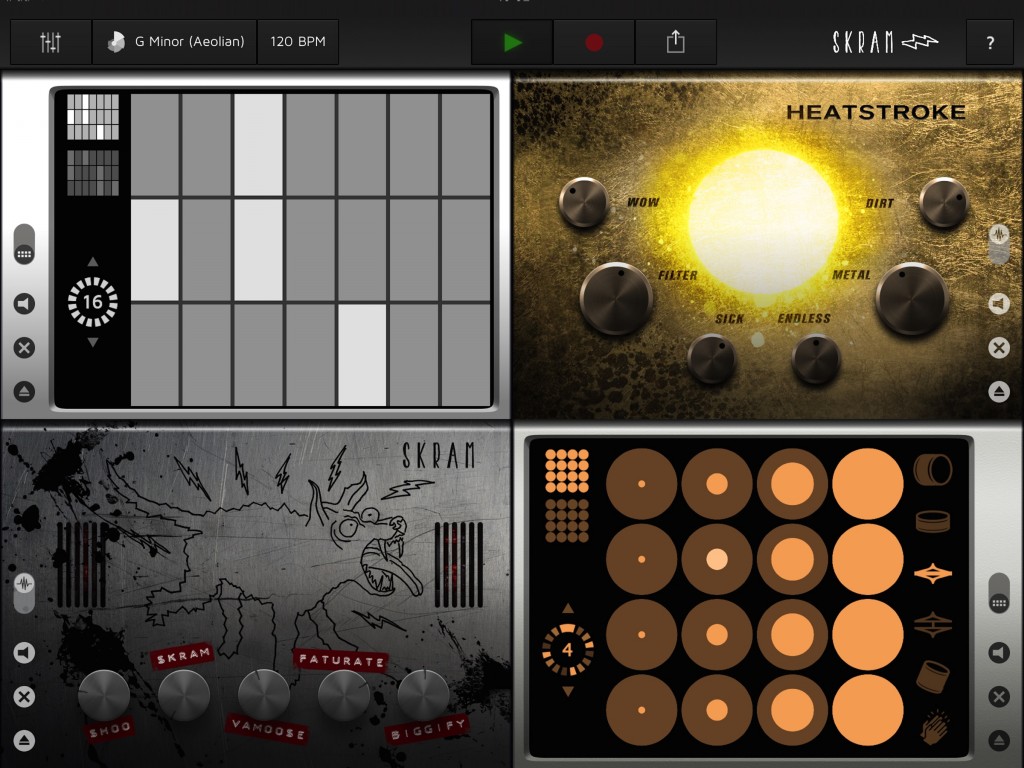 For the bass instrument Skram, this is pretty usual step sequencer stuff at first – tap to toggle steps, drag up and down to change pitch. Ditto the pattern steps on the drum machine – select a drum part (bass drum, snare, clap, hat, etc.), and then tap to add hits on each step. (Cleverly, you can drag to change the velocity.)

But from there, the pattern generators get a bit more unique. Instead of directly tapping in melodies, the other two synths use an arpeggiator. The grid that you see is set by the currently activate key and scale/mode.

Rhythms are generative, too. Rather than manually making rhythms, you can tap through presets to breeze through generative patterns. Liine promises in future these might be even genre-specific.

Here’s the app in action in the developers’ video:

Now, obviously, for beginners this means that you eliminate a lot of tedious labor. But if you imagine this would be restrictive for more advanced users, I think you’d be surprised. By making these patterns generative, discovering more complex polyrhythms is more intuitive – it gets your musical brain working rather than your “what grid am I tapping” brain. I think the piano or guitar fretboard are a good metaphor: while at first blush these devices appear to restrict choice, they encourage more adventurous choices within those limitations.

And because everything is tied to a single root pitch and mode, you can also change harmonies directly. A master control moves everything at once (with some subtly-shaded suggestions that show complementary harmonic relationships on the circle of fifths). 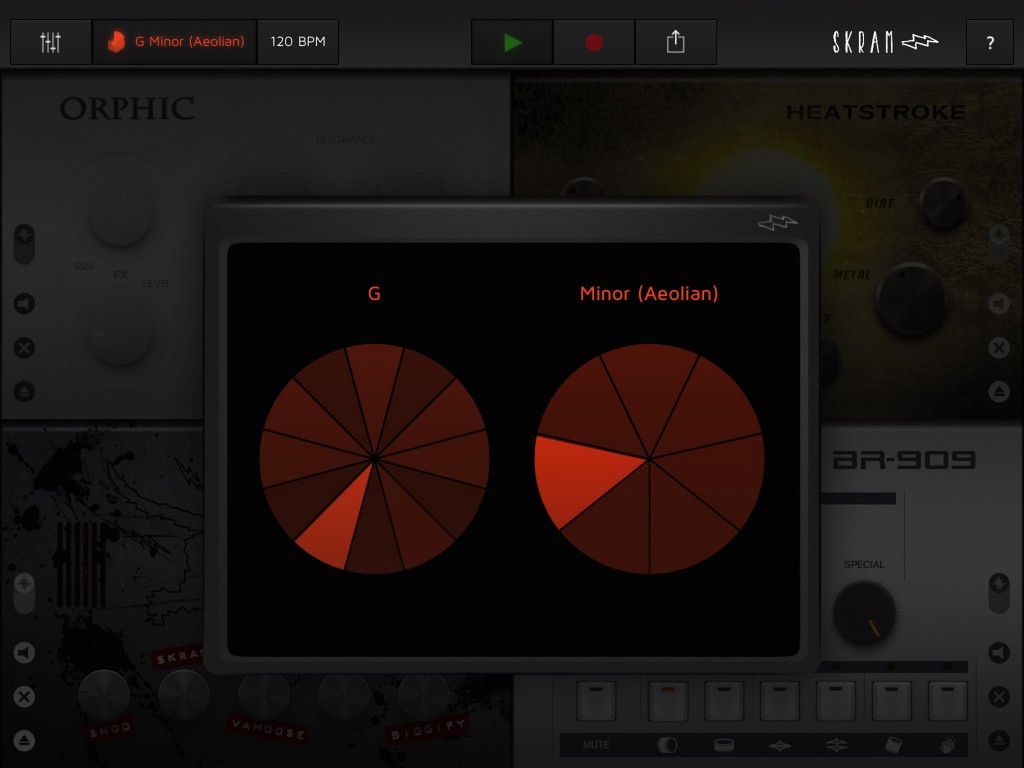 It’s evident that there’s a PhD in composition on this team (one Dr. Nick Bougaïeff). Sure, all this graphical “stay in key” stuff is beginner friendly, but if you do have some theory background, you’ll see some touches that make you smile – like the fact that parallel minor modes get correct enharmonic spellings.

But if you are new to this, there are some friendly step-by-step tutorials. In fact, Skram is closer to games in its hand-holding than the typical music app. 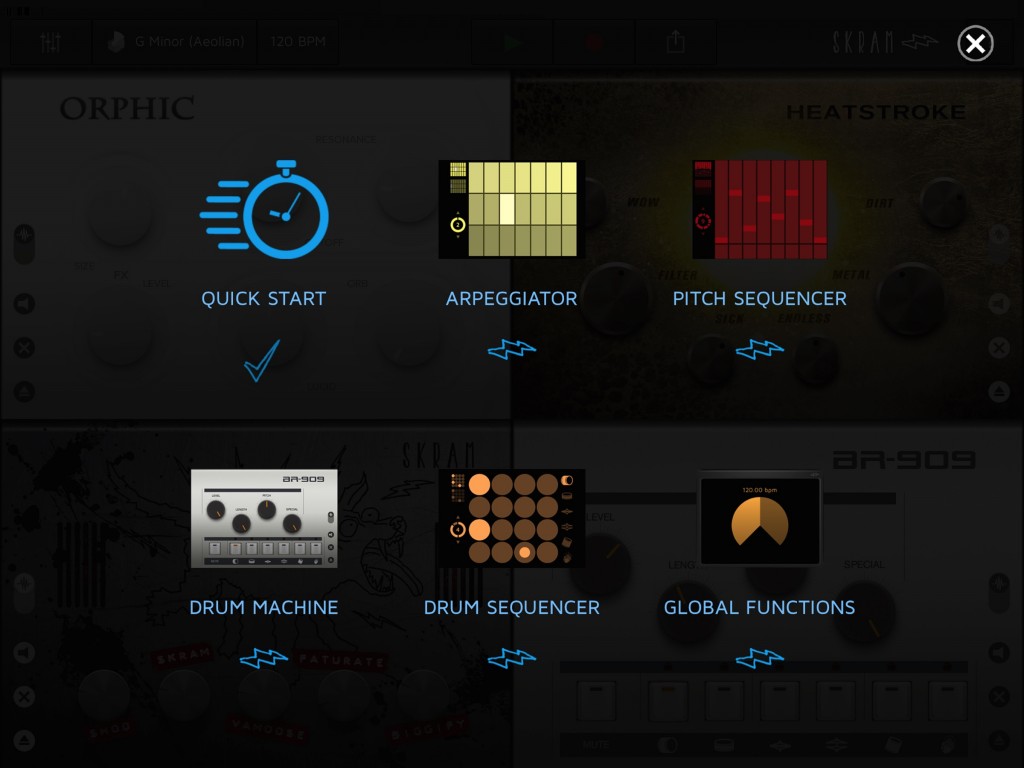 Skram in its initial release is fairly basic. There are only the four Devices, with their pre-defined associated Widgets. You can record and export audio (via iTunes or email), as I did in the demo here. But there’s no additional support for MIDI or audio or sync. I’d do without any of that if it just supported Ableton Link – this would be the perfect app to add to a mobile jam or use with Ableton Live – but that’s not there yet.

I also have some gripes here and there. On the drum machine, for instance, switching parts on the Device side doesn’t switch parts on the Widget side. There’s also some visual feedback that can make you forget that the knobs require vertical motion with your finger, not radial motion. But those are minor – and the instruments feel very, very polished.

Skram even its early stages, then, is a promising look at what’s to come. There’s quite a lot out there like this, but you won’t really get Skram until you try it. What Skram feels is tuned. Every knob is satisfying, and changing rhythms and harmonies feels just as good as cranking up a knob named “Biggify” or “Sick.”

We’ve seen good synths on the iPad. And we’ve seen good rhythm generators, and good melodic controllers. Skram is a glimpse of what happens when all three work together.

A festival to ponder the nature of time