How one community was mapping the future of visuals this summer

There’s a shift on in the worldwide community of visualists, of the growing field of people using electronic visuals as a medium for performance, art, and inquiry. As these media become more mature and more international, there’s a renewed sense of closeness among practitioners. While big media festivals focus on novelty and show, these maker-to-maker events emphasize something else: craft.

This summer seemed a particularly historic moment for not one but two tools – each of them built by small teams who make art themselves. We already covered the Berlin gathering for Isadora, the visual performance tool that has rich connections to the world of dance. Now, we get to look at TouchDesigner, which has made a name for itself as the leading go-to tool for interactive event visuals (among other things). And maybe it’s fitting that unique tools would leave a particular mark. For artists, that particular piece of software is their axe, their main instrument, something to know inside and out.

I asked Isabelle Rousset from Derivative, TouchDesigner’s developer, to help prepare a report on the gathering in Moscow.

And picking someone from the team here works, because these gatherings are family affairs. This is summer camp for visual nerds – a retreat for people of passion. And I was ready for an exhaustive “what did you do last summer” report. We got it, in the form of obsessive notes on what happened and endless leads to check out yourself. 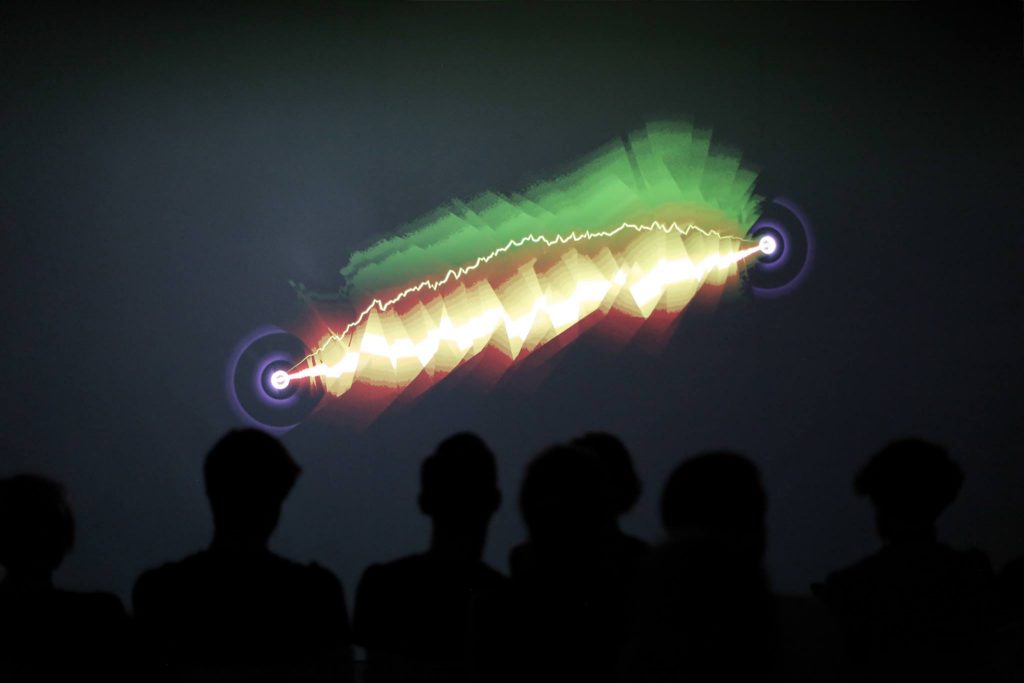 Moscow’s MARS Center is a hub for the city’s electronic media community – one of a handful of places everybody meets to see the latest tech and visiting artists from around the world. And in this case, that same community got their hands dirty organizing the event.

Curiosity Media Lab’s Yan Kalnberzin and Eugene Afonin spear-headed the four-day event in July. It came against the backdrop of the cancellation of Outline Festival (the last afternoon of TouchFest) – but as such, was a reminder of the possibility still latent in Moscow’s scene.

Here’s Derivative on the experience:

It was solidly packed with masterclasses, lectures, demos, audio visual performances and a ‘marathon of interactive madness’. There was zero fluff!

Derivative’s Greg Hermanovic, Markus Heckmann and Isabelle Rousset who were there to participate were blown away on many fronts: the scope, quality, range of TouchDesigner projects and applications, community engagement and support (100+ in attendance), festival programming and schedule where workshops, lectures and masterclasses ran in parallel for multiple days, the generosity and proficiency of the festival organizers for putting together such a BIG and exciting festival (while working on a major project for clients i.e. they didn’t sleep much if at all for days), the MARS Center who provided the fantastic facilities and staffing…. The volunteers and of course the performers and participants whose work and energies were very far out and intense. A ‘hotbed’ of TouchDesigner 🙂

This was a chance to learn if Moscow is ready for educational events like this. And we wanted to see how many people are really interested in the subject. I’m amazed how many people came from around Russia – three people from Krasnodar, several from Izhevsk, from Novosibirsk, and some other pretty far away cities. Ed.: Yeah – uh, Googling those myself!

We are super happy and thankful to MARS Center and their technical team. They totally made half of the event. And of course to all the speakers – mostly friends, but not all of them – that they agreed to perform for free. 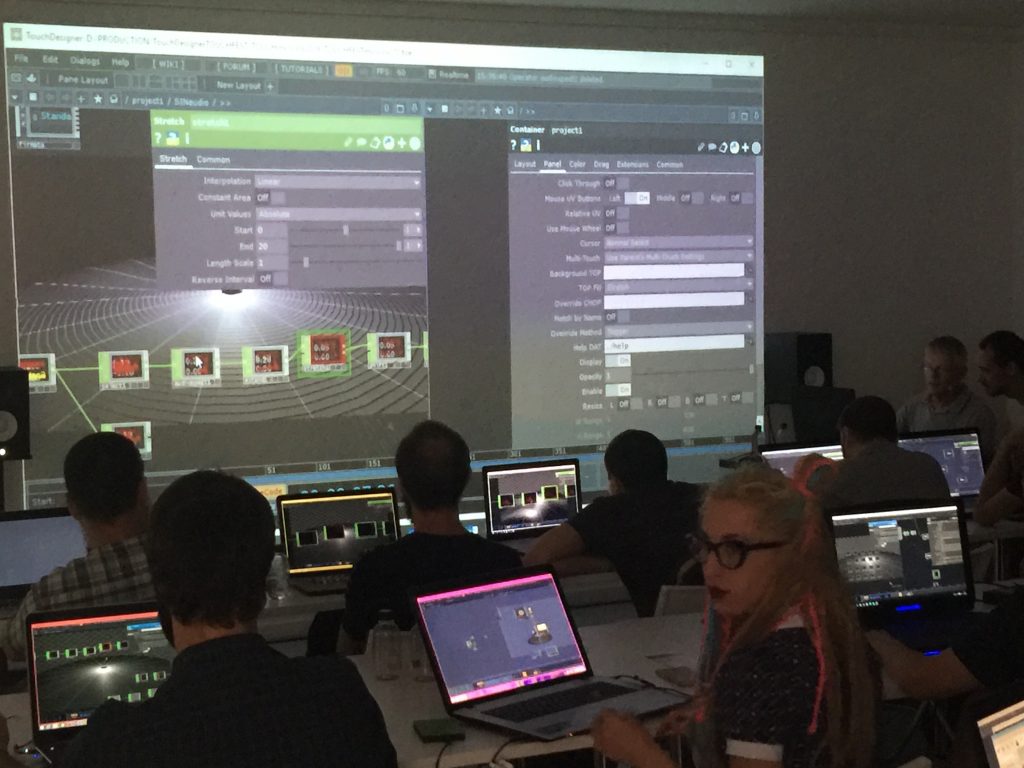 TouchFest’s organizers were themselves long-time TouchDesigner instructors. Yan Kalnberzin and Evgeniy Afonin have been teaching the tool since 2012 – even 3- and 6-month courses. These also culminated in presentations:

Here at Curiosity Media Lab we often get letters about education from scratch.
As we organize such an event, inviting Touch masters from Russia and abroad, we want to give you a chance to understand at least on a basic level what they are speaking about.
Our 8 hour masterclass will start from the very beginning – fields of application, nodes, logic, interface, contexts of the program.

Yan and Evgeniy were teaching again. Other highlights:

Recorded or live sound could then animate movement, light, and color – in two and three dimensions. Gesture tracking transforms the VJ “into a puppeteer.” Andrew is applying the same concept to coursework with kids.

He played the closing audiovisual concert with composer Nikolai Popov and six musicians from the Russian Conservatory. 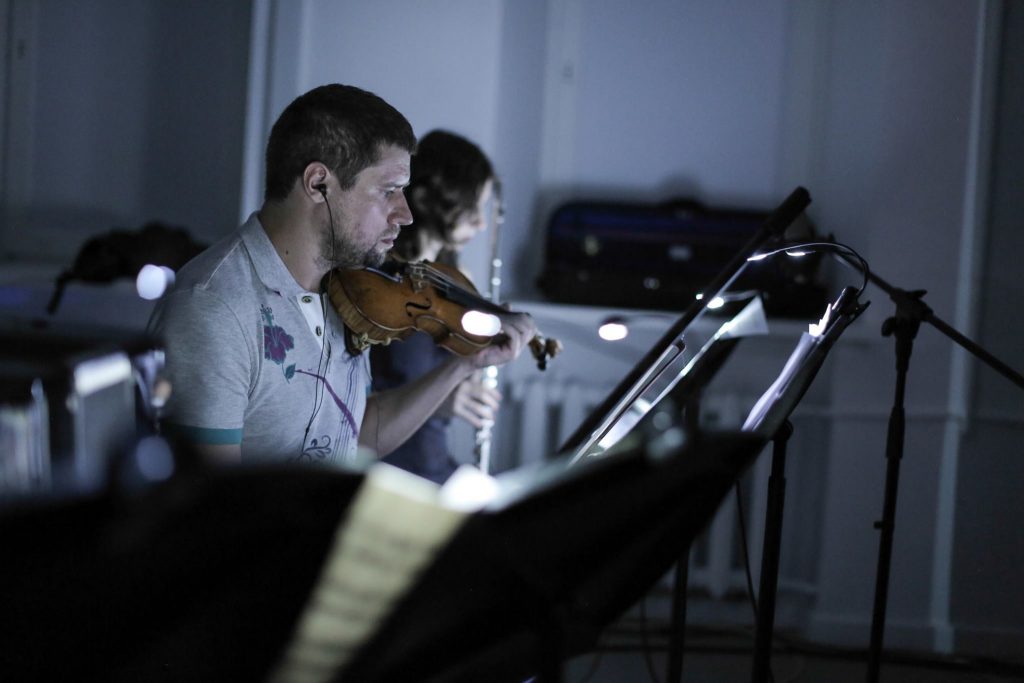 Three days in the Vostochnaya Gallery turned into a circus of interactive hacking, thanks to Ildar Yakubov (someone I’ve also had the pleasure to know).

I like the chaos aspect. As Isabelle describes the event, “NEITHER SEW NOR FASTEN”:

[The marathon] showed the world what pure, boundaryless and unpredictable total interactivity looks like. (At one point, I’m told, a doctor in blue scrubs came down saying he was performing an operation upstairs and the floor was shaking!) There was also a flood!

But for three days the kids worked tirelessly, connecting all kinds of materials to TouchDesigner, including:

“Artists are really suppressed with the totality of technology and this way doomed to a both senseless and endless flirting with it” – some critics say  “Until you are really familiar with the technology you are not able to reflect on it” – says the other  “Turn off that weird shit or I call the police” – say the neighbours.

Armed with these tools, and using the unlimited potential Touchdesigner offers we will challenge an intuitive interface and the planned user experience.

After two days, we will create a real media art gezamkunstverk and put it to the mercy of the crowd.
Oh yes, about two days – the event will take place in a Hackathon mode: we will work tirelessly for two days. Some rumors say that on the second morning, participants will become familiar with the machine learning process and will learn to use this powerful tool in their practice! 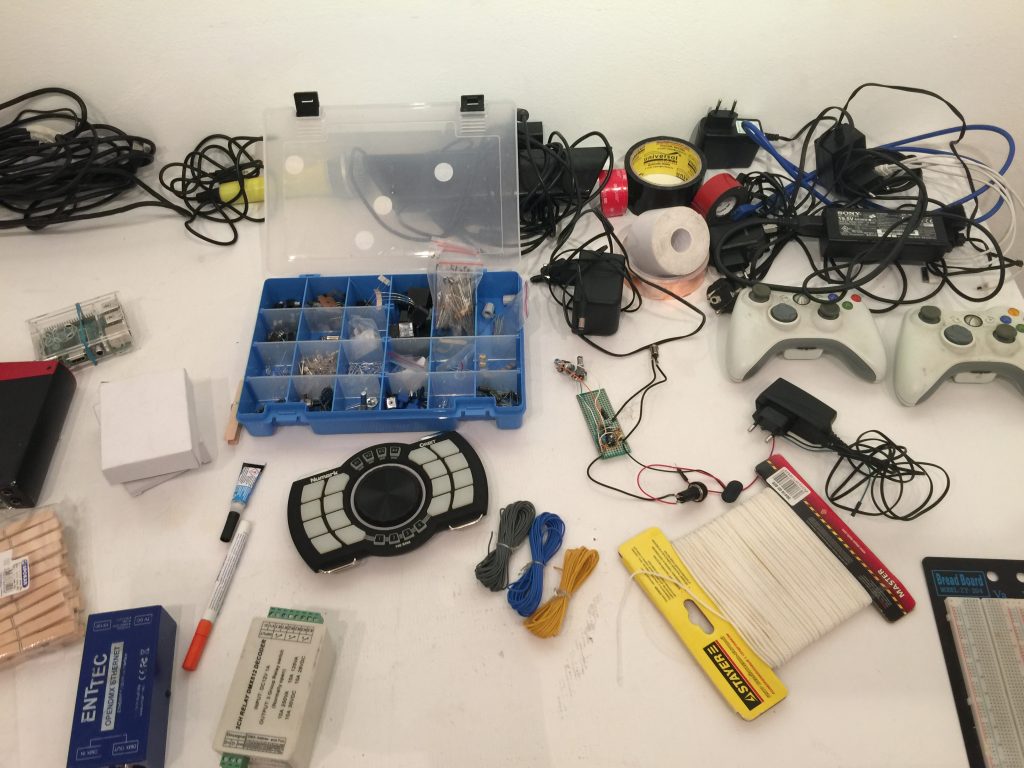 Tools of the interactive madness. 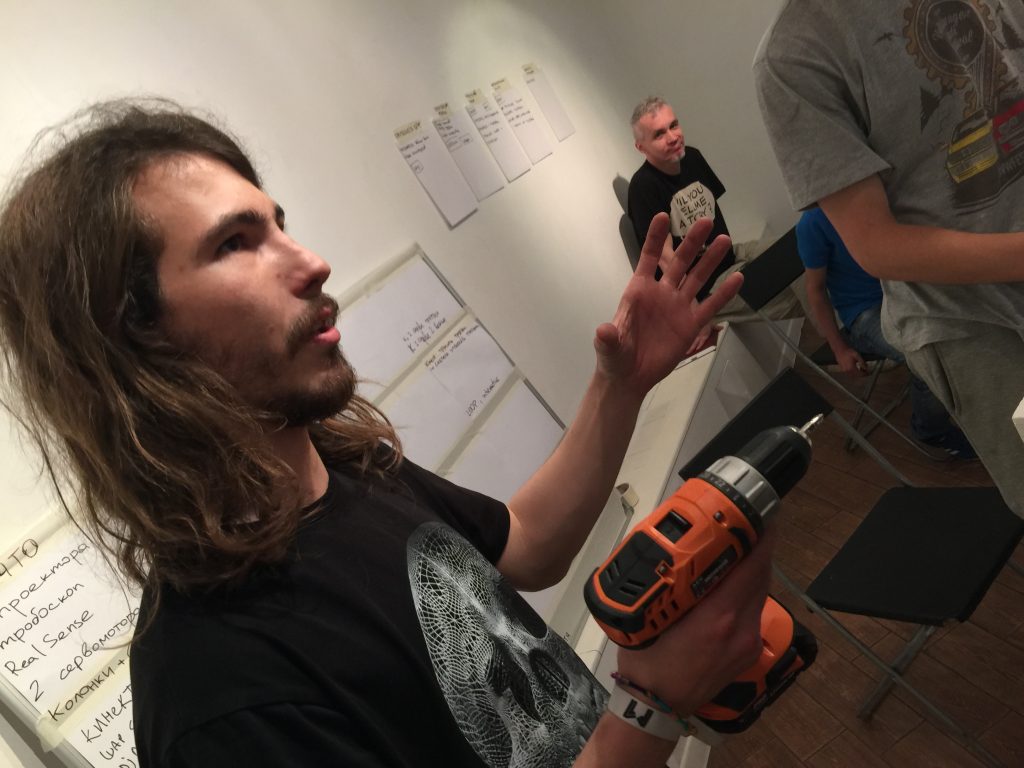 For three days we have collected Krastinator – crazy device like a Rube Goldberg machine, the sole purpose of which was to stop the madness in and of itself. However, the rubber glove could not reach the big button, but successfully deceived Leap Motion posing as a real hand! The result of the analysis of the motion of non-existent bone defunct arms generate sound skeleton projected on screens, mixed with a picture of motorized cameras, controlled their own picture and includes a strobe on the floor rolled robo-ball, grazing contact microphones, vibration motor and the cooler is activated by a small Korg, smoke machine made his work, and all of this in an endless loop of interactions and relationships, secured by TouchDesigner.
Such collaboration with different people and skills backgrounds very useful in every sense of the activity, a huge thank you to all participants – you are super!

Thumbing through the notes from the lecture content, what strikes me is, you could navigate the full program without ever wanting to even use TouchDesigner user and still be really happy. There’s enough content dealing with theory and general technique. Or, on the other hand, you could come to TouchFest wanting to really hone up on skills – even from scratch – and have a ball, too.

To give these two areas physical space, the practical and technical were kept on downstairs and loftier topics literally above. (Nice.)

I was sent pages of notes, so let me summarize. 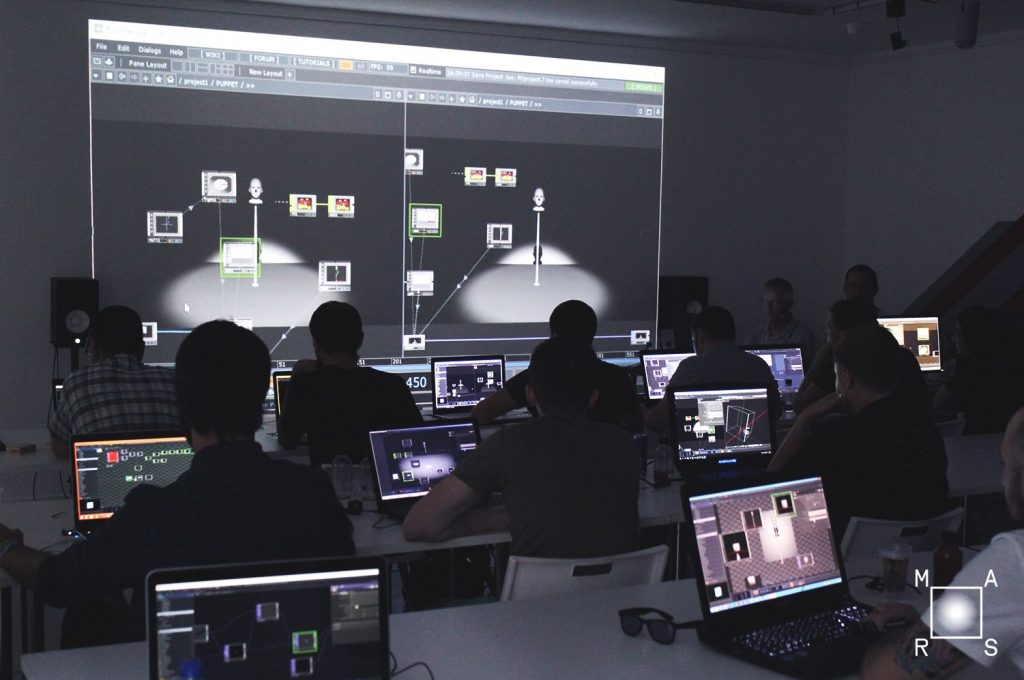 3D mapping technique with Andrew Flat, who has done everything from event design to VFX supervisor, and now is co-founder and technical director of AVEA company.
https://www.facebook.com/FLaT4eRs

A roundtable discussion looked at how to present LED lighting at low costs (from DMX controllers to DIY LED).

Dmitry Karpov covered the “battle” for VR, evaluating platforms and how the technology would shake up the landscape of designers.

Derivative’s Greg Hermanovic looked at TouchDesigner past, present, and (possible) future, in a talk called “A playground for design, and how it got that way” 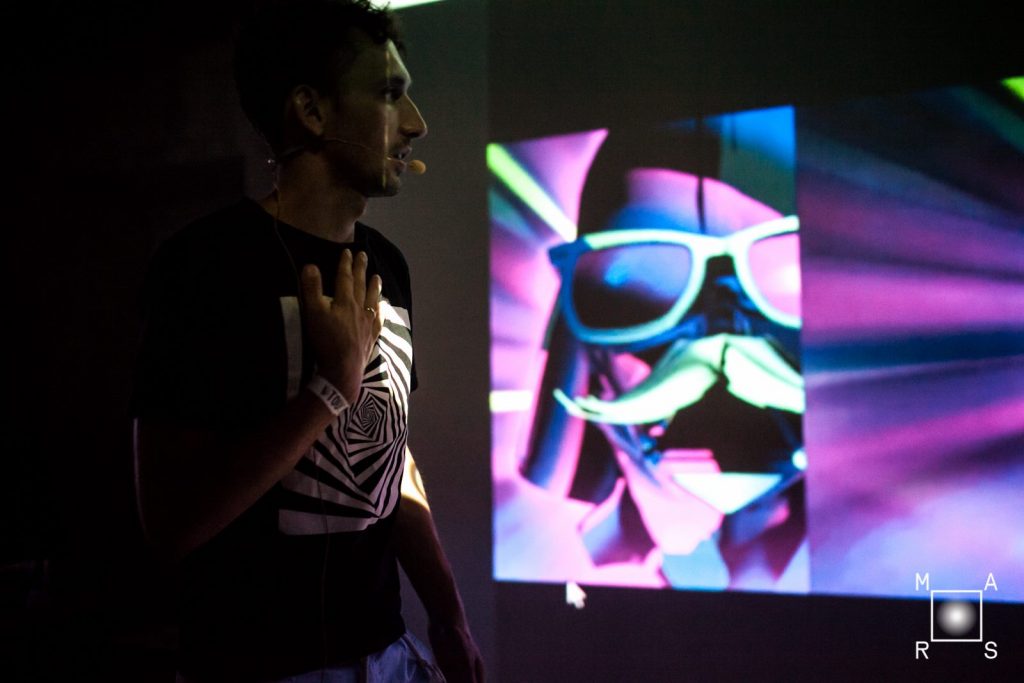 Anna Titovets (Intektra), of Russia’s Plums Fest, went deep into the question of live performance. I will paste the whole description here, as I think it matters:

Live video performance: from fractal tunnels to live cinema
Live video performance as a social and cultural phenomenon in contemporary media art.
Talk and talk about video performance as a format, which is a kind of marker for the changes occurring in today’s information society in the context of global changes taking place with the psychology of perception of the information society, with the communication methods with the audience and global technological development. How did the “vj” what “protovidzheing” Live Cinema differs from other genres, as changes in video performance linked with the development of technology and the changes taking place in society in general and in music in particular.
As part of the lecture will discuss the main current stylistic trends shaping and live video performances that exist at the moment (from 8-bit to glitch and Camp aesthetics of mash-up and political videointerventsy to generativa and nonlinear narrative Live Cinema).

And Isabelle’s own talk sounds fascinating:

Thinking out loud, or in response to your questions: Semantics and historical review – where the legs grow .. Art as a way of expression and how to make it? As a born and where to apply? Follow the trend and whether it is now fashionable?

Vadim Epstein is a top VJ – who happens to have a background in theoretical physics and 13 years consulting for HP, to boot. Now he makes generative work with code.
http://eps.here.ru 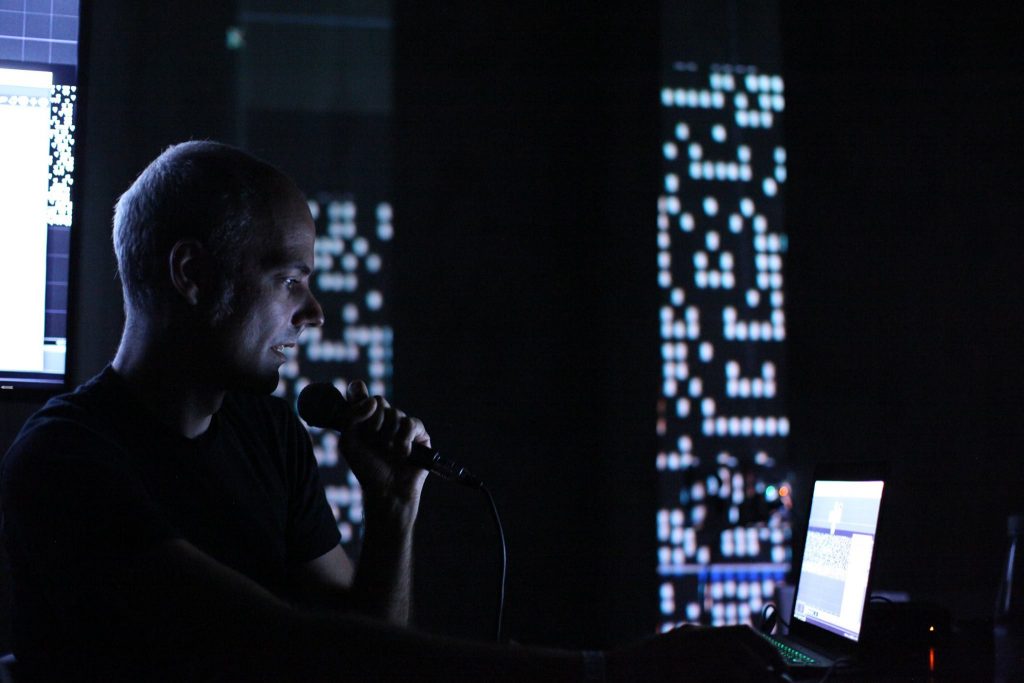 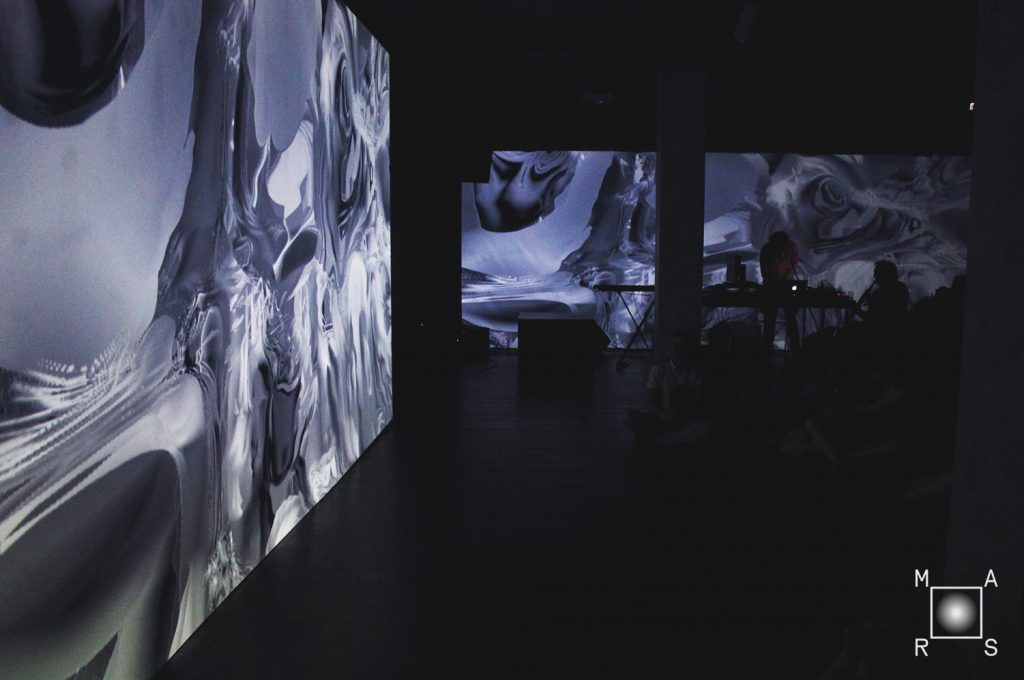 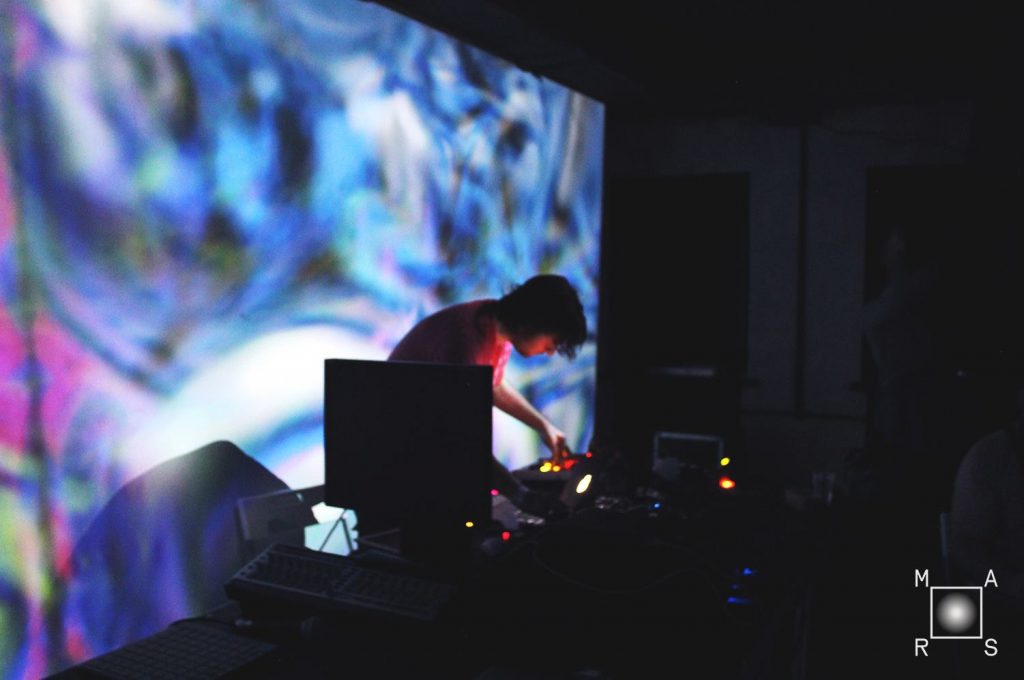 Here’s just a sampling of some of the AV program: 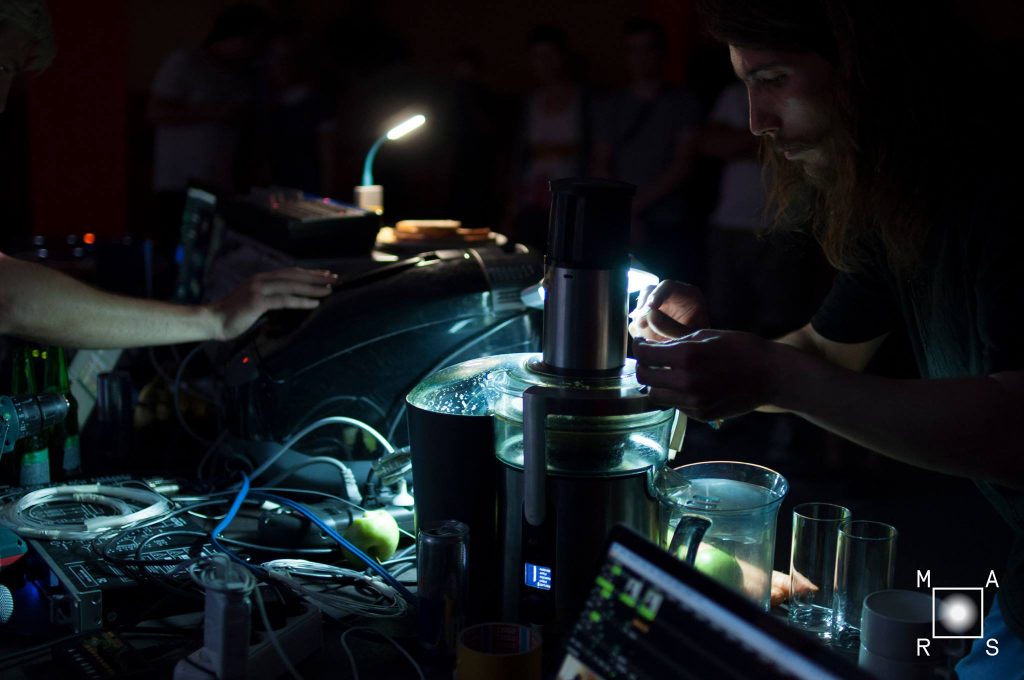 Ildar Yakubov performs live – the same crazy scientist behind the mayhem of the interactive marathon.

ARTRA for MIDI percussion and electronics from akipix on Vimeo.

H/5: for accordion and electronic music from akipix on Vimeo. 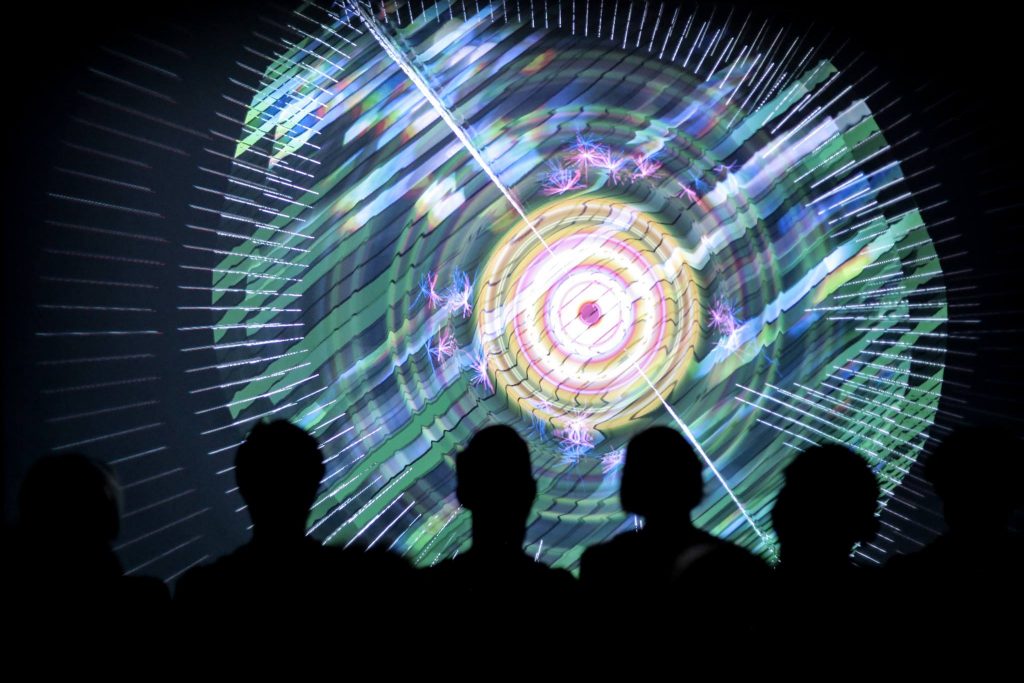 Seems the start of something huge.

And it’s great to be back on Create Digital Motion – as one CDM. Seems just the right moment, as visuals reach a new age.

Here’s how Roland improves upon the original 303 sequencer

Serato’s Ableton Link sync could change how you DJ

Hardware
Bastl – Casper Aikido module is a mixer and a quad VCA and a compressor envelope follower
patching
SynthieCat gives Ableton Live the deep matrix and effects of the 1971 EMS Synthi A
patching
Inflation, begone: SunVox is still donationware, and 2.1 makes it slicker and more powerful
learningpatching
Learn modular MetaSounds in Unreal, free, and start thinking in procedural sound