Surprise, Final Cut Pro could be the MacBook’s killer feature

Here’s an unexpected twist in the plot: Final Cut Pro, the product that perhaps more than any other earned ire from users for not being “pro,” might be the thing that sells you on the Mac.

After all, paper specs don’t matter. It’s really world performance in the software you use that counts. And there, Final Cut Pro is a bit of a champ.

Indie tech reporter / filmmaker Jonathan Morrison has a snappy review that gets to the point.

Now, first, you’ll read a lot of reviews complaining the MacBook Pro isn’t really “Pro.” They mean that literally. Apple inexplicably made a clearly differentiated line, with a 13″ with only two USB-C ports and no Touch Bar, and then 13″ models with USB-C ports, a Touch Bar, and faster graphics. But they didn’t give the low-end model a different name, like MacBook, which means there’s no point to having anything called “Pro” anyway.

More on the models in a moment.

But the important thing in Jonathan’s review is the speed of Final Cut Pro versus Premiere, the other popular choice. His benchmark is just an H.264 render, but that’s exactly the kind of thing you’d notice when you’re up against a deadline – and even with a slower CPU inside, the Mac smokes the PC.

Johnathan isn’t the only one pointing this out. In fact, I’d say Final Cut is generally fast enough that you actually feel the different subjectively. You can toss loads of high-res footage at the software and you’re almost never waiting for a render. For sheer performance, Final Cut and Compressor are a beautiful combination.

That writer is an editor with Trim Editing in London. As he puts it:

First off, It’s really fast. I’ve been using the MacBook Pro with the new version of FCP X and cutting 5k ProRes material all week, it’s buttery smooth. No matter what you think the specs say, the fact is the software and hardware are so well integrated it tears strips off “superior spec’d” Windows counterparts in the real world. This has always been true of Macs.

He also praises Touch Bar support in Final Cut, which is to me definitely a place where it makes lots of sense, since video editing necessarily includes a lot of contextually specific parameters and commands. I can also imagine it’s handy when editing on the go (at least until Apple unveils an external Touch Bar keyboard, which they really ought to do).

This still may not necessarily be a reason to buy the new Macs – but it might be a reason to look at, say, a spec’ed out previous-generation model on sale. And it’s definitely something to consider when comparing Mac and Windows laptops.

Also, what was largely missed in the midst of the hullabaloo over the laptop was a significant update to Final Cut Pro X software. 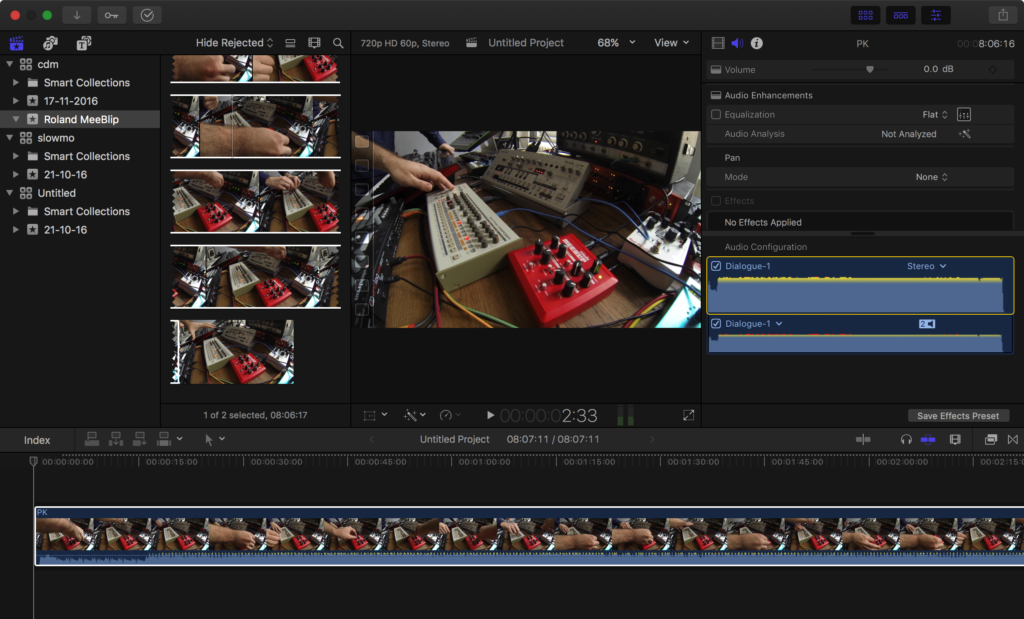 Final Cut Pro X 10.3 is simply the first update in the X series to actually be excited about.

Most noticeably, there’s an all-new look. It’s amazing to me how much of a difference this makes, even if it’s partly psychological. The UI is cleaner, even though structurally it’s the same fundamental UI from the previous Final Cut Pro X. That means more room to work and less of a feeling that the UI is distracting.

Just as importantly as the fact that the UI’s new aesthetics mean more room, you can finally make custom window layouts or hide the Timeline or stick the Timeline on another display. You can also use Thunderbolt to drive an external display.

So, it’s fast, and the UI is nice. That’s little comfort if you just don’t like the way you edit in FCP X (especially if you were an FCP 7 devotee or switched over to Premiere).

But Apple has worked on the Magnetic Timeline, too. First off, I think audio handling in Final Cut is now more enjoyable than any program since Vegas, and that one came from an audio developer. You can use audio “roles” to fluidly view, manage, and edit complex project audio. Roles and color coding are generally expanded.

Deeper down, there are lots of minor improvements that add up to the program feeling more intuitive, including enhancements to the already-terrific multicam support in FCP X.

Parts of the program still feel like iMovie Pro rather than Final Cut, but then Premiere can sometimes go there, too.

I don’t think this will necessarily win you over if you’re more productive editing in Premiere. But I do think that Apple has done a lot to finally address the stuff that annoyed users about Final Cut, and to hammer a lot of quality issues. If you haven’t used Final Cut Pro lately, you really won’t be aware of this stuff.

I still don’t understand why things like video export in QuickTime are hobbled (requiring a trip to Compressor), but I can say there’s at least some reason to use this program.

Also, I’d love to see that dark UI in Logic. Given the new direction of Final Cut, I’m really curious to see where Logic Pro goes next. 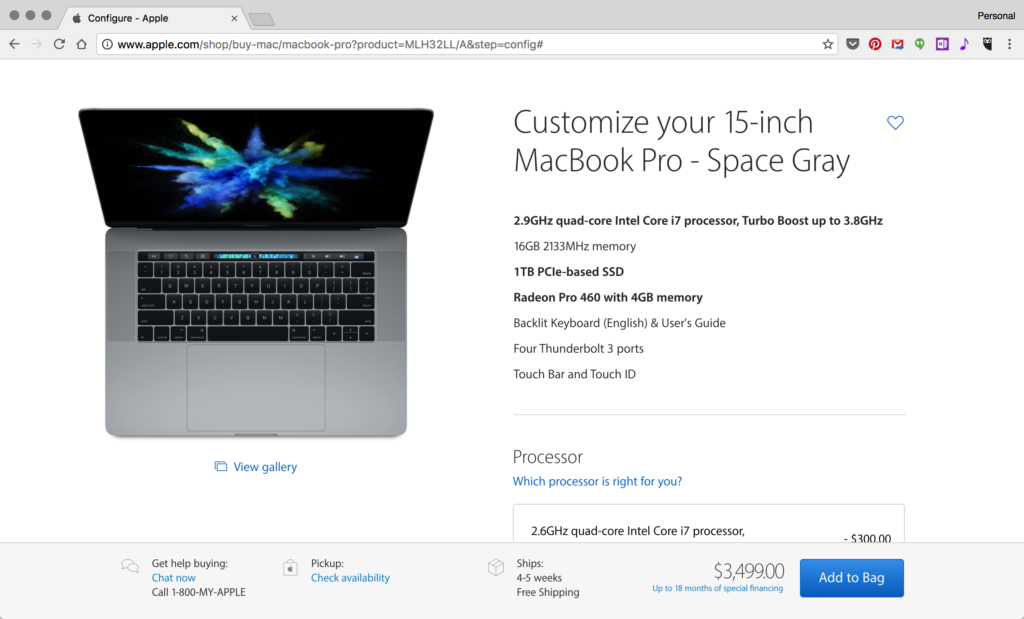 So, back to those MacBooks…

Mostly what that says to me is that people shopping don’t really worry about reviews here. For one, I think a lot of people still just want a Mac. All they needed to know here was that new models had arrived, at last. Also, the complaint from me and other pro users was not that the MacBook Pro was generally deficient, only that it didn’t match our own expectations and needs.

What I will say about the new Mac line – it’s really expensive, even with Apple discounting its adapters.

The basic 13″ model, without the Touch Bar, starts at US$1499 with an anemic 256MB of storage and 8GB of RAM, plus slightly slower graphics, and only a 2GHz dual-core Intel i5. Now, you could certainly dispense with the Touch Bar and just load that model up with RAM and storage, but then you’re stuck with only two Thunderbolt ports. Since one of those is used for power, that’s probably not going to make you very happy.

So, more likely you start with the US$1999 model, which finally gets you 512MB internal storage. Upgrade it to 1TB internal storage and 16GB of RAM and you’re at $2599 for a 13″ dual-core notebook with no dedicated GPU. That’s… pretty crazy.

So, why would you do it? Well, there are certainly some advantages in Apple’s court.

All reviews of the display have been terrific, and it does give you full color.

Those hard drives are best-of-breed fast, faster than what you get in competing models – which partly explains Apple’s higher price. (But that means you do really want to upgrade them to more storage space when you purchase, since otherwise you can’t take much advantage of it working with media.)

The Touch Bar, while a gimmick, does appear to offer some useful customizable shortcuts, though I wish it included haptic feedback when you touch it.

I’ll be honest, though. On a budget, I’d be inclined to get a high-end model of the last generation MacBook Pro – especially if I were using a desktop monitor and not so worried about the improvements to brightness and color gamut.

Also, anyone considering the new models would do well to wait a few months while the accessory situation for USB-C and Thunderbolt becomes clearer. I haven’t heard audio manufacturers certifying these machines yet, and anyone spending this much on a notebook computer will want to avoid any potential compatibility issues.

Early compatibility tests are not encouraging. I think it’s better to wait and get some data on what works reliably – and maybe see if there are driver or OS updates, too.

The reason some of us are looking elsewhere is, this is enough of a price/performance difference to shop around. Windows has done a lot of improvement in the audio side. And on the live visual side, having a GPU is a real advantage. My friend Tarik Bari, for instance, was an early adopter of the apparently now-defunct Mac Pro. It meant the ability to drive high-res visuals. And Tarik is a huge macOS fan. Now, I know even Tarik was frustrated with the latest Mac offerings, as is everyone I talk to who does live visuals. This is probably a niche so small we number in the dozens, but – that’s the nature of the general-purpose PC as a product. It serves lots of tiny niches.

For sheer GPU power, laptops like the Razer Blade give you desktop GPUs in a form factor and price that’s similar to Mac laptops that lack even dedicated GPUs.

I’m eager to try one to see if fan noise is distracting.

Meanwhile, the Dell XPS line is a good tradeoff – modern specs, not quite the latest gaming GPU as the Razer, but well balanced. One of my colleagues has this in the office, and it’s a really fine machine. It’s quiet, it’s fast, the display and build are great, and … oh yeah, it’s dramatically cheaper than the Apple.

Should Adobe just go and make Premiere faster? Yes, please. Imagine what it could do on this fast hardware if given the chance. But meanwhile, with a diverse range of apps, these specs actually should transfer into real-world performance.

Check the spec sheets on any of these – every Mac user I know who has was floored. You get all the new ports (like Thunderbolt 3) without having to give up basic amenities – proof that this isn’t just Apple “looking forward.” And the price is certainly competitive. You can also (cough) go the Hackintosh route with these machines. (Not that I’m supposed to say that, of course.)

Also, I agree with long-time Mac advocates lamenting the loss of the Mac Pro.

So that’s the equation. Apple’s still the high-end option, and still appealing if money is no object. But their offerings are limited to mid-range GPU hardware (charitably), not the latest gear, and the price difference is pretty huge.

The MotherF***** is the DIY delay-reverb box of your nightmares