How much time do producers spend just handling one or two inputs and stereo output (plus monitoring)? My guess is — a lot. Once you’re out of the studio, that amount goes up. But generally speaking, premium interfaces have tended to assume you need more I/O – even though a lot of electronic production now occurs in the box.

So part of the reason the Universal Audio Apollo Twin has been important is that it changes the value equation. It doesn’t do a whole lot of I/O – this is really about recording one thing at a time, listening, and monitoring. But by focusing on that, UA lavished all the expense on that I/O and adding DSP power for its modeled plug-in line. And per jack this is a no-expense-spared proposition.

And it can be perfect for recording one thing at a time, while also outputting up to four discrete channels (meaning live four-channel applications work).

I thought it was a significant entry when it came out for this reason, and that suspicion has been born out by two things – one, I personally can’t live without it in my own productions and my colleagues, and more importantly, I see a heck of a lot of these things popping up. 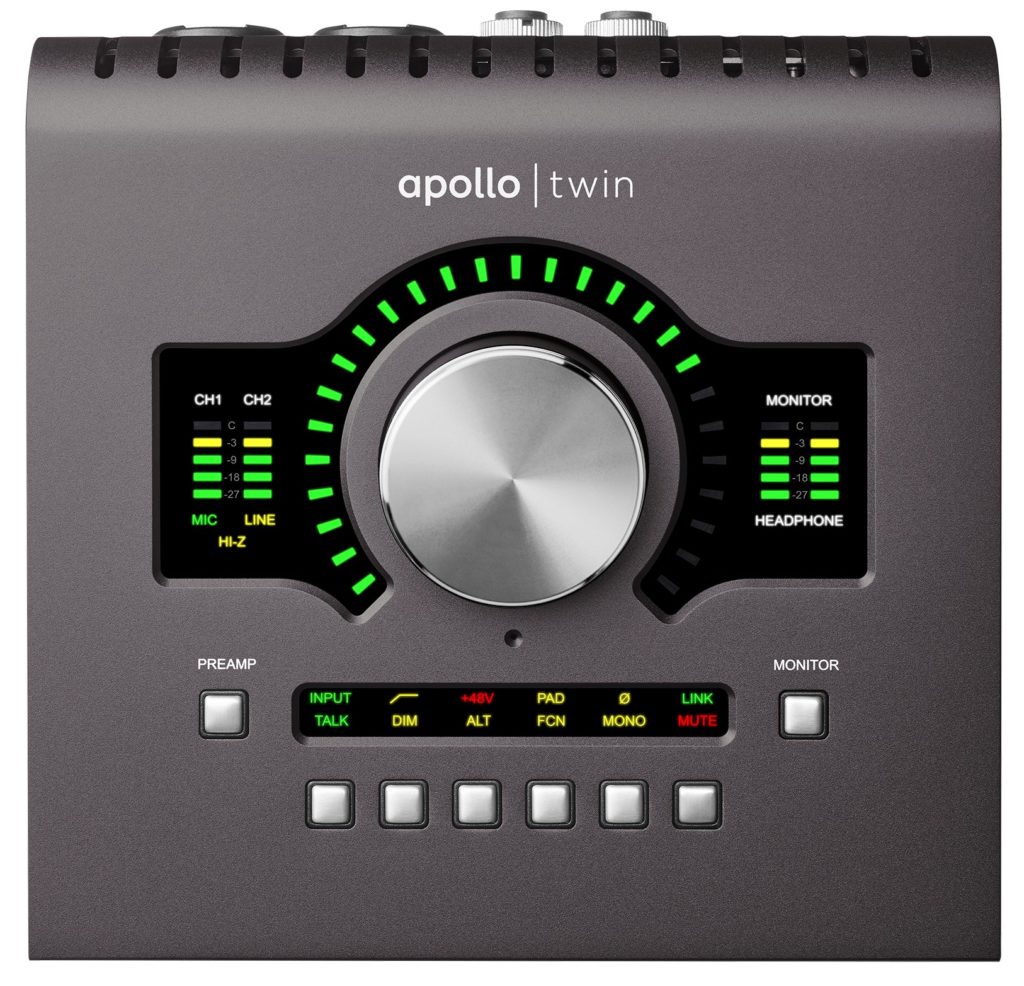 Let’s be honest: UA most certainly hope this thing is a gateway drug to get you hooked on their plug-in line. And those plug-ins, while terrific, don’t come cheap – they’re at least in line with a handful of other high-end software makers. But I might even go as far as recommending the model with the low-end DSP, because I think the driver and hardware quality of this box is unparalleled.

Or, that is to say, it was already unparalleled, and UA now promise it’s gotten better. The MkII is a “ground up” hardware redesign that promises greater audio quality, much-needed monitoring additions, and the option of getting QUAD processing if you need the DSP horsepower.

UA already addressed one of my biggest complaints – one that had us occasionally shouting expletives at Universal Audio. There’s now a unified driver model, so that you can swap different UA interfaces. That was essential to me and a colleague of mine, as we wanted to use a multi-port interface in the studio and the Twin on the go. That’s sorted, so now swapping is easy.

Being operating system agnostic is also totally possible – whereas Windows users were initially left out entirely, and then Windows and Mac required different drivers and interfaces, now you can swap hardware and OS as you please. That’s also I think a big deal, as some of us have (cough) decided to take the plunge and add a PC to our arsenal.

The MkII looks basically like the earlier model, apart from a Space Gray-styled darker color. The big change are in the innards:

More monitoring, talkback. These offerings were a little basic on the first generation. Now, you get mute, DIM, mono, and ALT speaker switching. That’s clearly useful for studio and recording applications, but I think it has probably a too-often ignored utility in live situations.

Now there’s a quad option. If you don’t care much about DSP or just need an occasional UA plug-in, there’s still the US$699 SOLO model. If you use DSP, though, you really want the $899 DUO. I’ve found that was more than enough for my needs most of the time, personally, but I have spent some time bouncing out tracks as a result. If you’re really into the UA ecosystem, there’s now also the QUAD model with extra DSP.

Mac, Windows. This is now true of the whole Apollo range (with the exception of the Windows-only Apollo Twin USB), but worth mentioning again – you don’t have to choose different hardware just to use both operating systems. You need Thunderbolt, but that’s becoming standard on serious current-generation Windows machines. 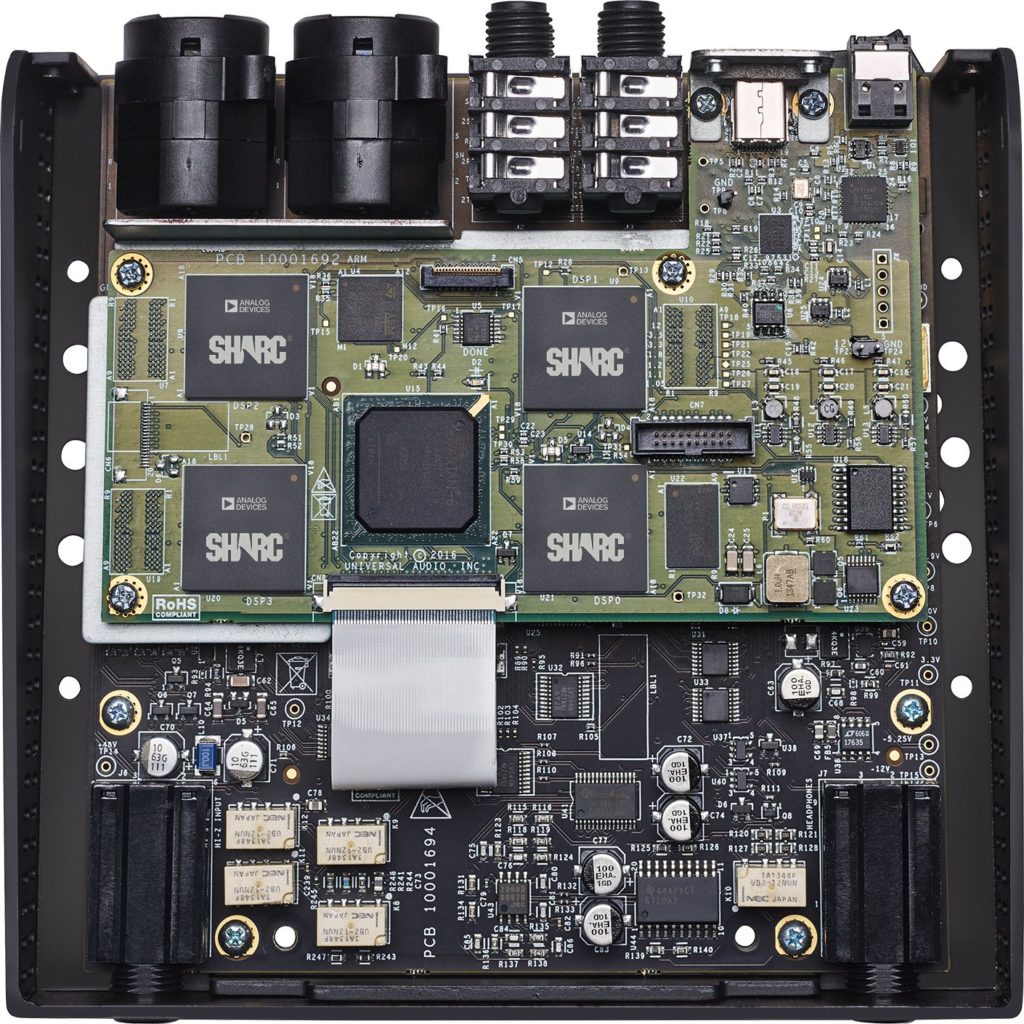 QUAD version of the Apollo Twin – those things labeled SHARC are the chips doing the heavy DSP lifting.

Unless you really want the QUAD, I think this mostly sweetens the pot for would-be new adopters rather than makes a must-have upgrade for existing users. That also means you might keep an eye out for used first-gen units. (That said, though, you can chain units together with Thunderbolt.)

But as before, UA justify their use of DSP hardware with tight software/hardware integration and high performance. The includes their Unison technology, which coordinates the preamps and gain with software models, so that the modeled preamps, guitar amps, stompboxes and whatnot can behave like the original in terms of impedance, gain stage behavior, and sound. The big deal, though, is that you can use these software models with near-zero latency, giving you the feeling of having the actual hardware when you’re recording or playing live. And that for me is what justifies using DSP hardware and not just native plug-ins.

These also still come with a set of entry-level plug-ins in a bundle, including some nice Softube amps and distortion, an excellent tube preamp model, and then some still-pretty-darned-good “legacy” models from their back catalog.

Yeah, there are some other options in this price range, like the RME. But at the moment, I can’t quite top the UA, at least for macOS and Windows, if you want the best possible box with this I/O configuration. 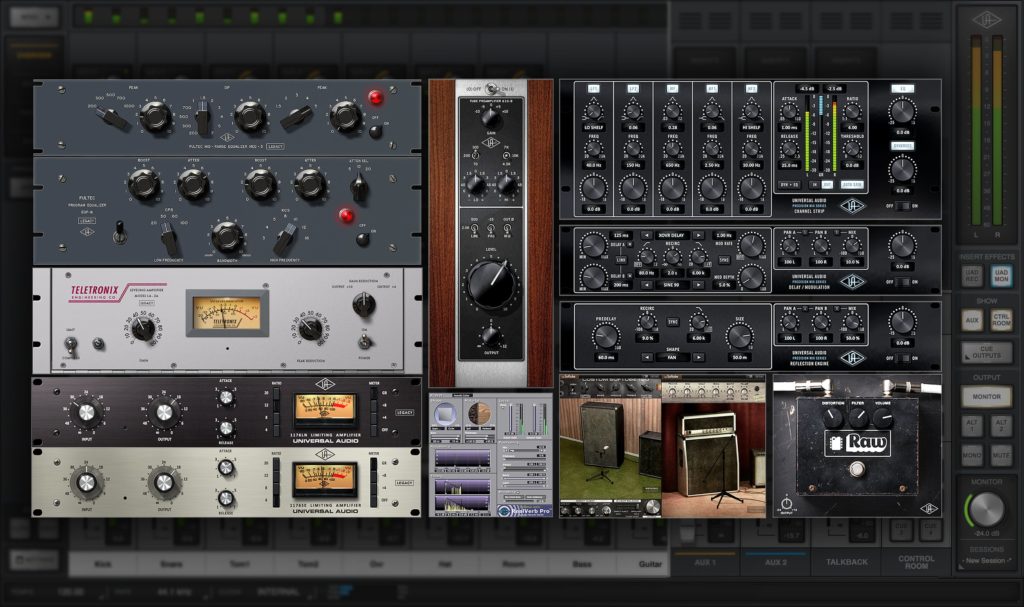 The other good news this month for fans of the Universal Audio ecosystem is the announcement of support from Softube on their Console 1 hardware. The Console 1’s price was also dropped to US$499, which is a lot more in the league of what we think of when we think control surface. And that really fills in a missing piece. It’s great to have this UAD software, but it’s slightly miserable to have to dig into software with the mouse just to turn a knob. It doesn’t matter how good the sound experience of the original hardware is if you can’t get control in your hands.

The Console 1 and Apollo Twin as a combination, though, make a pretty ideal studio and mobile setup. Not all the UAD stuff is covered – and this requires using Softube’s software host, not the UA Console. But most of the stuff you’d likely use is covered, and I suspect not having to go into the UA Console makes more sense for workflow, anyway.

Watch for more on these solutions – and we’ll see if I can defend my enthusiasm for them.

Hardware
Faded Instruments has a line of candy-colored 1U tools – easy modular stocking stuffers
HardwareMacWindows
The best Cyber Monday deals you can get now on synths, plug-ins, and more
MacMacOSWindows
MadMapper 5.2 is here, with more lasers! (and DMX CSV, Xbox controllers, and Kinect)
productionrecording
SAND hosts your iOS plug-ins, sequences them with patterns, records them