It’s not an exaggeration to say that Tatsuya Takahasi and his team at KORG has changed the face of the modern synth industry.

And I can even say that literally. “Tats” has become a household name in the international synth community in a way no other Japanese engineer, designer, or leader has. (Compare, for instance, Hiroaki Nishijima, creator of the MS-20 – a name people rarely know as readily as they do the synth.) Korg products are still the work of big teams, like any large maker, but Tatsuya has been a public figure, outspoken and eloquent in the description of the instruments he’s created and the philosophy behind them. (Perhaps his Western upbringing has mattered, too – Tatsuya spent a lot of his formative years in London and speaks English as if it’s a first language.)

That in itself is important, but even more so is the direction Tatsuya and KORG have taken with making synths more accessible, popular, and influential.

Ask a few years ago what would have the biggest impact on synthesis reaching new audiences, and I’ll bet a lot of people would have pointed to mobile apps. Instead, in his role leading design and engineering for analog synths, Tats made synth hardware the democratizing force. I think you could even go as far as saying that hardware, more than apps, has been what has most impacted the culture of music making in recent years and inspired the greatest passion in the present generation of electronic musicians. 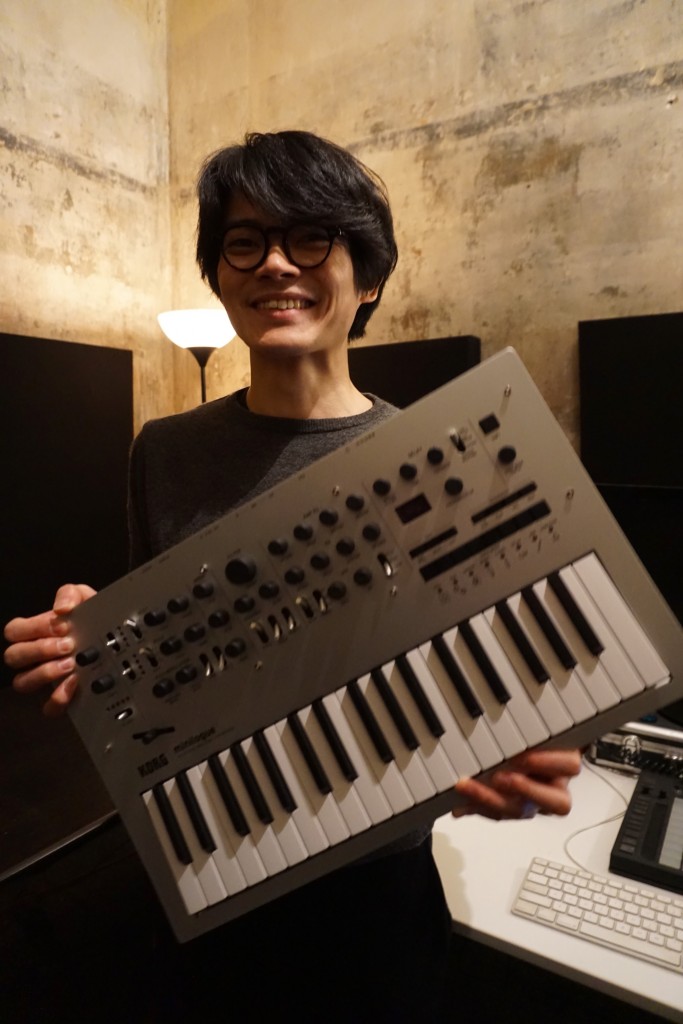 Tatsuya visiting my studio last year with his (then-new) Minilogue, which I think is one of the best synths in recent years.

The long string of synth gear launches Tats has overseen has some clear themes. These are instruments that are fun to play with, offer lots of hands-on control, and typically feature battery power and portability. And what a roll he’s been on: the monotron (monosyth), monotribe (drum machine), volca series (synthesizers and drum machines), and most recently minilogue polysynth and its follow-up the monophonic monologue were all projects he led. He’s also been behind the analog reissues of the MS-20 and ARP Odyssey ad the SQ-1 sequencer. And he did the littleBits synth kit in collaboration with littleBits.

Tats talks about his populist philosophy in his public letter on Facebook (below, in case you haven’t read it already). But it’s worth noting just how far this realm has come. 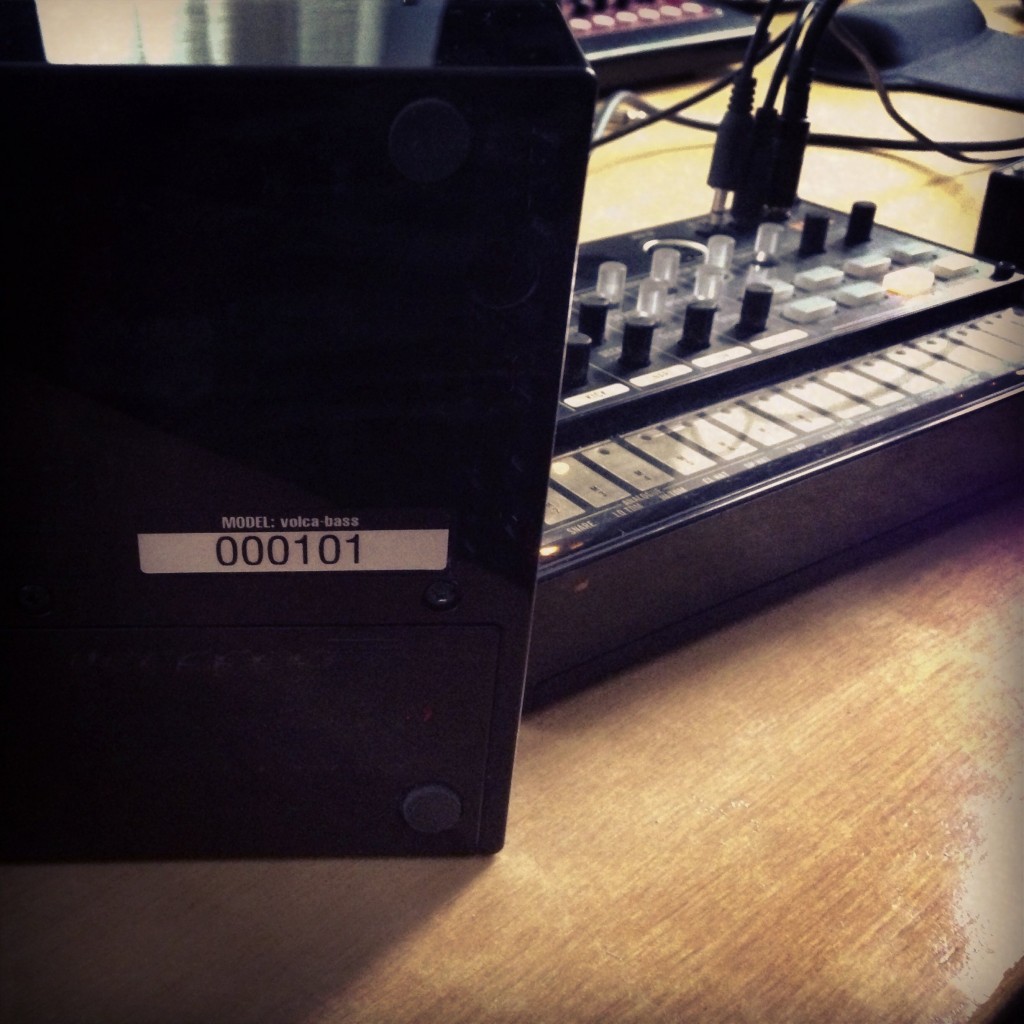 Serial number 101 = the first serial number for volca, ever. No, we don’t get to keep it. This is the unit Tatsuya himself was carrying around.

Making synths in this way really has transformed music. When a synth costs under $200 (like the volca series) or even under $100 (like the monotron), there’s a vastly larger segment of the population that can afford it. This isn’t a question of quality; there are some people who simply don’t have the disposable income to invest in a pricier instrument.

Reducing the price also telegraphs that this is something you can play with, something open to experimentation. It begs you to relate to the object differently on an emotional level. And actually, I think music benefits when you imagine a toy and all the freedom that implies, rather than a tool. An inexpensive synth is something you can try without saying something like, “hey Mom, hey Dad, I’m enrolling in ten years at the music academy, will you buy me a ‘cello?”

Singing has that kind of accessibility. Folk instruments can be handed down, like a mandolin, and have a similar emotional relationship. But synthesizers risk becoming the domain of people with extra cash and with an already established love of the field. When we say “too snobby,” we mean literally that an instrument becomes an expression of class. And I don’t think that’s something this world needs more of at the moment.

I have a personal connection to that saga, because it’s a story that has followed CDM, too. And that message came from people who read this site. Before KORG released the monotron, readers were already devising cheap DIY solutions to produce their own portable, cheap synths. Readers were telling me how important these values were to them, before KORG responded with a product with those values. Then Canadian engineer James Grahame started talking to me about the inexpensive, portable digital monosynth he wanted to produce. We had already started on schematics when the first monotron arrived on the scene – and instantly recognized that it embodied a lot of the philosophy we had talked about.

But that was really an important moment. Big companies – any big companies, even in electronic music – don’t tend to move quickly. So to see an individual bring this kind of new philosophy to one of the so-called Japanese “big three” was a revelation. Here was someone who “gets” it. And Tats and his team have continued to deliver hit after hit after hit. This has benefited our community twice over. One, KORG have a scale, technical competence, and distribution and marketing apparatus that smaller makers can never match, which means these products can reach a wider array of people worldwide. Two, there’s been the significance of having that resonance in a larger maker – it validates this populist agenda and even sets a standard for those of us who don’t have our own factories at our disposal.

Moreover, Tatsuya has helped lead the resurgent interest in analog synthesis, much in the way that Lomography has rejuvenated film photography.

It’s also redefined what’s important about analog and hardware, which is not so much the analog circuitry itself as hands-on control and simplicity – stuff that’s fun to play. So you can see KORG’s mark not only on new analog stuff from some of its competitors, but also on the (digital) AIRA and Boutique series reissues from Roland, and Yamaha’s Reface keyboards.

And I think KORG’s leadership has also helped all the other synth boats rise, too. Tats’ commitment to openness – releasing filter schematics and hackable boards, and working on the littleBits as an educational tool – has aided other boutique DIY makers (like us, for sure). KORG were the first major maker to embrace open source hardware licensing for one of their products, after some of us did it in much smaller enterprises.

For KORG’s part, it’s clear that this spirit won’t depart alongside Tatsuya. He promises in his letter to remain in an advisory role. And I think he’s taught the whole organization a lesson in what’s possible and commercially viable – indeed, all of us.

You can also bet that some less publicly-visible people at KORG will carry on his new spirit and dream up some new ideas. Tatsuya leads a team, but – there is actually a team there. So while he’s been the public spokesperson for a lot of these ideas, design and engineering comes from a team. That means comparisons to Les Paul or even Dave Smith, as I’ve seen elsewhere, misunderstand how product creation works somewhere like KORG. And figuring out who will carry the torch – if perhaps a bit more quietly or less publicly – will be something I’m sure we’ll all be trying to suss out. But it is important to note that these are team efforts. That’s not to take away from Tatsuya’s talents – far from it; I think it’s harder to drive clear product focus with big teams and large scale.

Some of those individuals have gotten exposure, albeit only in Japanese. See Yoshihito Yamada (monologue and minilogue), Tatsuya Okamoto (also on that team, plays with Yoshihito), Tatsuya Okamoto (sound design, see also this story), Yuki Ohta (also interviewed by Attack), and ARP Odyssey engineerJunichi Ikeuchi. But this also speaks to the new synth industry: whereas back in the day you could point more readily to one engineer or designer, synth creation is now often about management, as more collaborative team effort builds the instrument.

Looking beyond KORG, though, I think it’s inspiring to read Tats’ email partly because there’s a lot more to do. If we really want to make synthesizers more accessible, if we want to make them work in education, if we want them to reach more people including those who lack the financial resources of our main market, if we want to be socially responsible instrument makers and musicians, we’re only getting started. And I think there’s a role not just for big players like KORG, but also all of you one-person and two-person shops making modules and kits and weird inventions. All of you CDMers, that is.

Tatsuya is moving to my country of residence Germany. I have no idea what he’s working on next when he says he will “explore new areas where sound and technology can have positive social implications.” He does assure us that’s not in this industry. But I wish him the best – and hope we all meet in Köln or Berlin soon, as this country is home to ever more inventors. I can’t wait to see what the next chapter will be. 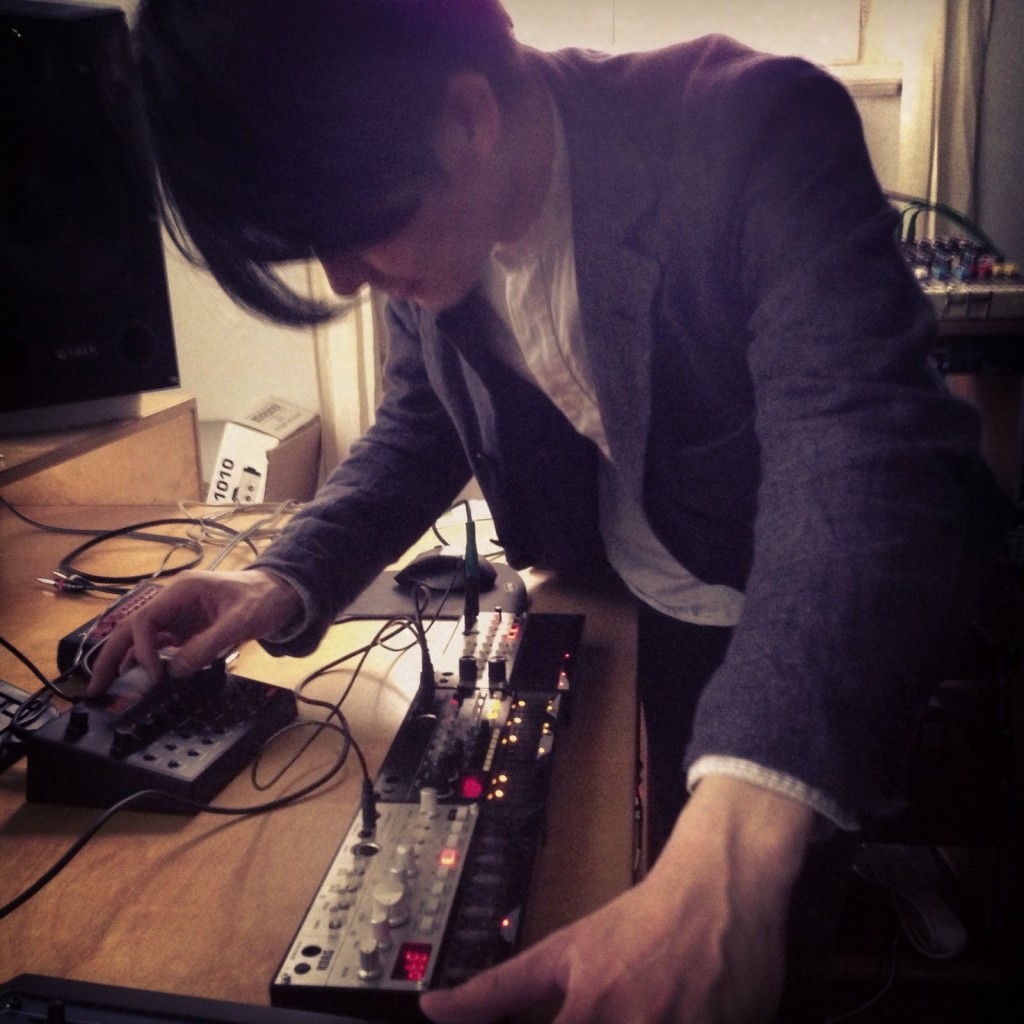 Korg’s Tatsuya Takahashi stops by our studio, playing his volcas (and a bit of MeeBlip with us, too!)

THANK YOU!!!
It’s been a good ten years at Korg!

A few years after starting at the office, Tada and I, over a cigarette break, started shooting ideas around for a battery powered pocket analog synth. The monotron was the humble beginnings of what became a mission to make synthesizers fun, exciting and accessible again. To give synthesizers back to the people. To make synthesizers less snobby. To open up creative opportunities. To get people interested in electronic sound and see some kind of light in creating their own sound using technology amidst a world that is inundated with it.

After a blur of 21 products we released over seven years, I look at the world of synthesizers and it’s a pretty cool place. I see kids getting their first taste of synths with the volcas. I meet people who have their dormant synth passion rekindled by the minilogue. And it’s not just Korg. The whole industry has set out to achieve this common goal.

The name volca comes from the German word Volk: “the people” or “crowd”. Like Volkswagen “the people’s car”, the volcas are “the people’s synth”. I have fond memories of meeting Mike Banks and being told how the volcas reached poverty-stricken youths in Detroit. That manufacturers have to take responsibility for the social implications of putting out gear.

On the 17th of February I will be leaving my full time position at Korg and will sidestep to advisor. I will also be moving out of Tokyo to Cologne to explore new areas where sound and technology can have positive social implications. I won’t be going to any of the competition, but rather will be shifting direction of my main line of work while at the same time guiding the now super team at Korg venture into the future.

I am hugely indebted to everyone in engineering (my super duper team will keep designing the best of the best), production (love you all in Vietnam we did this together!), sales (job well done), marketing (fun times making those movies), distribution / dealers (essential work the world over), media (you guys got the word out) and most of all the musicians out there who are creating music with our synths – without you our work is meaningless.

it’s been a ton of fun. more to come.