What does it mean that NI bought a startup that monetizes remixes?

Native Instruments announced an acquisition that suggests a new area of intended growth for the company. They’ve acquired MetaPop, a firm that clears and monetizes remixes – and with the company, they also get the former CEO of Beatport. To work out what that might mean, you need to first understand MetaPop.

It’s safe to say remix culture isn’t what some predicted it would be. Instead of ushering in a bold new age where music is re-imagined by fans and artists find new opportunities to share ideas and earn money to support their art, we get — uh, takedown notices. And a lot of non-starters.

Into that somewhat desolate landscape, enter MetaPop. The startup was born at the start of 2015 in Los Angeles, founded by former Beatport CEO Matthew Adell. (Adell sold Beatport to SFX, though … that turns out to be an unpleasant story. It appears meanwhile MetaPop has only undisclosed seed money behind it – though that could be actually a good sign, in that acquisition could help it grow.)

Basically, the idea of MetaPop is to actively support fans making remixes, and squeeze revenue out of unlicensed remixes that are floating around online. When you just play music – as in a DJ mix or an online streaming service – you are required to pay a compulsory license, or a fixed license fee that is supposed to pay money back to the artist. That’s another discussion, but suffice to say even the US Commerce Department thinks that that license structure doesn’t make sense for remixes. (I will refrain from using the word “mash-up,” as I think it’s dead, like “information superhighway.”)

So MetaPop does two things. First, it actively courts remixes. There’s a marketplace of pre-cleared stems, where you can go and download stems for free and make your own remixes. There are promoted contests, too, like a recent one with Carl Craig. They’ll even host a remix contest for you for free.

Second, MetaPop supports labels and artists by searching for unlicensed remixes and monetizing them.

You can read Adell’s thoughts on this as CEO, as he speaks to Bas Grasmayer:
Monetizing remix culture: Beatport’s former CEO about his new mission 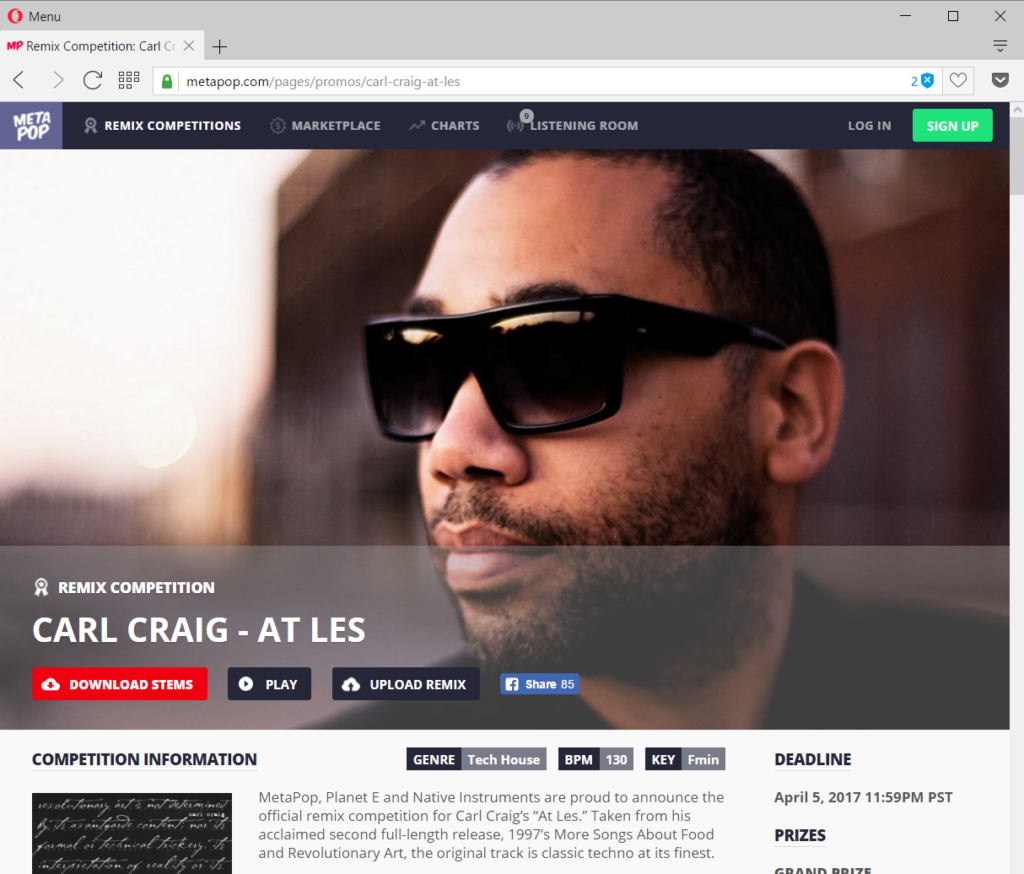 Now, it’s pretty easy to follow why Native Instruments might be interested in such a company. We’ve already seen that part of the company’s vision for the future of DJing is live remixing content with STEMS. MetaPop is literally a source of stems, if you want to look narrowly at what that might mean. But apart from remixable content on MetaPop being potential STEMS fodder for Traktor users, more broadly it seems to align with Native Instruments management’s idea about where DJing and electronic music are going.

I wouldn’t look at this as “what NI plans to do with STEMS, though.” It seems to me that NI are primarily acquiring Matthew Adell – and they’re not being secretive about that.

He’ll stay on in NI’s LA office. That office is now up to 50 people.

To his credit, I think he built a great business with Beatport. In fact, it’s hard to imagine the producer community without Beatport — for so many genres and labels, it’s a principle source of attention and revenue and has kept a lot of music going. (Service like Bandcamp have their own value, but they don’t always overlap. Heck, even Traxsource and Beatport don’t always overlap, and they’re covering similar genres.)

Let me break from script here, though, and say, quite frankly, I have some real questions and reservations about this direction.

The principle potential here for electronic music as service and remixing as medium is all on the DJ side. And Native Instruments has got to get their DJ offerings in better shape to remain competitive.

TRAKTOR is complicated, and subject to instability depending on the computer hardware it runs on. Then, some of its differentiation points are starting to look more like vulnerabilities. Sure, you can use elaborate NI controller hardware – but you’ve got to compete with a competitor who can tell you to just “carry a USB stick.” Then there’s the concept of doing live remixing with STEMS. I still like STEMS as an idea – I’ve released my own content on the format, other artists’ content, and I’ve used it and found it to be musically useful. But Native Instruments rolled out STEMS as a “standard” and has since utterly failed to bring on any major developers or vendor partners, or even to integrate it in their own production products (like Maschine). To me, it’s a great idea – but one that’s had next to no follow through, internally or externally. I say all of this as a TRAKTOR user.

And let’s get real. This market has gone back to selling, buying, and playing vinyl records. That’s how devoted it is to reliability, tradition, and physical hardware.

I don’t doubt for a second that there are real opportunities in online offerings, too. Indeed, Adell identified some of those problems with MetaPop. Just getting music out and getting it in the hands of DJs (and remixers, if you like) is already a huge challenge to producers. That impacts NI products outside of just DJing, too – if you can’t get music heard, then you’re less likely to want to buy production tools. Solving these problems could well be valuable.

But this is the challenge Native Instruments faces. Whatever they do with digital offerings, I think they’re going to live and die based on hardware, because hardware is what we’re investing in. (Ask that competitive Japanese company that makes giant MP3 players that cost about as much as a used car.)

Sure, that may be an odd thing to say to the company that made its fortune by going to software. But look at it the other way round: NI has grown at each stage of life based on correctly recognizing trends. That includes the value of software development, then the potential of digital DJing and digital vinyl, then the combination of controller hardware with software.

They may well have it right by identifying online offerings as part of the next trend. But I think the thing to watch is whether that can work in tandem with a more robust offering for DJs, up against increasingly dominant competition.

Of course, that’s what keeps working in this business fun – it’s neither easy nor simple, and it connects directly to people’s most passionate feelings about music at a time when how music is made and heard is changing. So, as always, we’ll be watching.

A bunch of tricks and tools for generative visual tool TouchDesigner