This looks like a near-perfect platform for learning synthesis with Arduino – and it’s just US$30 (with an even-lower $25 target price).

It’s called ArduTouch, a new Arduino-compatible music synth kit. It’s fully open source – everything you need to put this together is available on GitHub. And it’s the work of Mitch Altman, something of a celebrity in DIY/maker circles.

Mitch is the clever inventor of the TV B-Gone – an IR blaster that lets you terminate TV power in places like airport lounges – plus brainwave-tickling gear like the Neurodreamer and Trip Glasses. (See his Cornfield Electronics manufacturer.) Indeed, some ten years ago when CDM hosted its first MusicMakers / Handmade Music event in New York, Mitch happened to be in town and put us all in a pleasant, totally drug-free trance state with his glasses. He’s also a music fan, though, so it’s great to see him get back into music synthesis.

And ArduTouch is hugely clever. It’s an Arduino clone, but instead of just some headers and pins for connecting wires (boring), it also adds a PCB touch keyboard for playing notes, some extra buttons and pots so you can control sounds, and an all-important amp and speaker, so you can hear the results on just the board. (You’ll obviously want to plug into extra gear for more power and loudness.)

You don’t have to code. Just put this together, and you can start making music.

That’s already pretty cool, but the real magic comes in the form of two additional ingredients:

Software. ArduTouch is a new library that enables the synthesis capabilities of the board. This means you can also customize synth functionality (like adding additional control or modifying the sound), or create your own synths.

Tutorials. When you want to go deeper, the other side of this is a set of documentation to teach you the basics of DSP (digital signal processing) using the board and library.

In other words, what you’ve got is an all-hardware course on DSP coding, on a $30 board. And that’s just fabulous. I’ve always thought working on a low-level with hardware is a great way to get into the basics, especially for those with no previous coding background.

Looks like I’ve got a summer project. Stay tuned. And thanks, Mitch!

This obviously needs videos and sound samples and the like so — guess we should get on that! 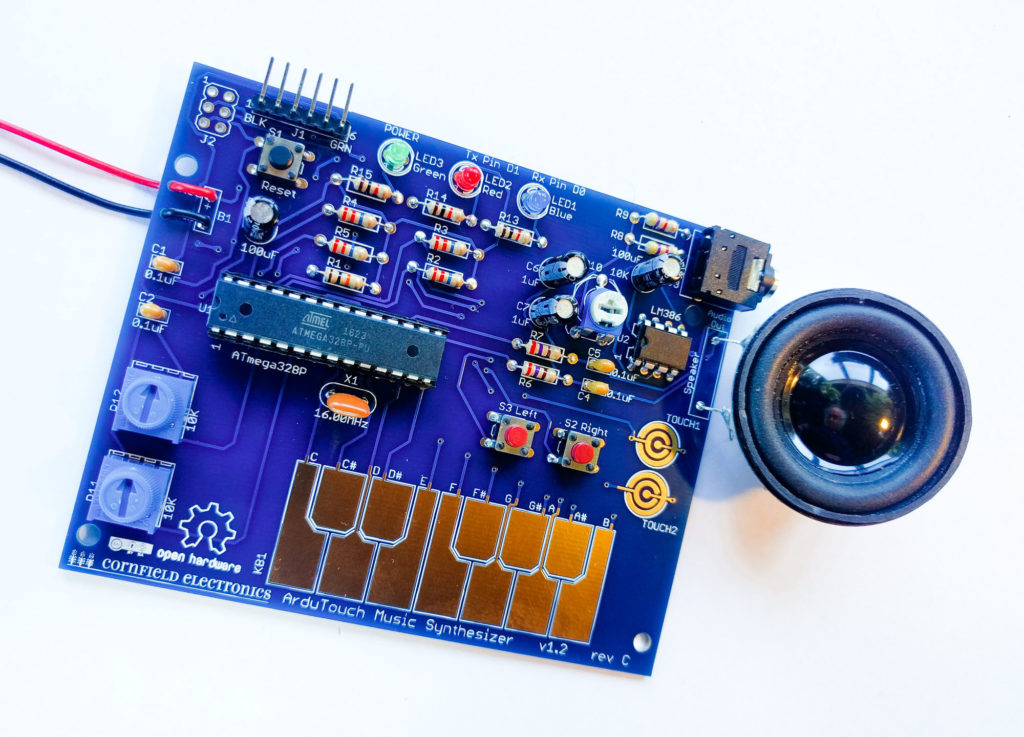 In the meantime, though, here’s Mitch with some great inspiration on what hacking and making is about. Mitch is uncommonly good at teaching and explaining and generally being a leader for all kinds of people worldwide. Have a look:

He also walks people through the hackerspace movement and where it came from – especially meaningful to us, as the hacklabs and knowledge transfer projects we host are rooted directly in this legacy (including via Mitch’s own contributions). This talk is really must-watch, as it’s one of the best explanations I’ve seen on what this is about and how to make it work:

Don’t know how to solder? Mitch has you covered:

And for a how-to that’s equally important, Mitch talks about how to do what you love:

Hardware
Family-owned Auratone win defense of their trademark in Music Tribe / Behringer case
ElectronicsHardware
The Insolventunclesam is a synth about printing money, by Gijs Gieskes
arduinoDIYElectronicsHardware
Make a DIY velocity-sensitive e-drum kit with Brian Bamanya aka Afrorack
DIYElectronics
CHAIR made an amazingly realistic snare plug-in – get a CDM discount, then play it on a table
We use cookies and other tracking technologies to improve your browsing experience on our site, show personalized content and targeted ads, analyze site traffic, and understand where our audience is coming from. By choosing I Accept, you consent to our use of cookies and other tracking technologies. Please read our Privacy Policy.