Here are two quick takeaways about the TORAIZ AS-1 monosynth introduced by Pioneer DJ, in collaboration with Dave Smith. One, it sounds great – but we figured that, given it’s basically a single voice from Dave Smith’s Prophet-6. Two, it’s got a surprisingly powerful sequencer/arpeggiator, with some extras like alternative tunings.

And it’s that second point that matters. If you just want to add bass lines to a DJ set, Pioneer has some competition. Roland can sell you not one but two different variations of the classic 303 – either the AIRA TB-3, or the Boutique Series TB-03. As many observed, the AS-1 even looks a whole lot like the AIRA, down to the touchscreen.

For that reason, I think it’s not enough just to buy a Pioneer AS-1 on the basis of its Dave Smith sounds. You need more.

I’m meeting with Pioneer later this week at Musikmesse for a closer look at the AS-1, so I thought I’d put out this hands-on now to see if y’all have any questions for them. The folks at soundrope have done an insanely video hands-on. It’s narrated in Japanese, but it won’t matter – you can follow the demo easily. (As usual, hearing Japanese voice over just makes everything seem better. If you want to be thoroughly confused, turn auto-translation on. We’re not at Babelfish level quite yet) 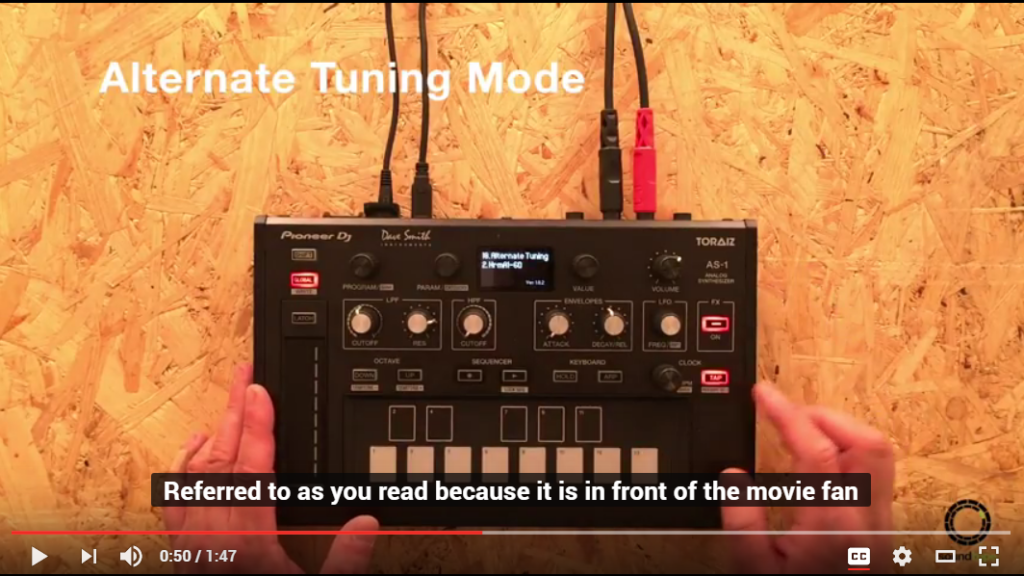 Through the power of computers, we don’t even need to learn foreign languages any more! Uh… actually, wait, maybe we do.

To me, though, what’s nice is the workflow on sequence creation, arpeggiator, and adding alternative tunings – plus the added power of having a complete effects section. You can see those below.

I’m finishing a review of the companion TORAIZ SP-16, but that’s a bit on the pricey side. If the AS-1 has the same solid build feel of the SP-16, it could be a real winner. , but then having a balanced monosynth here is terrific – and even though it says Pioneer on the front panel, this could wind up being the best Dave Smith monosynth we’ve seen in some years. Major correction: this doesn’t sync to the CDJ line. There’s no support for Pioneer’s Link protocol on the CDJ.

So, have a look, and let me know what else you’d want to know about it. Hopefully we can also rig up some DJ hybrid setups via the CDJ in coming weeks, too.

Here are those videos:

Scale mode isn’t a terribly new idea, but with switchable scales does a decent job of cramming melodic playing (and curves) into a small space (sorry, more Japanese talking here):

Alternative tuning looks especially interesting; I’m curious if you can load other tunings via the editor:

Quick access to programs and transposition are both useful live:

The effects section is really nice, as well, though now we’re potentially deep into prog rock / ambient / Tangerine Dream territory rather than DJ stuff (not that that’s a bad thing):

What I didn’t expect was a copious editor, including a sequencer, but you get that, too:

And here’s a nice demo with Ableton Live:

And if for some reason you wanted a listen to every single sound in the factory bank, well, SYNTH ANATOMY have you covered for the next 20-odd minutes:

Official site. Hey, what do you notice about this URL? Are we getting one in white? Chrome? Pink? Camo? (I think KORG shipped each of those at one point.)

Correction: It seems Pioneer is not adding Pioneer Link support, for plug-and-play sync with the CDJ and so on. That’s too bad – ideally, it would seem Pioneer would standardize on its own proprietary DJ LINK protocol, or else put MIDI on its CDJs, or else support Ableton Link. Here, it’s doing none of those – acceptable for a synth, but not something that integrates with Pioneer’s DJ products. CDM regrets the error (and will ask Pioneer about this, naturally.)

Hardware
Go listen to this podcast about HBO’s epic sounds – and stick around for some retro visuals, too
analog
Celebrate Eliane Radigue at 90 with a free documentary and fresh, radical re-releases
synths
SunVox 2.0: the nearly-free modular pocket DAW just got a slew of new features
Hardwarepreviews
Type in lyrics, and this keyboard sings them, as Casio returns to its Casiotone roots