Musical ritual has long been tied to the magic of the skies. So it’s fitting today’s total solar eclipse will be set to sound.

A huge swath of North America will today see our sun obscured by the moon, in a rare total eclipse. And of course, that means it’ll be met by one of the world’s big space agencies and a global Internet viewing audience – as this is the first major eclipse like this to happen in the age of global social media.

NASA has everything you need to catch up with the event, including maps (with weather and traffic), safety information, and a live stream. (I’ll be watching on the Internet from Berlin; don’t know about you):

But while the eclipse itself is seen, not heard, that isn’t stopping people from mounting musical responses. Perhaps the most interesting is a sonification project with Kronos String Quartet and Exploratorium, who will transform the eclipse event into live music. (“Maybe ‘musify’ is as good a word as ‘sonify.’)

While light is a wave as well as a particle, it isn’t an audible wave. But just as you can create a viewable picture from visual information, you can also make an equally valid ‘picture’ with sound and music. The team begins with a digital image from a telescope in Caspar, Wyoming. In the Exploratorium in San Francisco, a Max/Jitter patch will analyze the image and produce sound. The string quartet will play along.

That is, this is sound and music made from the same image we’ll be watching from Wyoming with NASA. Here’s an explanation of the process:

Grim has pre-baked part of the music, organizing samples from the quartet into a colorful score with 23 cells that looks more like a collage than your standard staff notation. There aren’t any specific instructions; it’s a kind of road map to follow as the eclipse proceeds.

This is Grim’s initial collaboration with Kronos, but it isn’t his first time with “sonification.” He created musical evocations of the 2012 transit of Venus and last year’s total solar eclipse in Micronesia.

The Sun, The Moon And A String Quartet: Kronos Plays Live To The Solar Eclipse

It sounds like it’ll be really cool. We’ll watch here – and listen:

There’s more. The folks at NASA have compiled a pretty funny musical playlist, ranging from obvious choices like Pink Floyd and Bonnie Tyler, to more obscure choices (like a 19th century polka, part of the compilation pictured here): 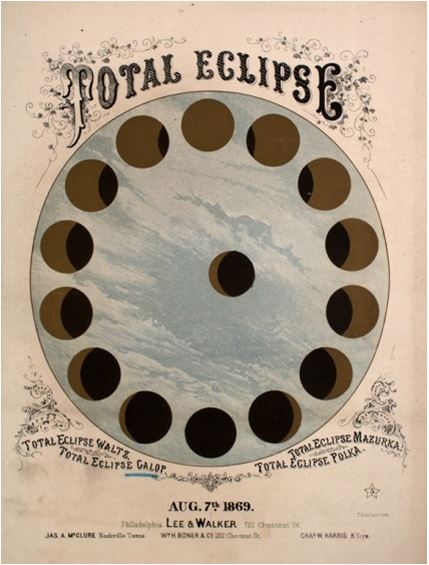 Gallop, waltz, polka, mazurka – all your total eclipse dancin’ needs covered, via this set of music composed by E. Mack and published in 1919 by Lee & Walker (Credit: Library of Congress).

Alternatively, our friend Philip Sherburne has composed a playlist timed to the eclipse’s path of totality for Pitchfork, naturally featuring everyone from Eno to Sun Ra to biosphere. Perfect — and maybe worth replaying even after the eclipse. (Not to gush too much, but Philip’s writing and playlist picks are among the best music journalism around. You’ll also be able to catch him DJing at festivals like Unsound.)

Listen Along to the Solar Eclipse With Pitchfork’s Timed Playlist

Finally, another view of the picture I’ve included here. This is just a partial eclipse, but our friends at the European Space Agency captured some exceptional imagery with their Sun-watching Proba-2 satellite, in glorious, Earth orbit ultraviolet.

Here’s a view of the 2002 total eclipse, from the ESA/NASA orbital observatory SOHO: 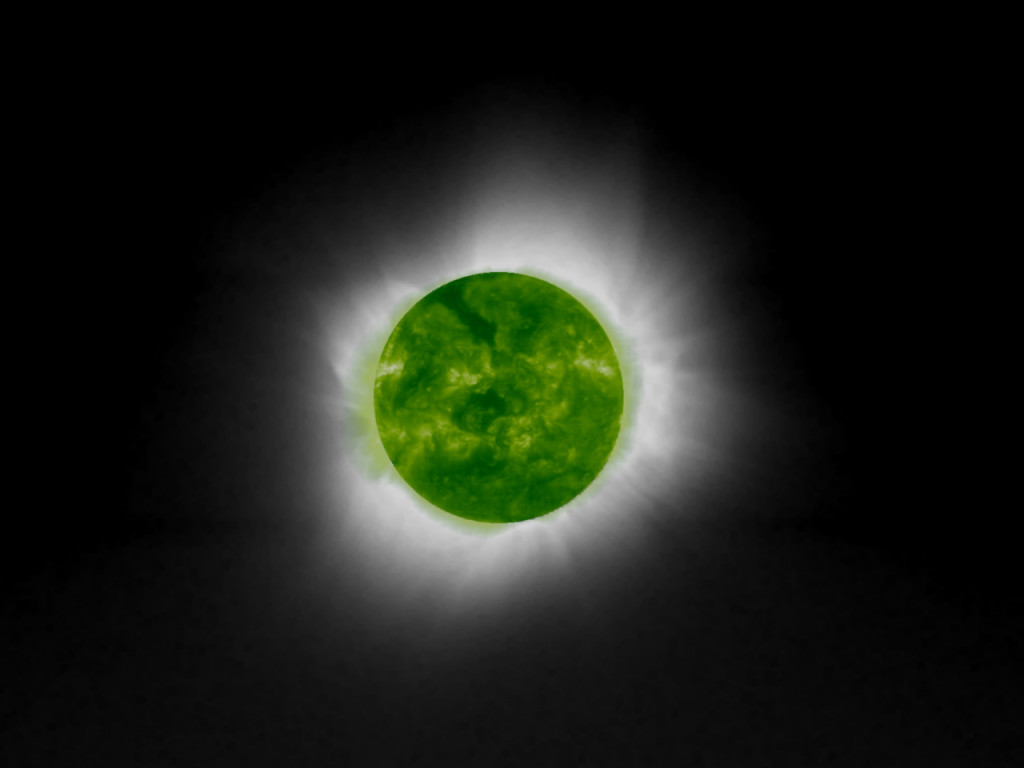 Total Eclipse of the Sun
On December 3, 2002, people in Australia received a rare 32-second celestial show as the Moon completely obscured the Sun, creating a ring of light. Solar eclipses provide experts an opportunity to study the Sun’s outer atmosphere, called the corona. This total eclipse was the first to cover Australian shores since 1976. The next is not predicted to occur for several more decades.
While people in Australia were observing the solar eclipse, the Solar and Heliospheric Observatory (SOHO) spacecraft also had its eye on the Sun. From its unique vantage point in space, scientists have been able to monitor the explosions on the Sun that can impact us here on Earth. This image combines a photograph of the solar eclipse with data taken by the Extreme Ultraviolet Imaging Telescope (EIT) instrument onboard the SOHO spacecraft. Additional NASA satellites, such as ACRIMSAT and SORCE, study the Sun’s energy output, and the effect it has on the Earth’s climate.
Image courtesy NASA/ESA
Posted December 6, 2002

Speaking of ESA, they’re a great resource for solar observation. At the CDM-hosted MusicMakers Hacklab, in collaboration with CTM Festival, we had one team working with the free and open SOHO spacecraft imagery for audiovisual performance (both as visualization and sonification).

Plans for ESA’s PROBA-3 spacecraft, which will artificially create the eclipse conditions allowing scientists to observe today. (Some scientists may be unimpressed, but birds will freak?)

Also, I call “Path of Totality” as a music project name. Dibs. (Okay, actually, have a feeling that phrase is going to come up a lot on SoundCloud in a few weeks.)

From Rane and Roland, competing visions of digital DJ gear

Hands-on: Maschine got this new bass synth in a free update