Apple’s music production tool gets a new step sequencer for rhythms, sound libraries, and Eastern touch instruments – plus it looks good on the iPhone X.

The first thing to know about GarageBand is, it’s everywhere. Apple’s generous availability of its serious, beginner-friendly producer tool means theoretically anyone with an iPad or iPhone might wind up using it. And that makes this potentially the biggest entry point to music software available (though it’s tough to say how exactly how many people take Apple up on it in practice).

For newcomers, the main reason this update matters: you get a convenient new interface for programming rhythms, some new touch instruments, and a bunch of new sound libraries.

For more advanced mobile users, none of that may be exciting, so let me put it this way: GarageBand is right now probably your best starting point for hosting Audio Unit (AU) plug-in instruments and effects. In fact, this update allows the use of full-screen interfaces, so you can use all that screen real estate – especially nice if you’re on, say, an iPad Pro. Moog’s Model 15, which I’ll write about separately, just added support for extensions to the AU format that allow rescaling, so now you can put that big, tasty Moog interface across the whole screen, then use GarageBand for recording and arrangement. 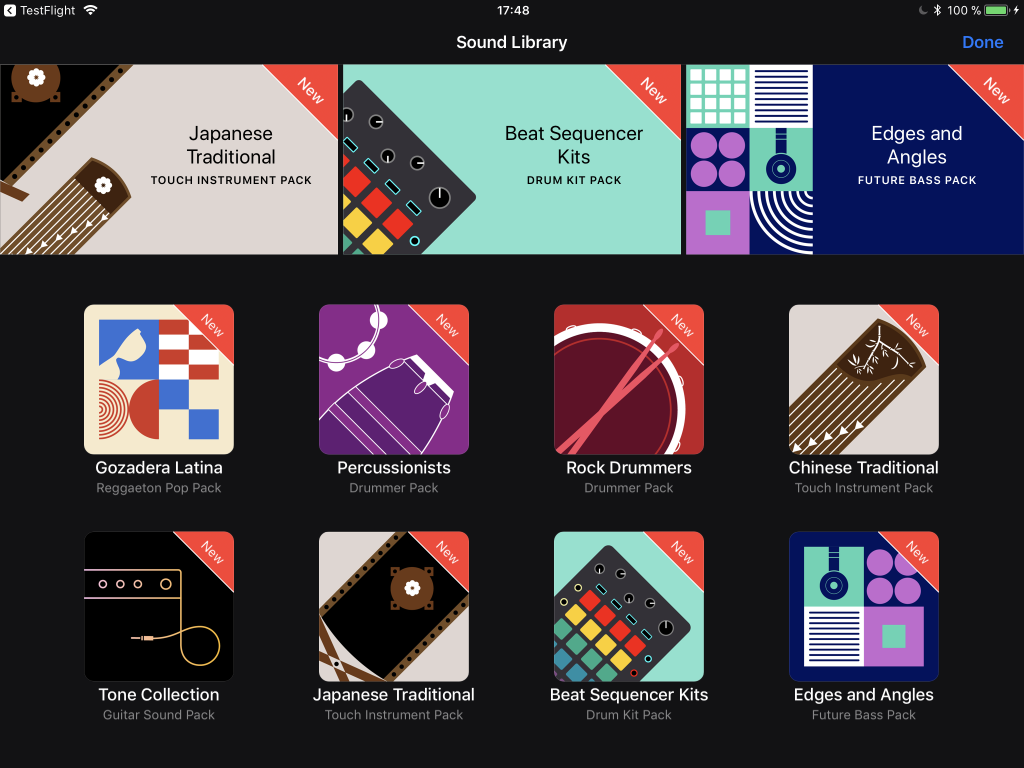 The new Sound Libraries browser interface. And… yeah, that beat-oriented one sure looks like a Novation Circuit. Just sayin’. Flattery?
Anyway, you can select and download the sounds you want here so you don’t use up all your precious storage space.

Sound libraries. Now, you get an iTunes-like interface where you can choose libraries to install. That’s increasingly the norm across desktop software, and it’s even more essential on mobile devices with limited space. (I’ve uninstalled quite a few apps, just because they had enormous libraries attached to them.)

Apple is touting a bunch of new libraries to choose from, as well. They all include some combination of loops, sounds/presets, and touch instruments. There are also new Drummers, those automated percussion arrangers we’ve seen in Logic – now with Pop, Songwriter, and Latin styles. 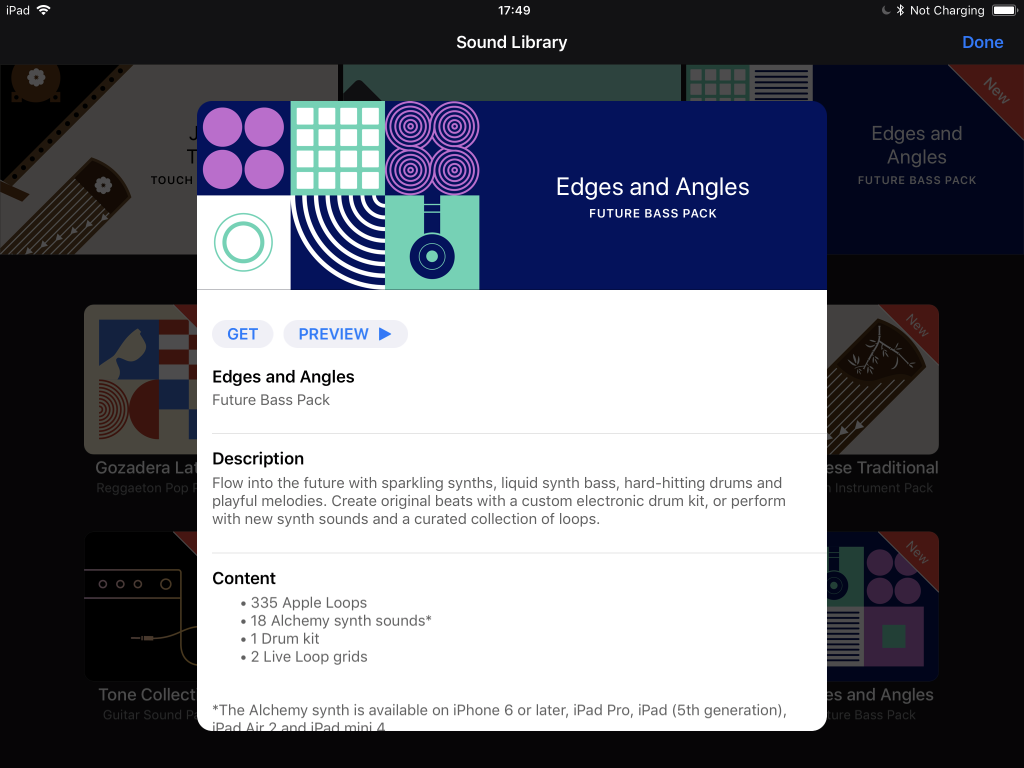 Sound libraries include a variety of different options, including presets for Apple’s powerful Alchemy.

Naturally, this covers the bases you’d expect, from pop/rock and instrumental selections to dance production. They’re all free to download. (These just come from Apple, not third parties – but then once you’re ready to grow, of course, you have the rest of the iOS music ecosystem.)

Also worth noting: when you migrate projects back to GarageBand or Logic on the desktop (including sharing with someone else), the sounds come with the projects. 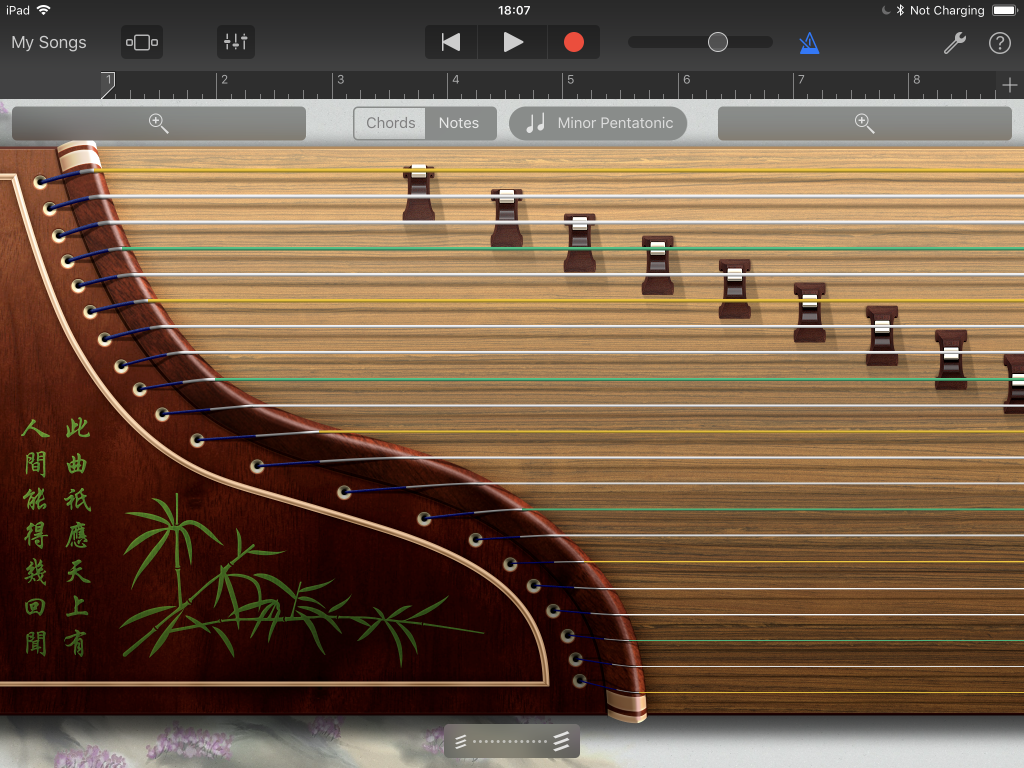 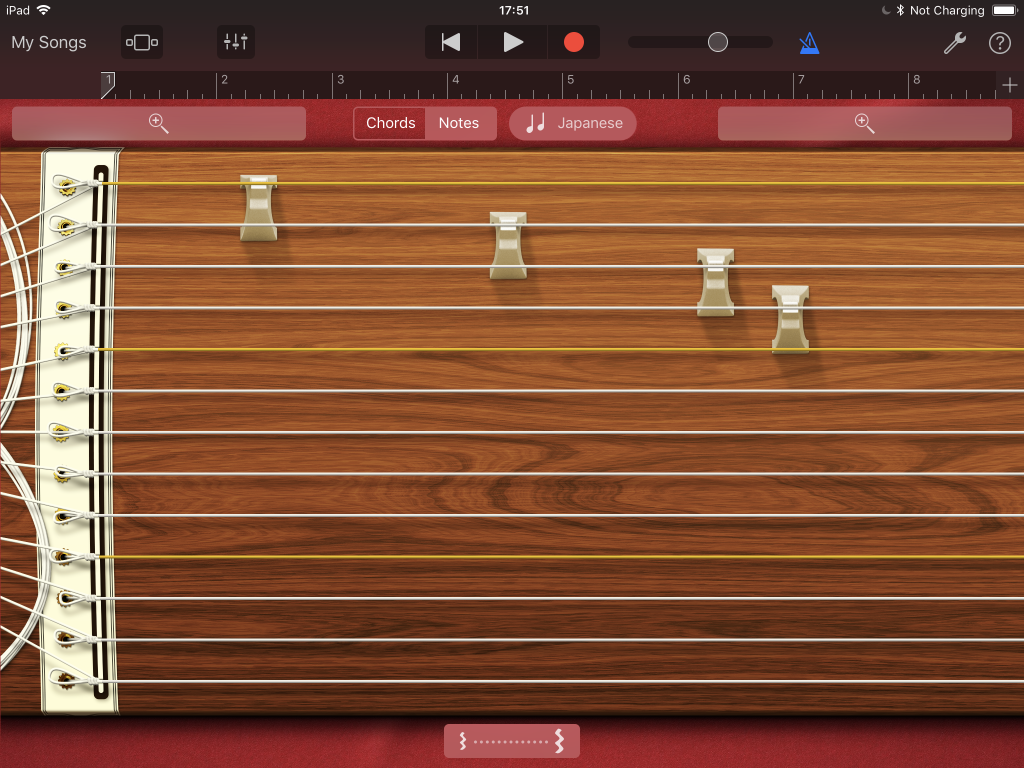 The new koto sounds especially terrific. Some creative abuse might spark some new music styles, too, outside of recreating traditional Japanese music.

New Asian Touch instruments. GarageBand’s music production tools are okay, though they’ve got a lot of competition. One place where Apple really shines – and the thing that’s fun to play with even if the rest might bore you – is their touch instruments. They’re just a lot of fun. Now you get, from Japan, Koto and Taiko Drums, and from China, Guzheng.

Clearly, both the Chinese and Japanese markets are growing, especially in mobile, which may be relevant here. But these are also clearly ready for anyone who wants these sounds, too.

Installation required. To save space, these aren’t all there by default. Using that new Sound Library feature, you can install some of the optional choices (Japanese Traditional, Chinese Traditional).

The instruments are found in different spots. Once installed, you’ll find the Koto and Guzheng added as icons under “World,” the Taiko Drums under “Drums,” then “More Sounds > Japanese Traditional.”

Set the scale. There’s a scale selection option so you can constrain the notes you play, for authenticity or … not.

Record away. Even if you’re not a big GarageBand user, it’s fun having instruments like this – and those based on Alchemy and other instruments in Logic – available when you tether your iPad to your desktop, too. So try the new audio driver available in iOS 11 to record, or try a tool like studiomux. 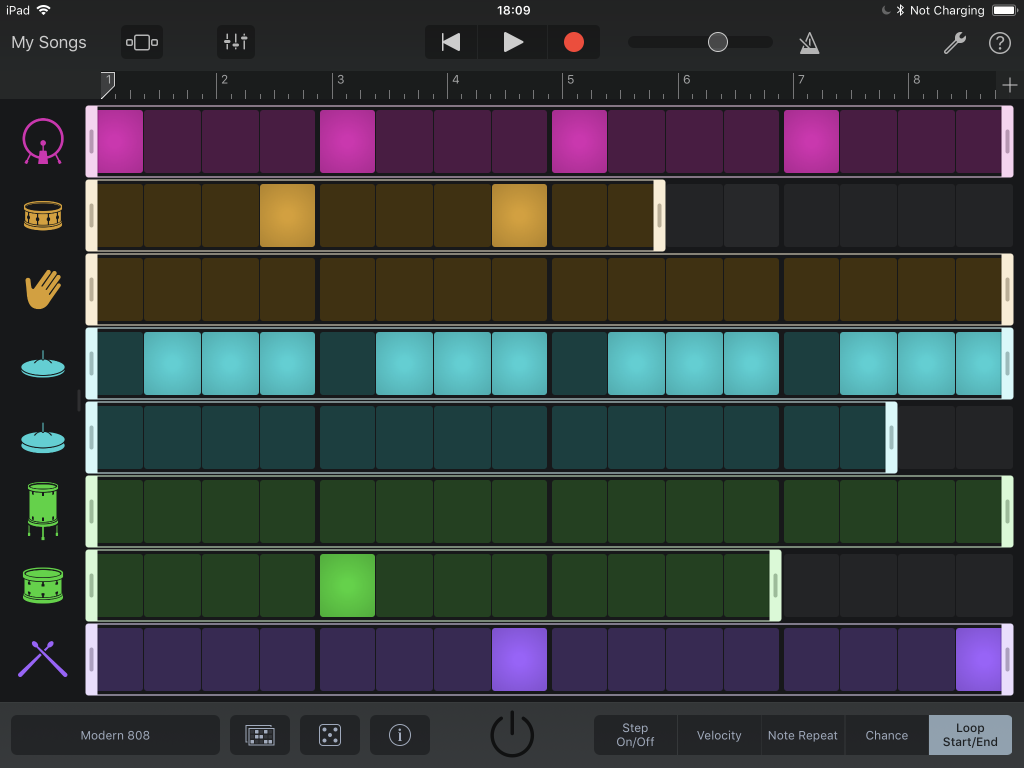 Beat Sequencer. Yes, you can polyrhythm. Loop start and end per part lets you set up different loop lengths. And the overall sequencer ranges from 16-64 steps, making this whole feature more powerful than it might first appear.

Beat Sequencer. This is just a step sequencer for the drum parts – one that’s kind of overdue in GarageBand. It’s very easy to approach for new users, though.

If you want to dive in deeper, there’s more hidden there:

Tap for more settings per row. Here, you can determine playback direction/random steps, and customize the kit sound and step length. 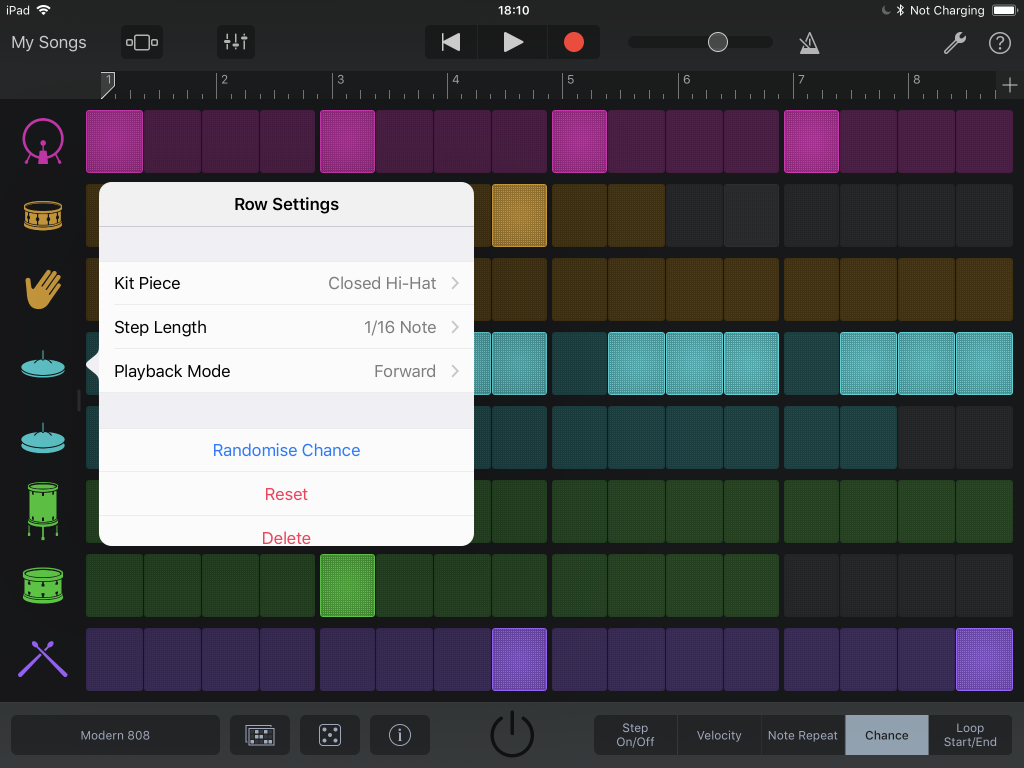 Save patterns. Record to a song, or save directly in the pattern browser. The latter is nice if you want to make a bunch of patterns on the go, then import them for arrangement later.

Live audition. You can audition different kits without stopping the sequencer and hear the results live.

Step edit. There are actually a lot of per-step edit functions: Velocity, Note Repeat (for sub-step rhythms), Chance (the likelihood it will play), and Loop Start/End. 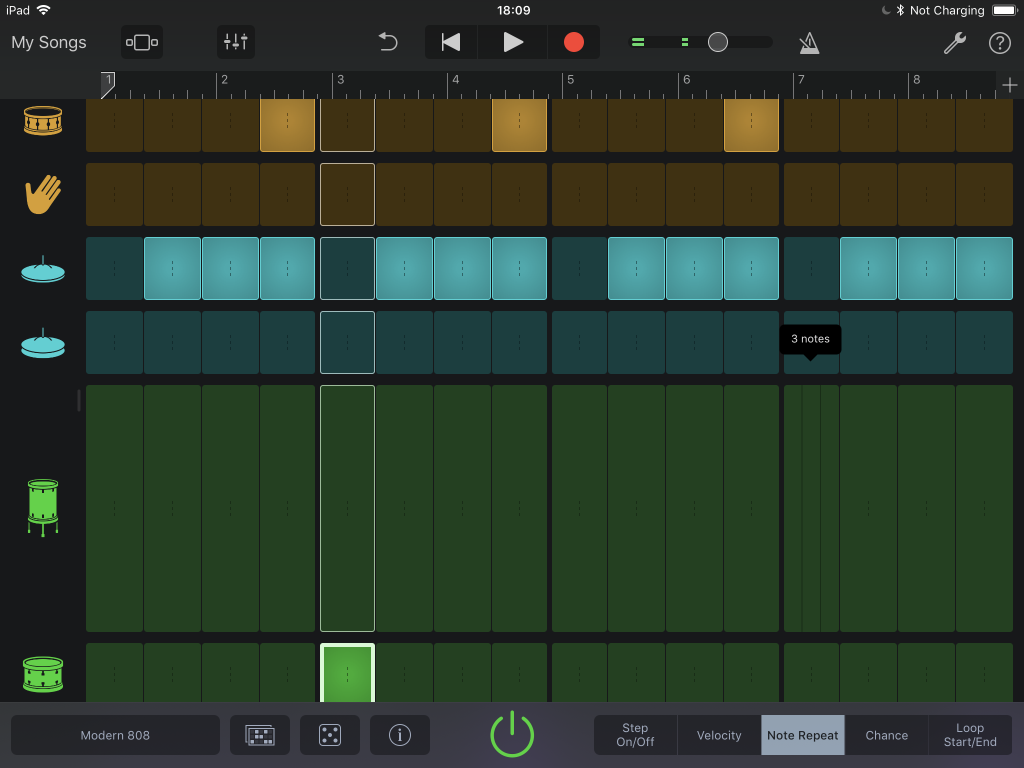 16-64 step length. The pattern length can be extended, too. Oh, and this is interesting: it automatically copies steps when you expand.

To me, this sequencer is probably the best feature in the update.

iOS 11 support. So, that convenient Files thing – you can now use that to use a Mac-style file system on your iPad and iPhone, at last. 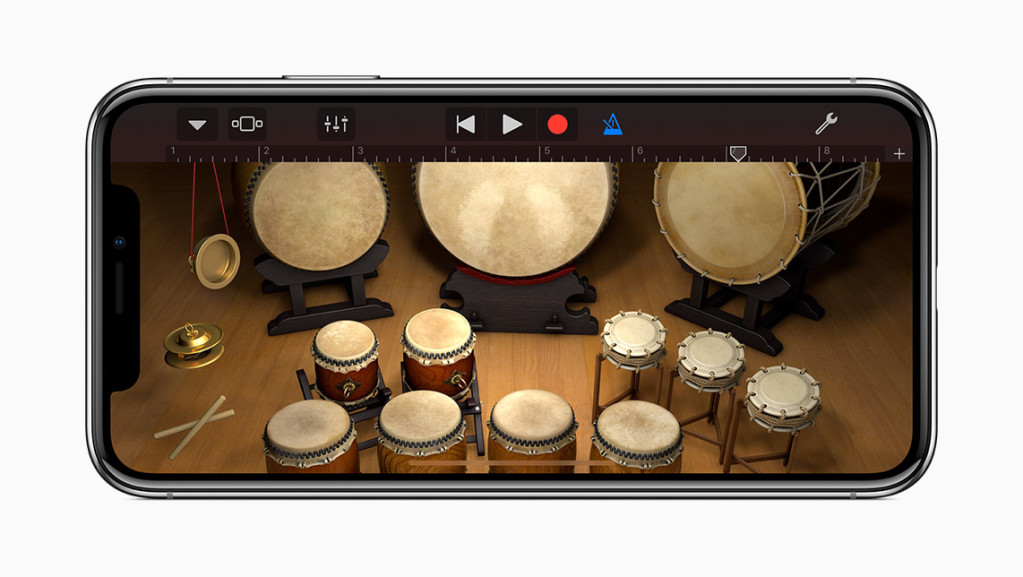 iPhone X. Yes, the GarageBand interface has been adjusted so it looks great on that ultra-high res display on the iPhone X. Or so I’ve been told… I’m still on a 6S.

For Logic users. In addition to porting your projects back to GarageBand on your Mac, you can open them in Logic, too.

Logic Remote also gets some updates: chord strips on iPhone displays for touch control, not just on iPad, and Super Retina support on iPhone X.

It has to go to eleven. There’s just one catch: you will need iOS 11. I’ve had some pretty significant reliability issues on an iPhone 6, and confirmed those with some other developers and testers. (I’ve just updated to 11.1, and hope that fixes this.) So, serious mobile music producers, you might want to sit on this for a little bit. (I’ve heard fewer reports from the iPad, but you’ll want to make sure all the apps you use are 64-bit ready, as the update drops 32-bit support.)

GarageBand is available for free today on the App Store.