Moog’s Mother line have all had patch cables. Now, the Grandmother adds something else – keys. Oh, and a heck of a lot of colors. We talked to Moog to get the inside scoop on the new Grandmother.

Patch-ability is all the rage these days. There’s the rack modular scene, of course. But then we’re increasingly seeing patch points on desktop synths and keyboards, too. The idea is, you can create different modulation effects and a wider range of sounds by changing the routing of signal through the instrument. And while that’s possible on some electronic instruments using switches or menus or other features, here you just plug a cable from one point to another.

Moog’s own Mother-32 brought that concept to their modern desktop rangorie, followed by its drum synth sibling, the DFAM (Drummer From Another Mother). Now, it’s the Grandmother’s turn. (Any bets on whether they’ll keep going with ‘mother’ names after this?) 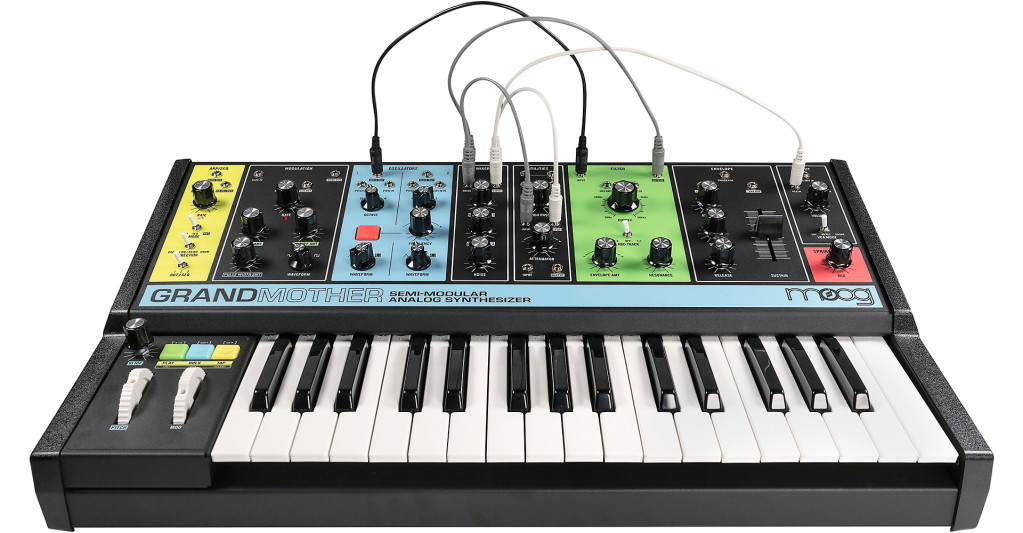 The Grandmother moves the patch points out of the big matrix found on the side of the Mother-32 and DFAM, and distributes them across the hardware. That makes it a bit easier to follow where signal flow is – though you’ll also need longer cables.

And you get keys.

Plus this definitely comes in colors, as you may have noticed. The Grandmother plays up the modularity by color coding each section individually. At first glance, it appears as though the Grandmother is a rack of separate modules, but that’s just a visual flourish – it’s an all-in-one design. (If you do want a keyboard that lets you change modules, see products like Waldorf’s kb37, or Arturia’s RackBrute, which attaches to their MiniBrute range, or any number of boutique products.)

That makes a really interesting instrument, though I think it’s worth noting that some of the competition comes from Moog itself – the SUB PHATTY has a pretty powerful architecture for roughly the same price, and while it lacks those patch points, still has some flexibility for routing modulation and analog I/O. It also has patch storage.

But I think there’s more to the Grandmother than specs, and the formula runs like this:

Adrian Younge did this wonderful artist video that demonstrates that:

We talked to Moog Music about the thinking behind the Grandmother. Here’s what we learned:

Lots of space for patching. Moog emphasize that you can play this instrument even without patching anything if you want. But if you do want to take advantage of the semi-modular side, now there’s room to grow – figuratively and literally. Moog tell us:

In designing a keyboard instrument, we have more panel space than we do in the pure eurorack format (where space is always a consideration), giving us more room for the patch points. The patch point locations also make connecting cables to other devices, like Mother-32, DFAM or Eurorack much more convenient.

Having said that; Grandmother can do extremely complex things, particularly through patching. For seasoned synthesists, all normalizations can be broken and Grandmother can function as a fully modular instrument.

The Grandmother can be a modular gateway. You can patch the Grandmother, DFAM, and Mother-32 in various combinations – or it can be a gateway to Eurorack. 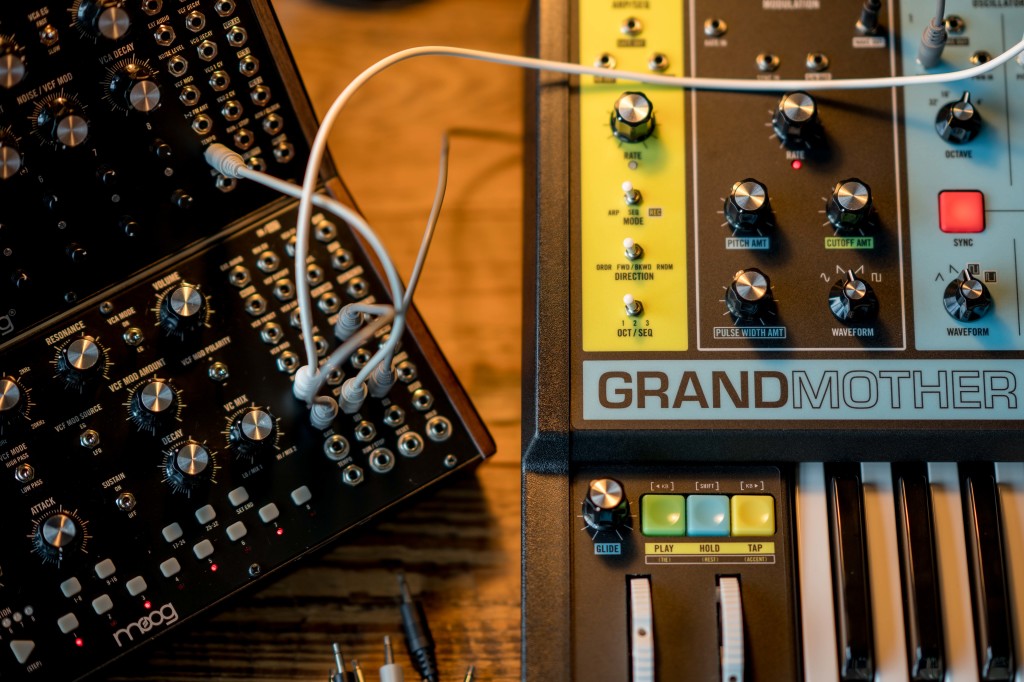 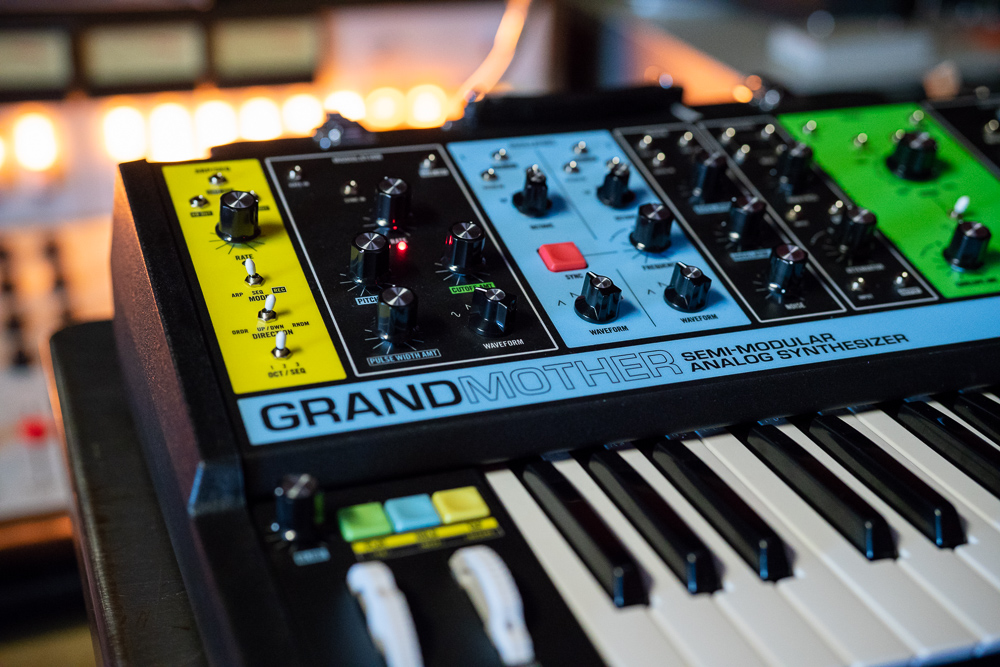 About those colors. Moog will definitely get your attention with that color coding. It’s obviously partly there for show, partly to make it obvious that the different sections have different functions. And back to the original Minimoog, our modern subtractive synths are essentially all derived from combinations of modules.

There is some history here. Moog points to their Sonic Six, the Concertmate / Realistic MG-1, and the Moog Source as instruments that all carried the Moog name with “bold” colors. That’s actually a little surprising – Moog haven’t traditionally focused much on those chapters in their legacy, as they’re not connected with Bob Moog. (Not to be blunt, but that’s like talking to Ford PR and having them compare something to the Edsel. The Sonic Six was part of the Musonics era, the MG-1 was just some colored highlights on a black background and was made for Radio Shack, and the Source was distant from Bob Moog’s involvement in the company.)

To me, the Grandmother really has the most in common with the Sonic Six. It used just one color, but the color overlay was meant to suggest the modular structure beneath.

But let’s just own it: the Grandmother is easily the most colorful Moog synth ever. And some people will love that. Moog doesn’t have to only mean “brown.”

The keybed. Moog: “It’s a Fatar TP-9 with velocity sensitivity, which is a really great and solid feeling keybed.”

You can gate the keyboard. Moog points out something else of interest:

“One other thing worth mentioning is the ( Envelope / Keyboard Release / Drone ) switch on the VCA. Envelope and Drone may be obvious, but the keyboard release selection is actually very useful. It works like Keyboard Gate on older Moog synths, where a pressed note immediately sets the VCA to maximum sustain level. The difference is when a note is released in this mode, the VCA will follow the release setting of the Envelope. This option opens up a lot of added possibilities while keeping the panel fast and easy to use.” 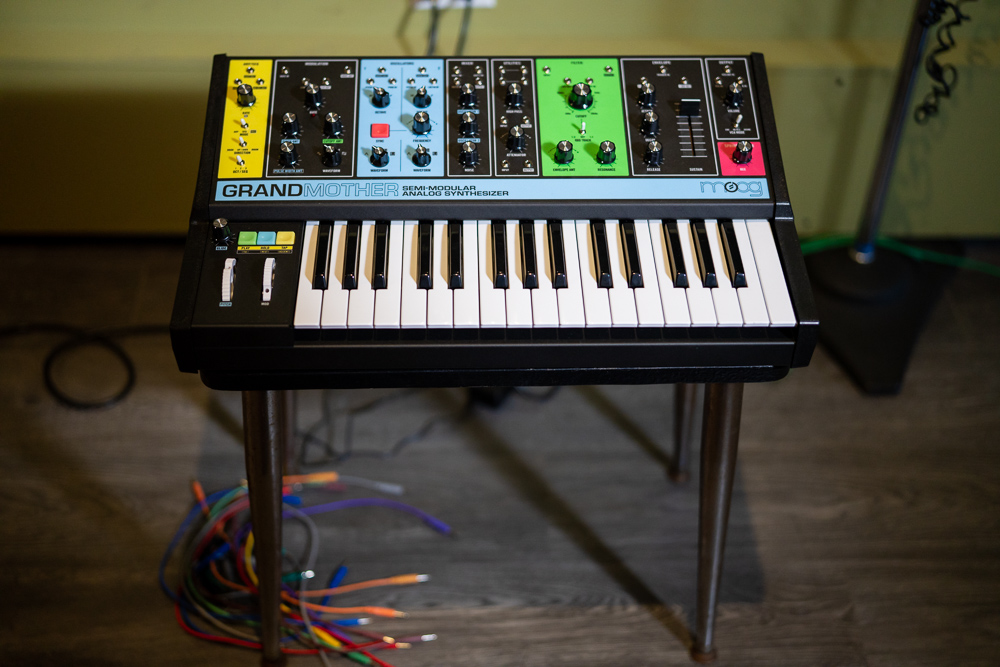 Built in the USA. Yep, these do get put together in Moog’s factory in North Carolina. 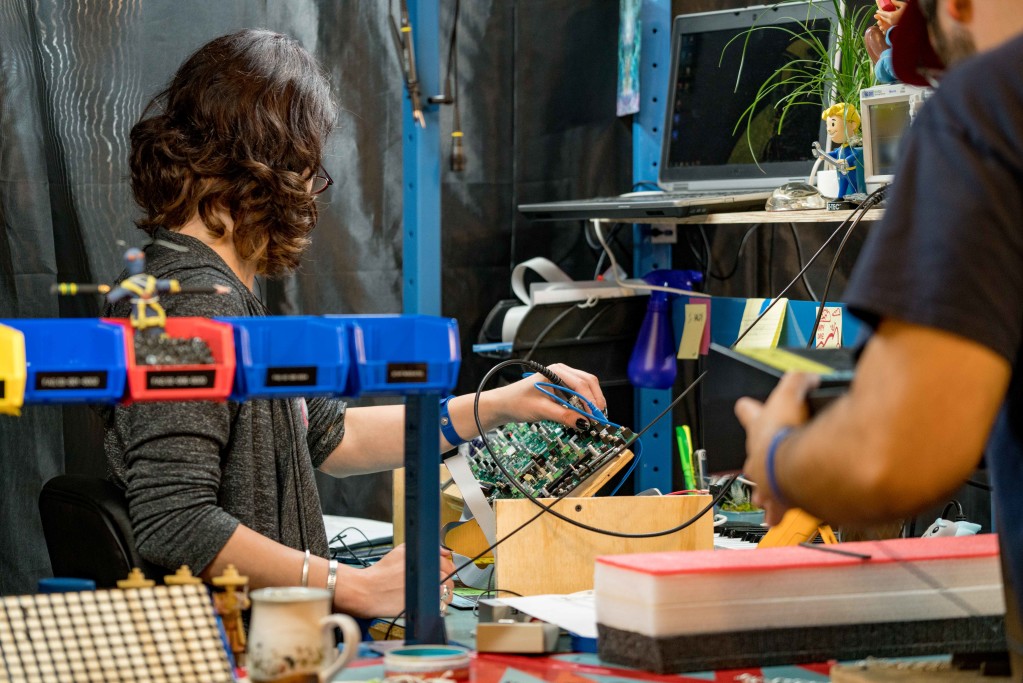 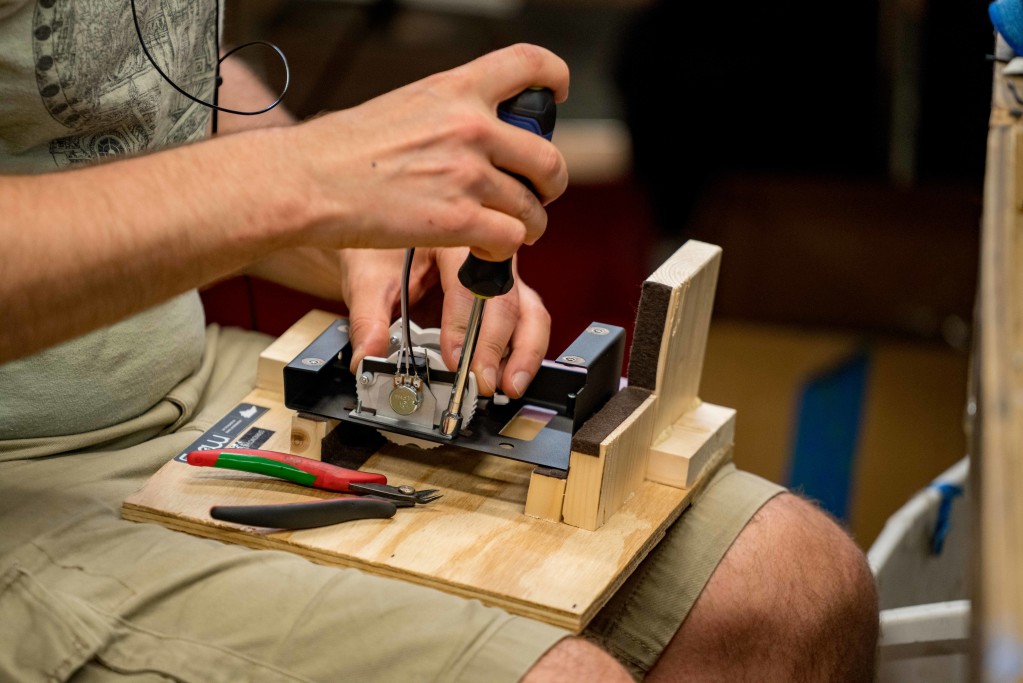 For those near Durham, NC this week – Guitar Center will have Grandmother synthesizers available for play and purchase starting 10:00am this Thursday at the Moog Pop Up Factory (free and open to the public), where visitors can also watch as we live build the new instrument on site. Then at 3:00 on Thursday, Moogfest attendees can hear Grandmother used in a long-form Moog drone performance guided by Nick Hook and Gareth Jones of Spiritual Friendship.

This Stylophone business card is the best music nerd handout ever

analogkeyboardssynths
The Oberheim OB-X8 is a beast – here are more sounds from it, straight-up
analog
The best way to integrate Ableton Live and Eurorack modular – for any rig
Moog
MIDI Polyphonic Expression has been updated with one powerful feature: better documentation
analogsemi-modular
Dreadbox’s new 200€ Dysmetria kit is an insane amount of analog groove fun