One way to keep laptops from disappearing from DJ setups: let more laptops come to the party. Pioneer’s new US$999 flagship controller for Serato does just that, with more connections and two independent USB audio interfaces.

You might expect the monster, flagship controller for DJs to simply fade away – replaced by either standalone hardware at the higher-end, or more mobile devices on the go. But someone must be buying these things, because they keep showing up. Serato’s steady parade of performance features in DJ Pro offers good reason to be loyal to the software, while both Pioneer and Roland vie to give those users solid controllers.

In the case of the DDJ-SX3, this revision emphasizes getting more social – bring more humans in on your session, and connect their mics, instruments, and laptops more readily. And sure enough, with a $999 list in the USA, you do get a lot of functionality – standalone mixer and Serato control surface, both.

It’s also telling that Pioneer place the film about the new release in a studio situation, featuring Mr Woodnote and Mr Switch in the intro:

What’s interesting about the RX3 is in an otherwise incremental update, the new gear, shipping early in June, focuses on stuff that lets DJs relate to crowds and one another:

There’s dual USB support. There are actually two independent USB audio interfaces here — one for each USB port. That means changeovers between laptops are seamless, one laptop doubles for the other if one crashes or catches fire or gets stolen or has vodka spilled on it, and you can also seamlessly play back to back [B2B]. So you can play, someone else can plug in and join in. You can play a few tracks, then switch off. Switch off every track. You get the idea.

More mic. There are twin mic inputs on the rear of the controller, plus a third dedicated mic input on the front. So the front mic lets you talk over a four deck (or two laptop x two deck) setup without occupying a mixer channel, and also keep two mics

The SX2 had the two rear jacks; the SX3 has the three mic configuration. Pioneer and Serato have also added more processing options for the mic: level, EQ, low-cut filter, reverb, compressor, plus (with Serato connected) Serato’s own “color” effects.

So let me explain something. Sitting here in the middle of Berlin, a bunch of minimal/industrial techno DJs are welcome to get puzzled by what I just described. But that’s because you don’t do anything with microphones at your parties. Obviously people who do will find this very useful. (And, hey, techno heads, you could. I just watched Juan Atkins and Model 500 last night, and those guys use mics on every single song. Plus easy mic access could mean this DDJ works well in radio / podcast / streaming situations, too – without requiring an additional mixer.)

Lower latency jog wheels. One of the things I really liked about the new Roland controllers for Serato is their support of extreme low latency. That’s essential if you’re playing with sync turned off or even want to scratch with the wheels as some do.

Pioneer and Serato promise improved low latency performance. That’s a combination of a lot of factors. Pioneer wouldn’t confirm any solid numbers to CDM – those may not matter much, anyway, as what you really want is a test of real-world performance. But they did say the performance gains are “because of mechanical, software, driver and firmware improvements.” All of those elements do contribute to jog wheel latency, so I’m encouraged that they’ve addressed each step of the process. (And frankly, because Serato users are loyal to that DJ software, Serato should want both Roland and Pioneer gear to exhibit that performance.) 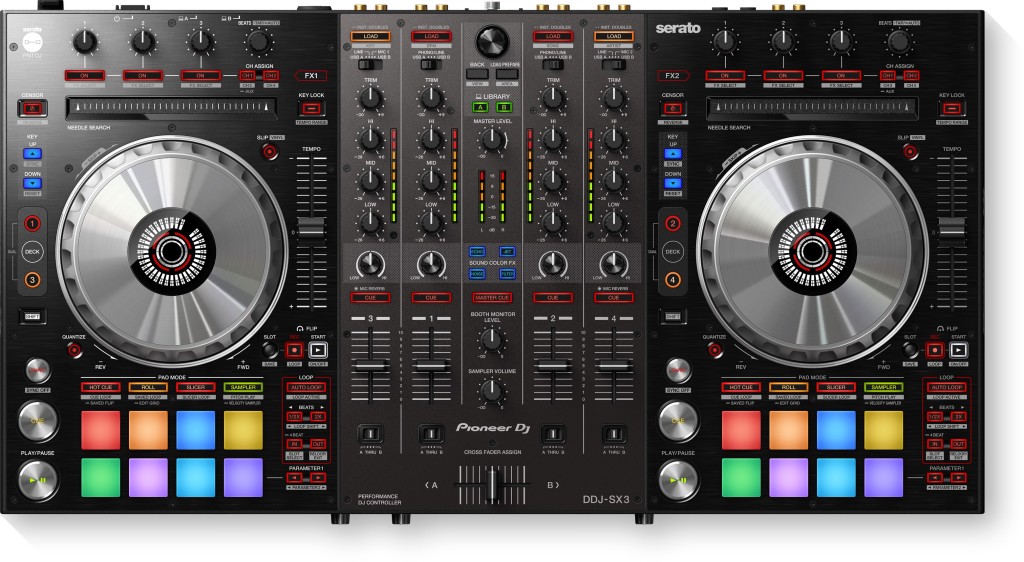 And the rest. Otherwise, the value proposition of the DDJ-SX3 is the same as the first DDJ-SX2.

You get a standalone DJ mixer with loads of I/O, combined with a controller with Serato DJ Pro features. The Serato side is all about those performance pads for hot cues, sampling and “Pitch Play”. Plus there’s Serato Flip (coupon included), and the option of upgrading to vinyl control features with Serato DVS. (I need to research where their video functionality fits on this controller.)

Pioneer and Serato also easily one-up Native Instruments by giving you both jog wheels and a touch strip for quick access. I think it’s all but certain we’ll soon see a refreshed TRAKTOR with similar functionality – touch strips are great, but just not all the time.

Where this fits in. Pioneer’s DJ controller line is now kind of dizzying, with a range of controllers for their own rekordbox software from compact to huge, and another line for Serato.

That includes what they call the flagship, the SZ2, which is even bigger. Confused yet?

But no mind. I think if you want Roland drum machine stuff built in, you’ll go with one of those controllers. If you want an all-in-one controller/mixer to use in the studio and then take with you, and you fancy the idea of other laptop artists playing, the SX3 is the one to beat.

The Roland options for Serato have those nice Roland drum machines and such built in, handy for producers. And the Serato options for their part efficiently target DJs doing edits, podcasts, and then transporting Serato practice from home/studio into the club directly.

The rekrodbox options are nice enough – the DDJ-1000 has big jog wheels with on-wheel displays, like a CDJ.

But to me, the big use case for DJs playing clubs on CDJs – which is now a whole lot of you – is going to be just finding something at home to practice on. rekordbox may play into it, but as organization tool for USB sticks before anything else.

So for the CDJ DJ, it still seems to me you’re likely to either beg and borrow time on actual CDJs, or buy used CDJs and a mixer, or consider all-in-one Pioneer offerings.

What I like about the all-in-one offerings is, you get standalone hardware that doesn’t require a computer, and still lets you practice on your rekordbox-ready USB sticks before you, like, trainwreck on some CDJs and empty the floor. More on that topic of practice gear soon. I would rather see DJs enter clubs prepared and comfortable than … not.

Here’s the thing: rekordbox and Serato now have a real corner on hardware choice. And Pioneer, by far, has every market segment covered, from entry-level mobile to high-end player to everything in the clubs. It’s kind of getting to be “which Pioneer stuff do I want?” – even for Serato users.

I could fault Pioneer for that, being the juggernaut they are. But then, it’s not just scale or the “industry standard” impact of the CDJ or market domination. If DJ makers want to compete, we’re going to need some new ideas.